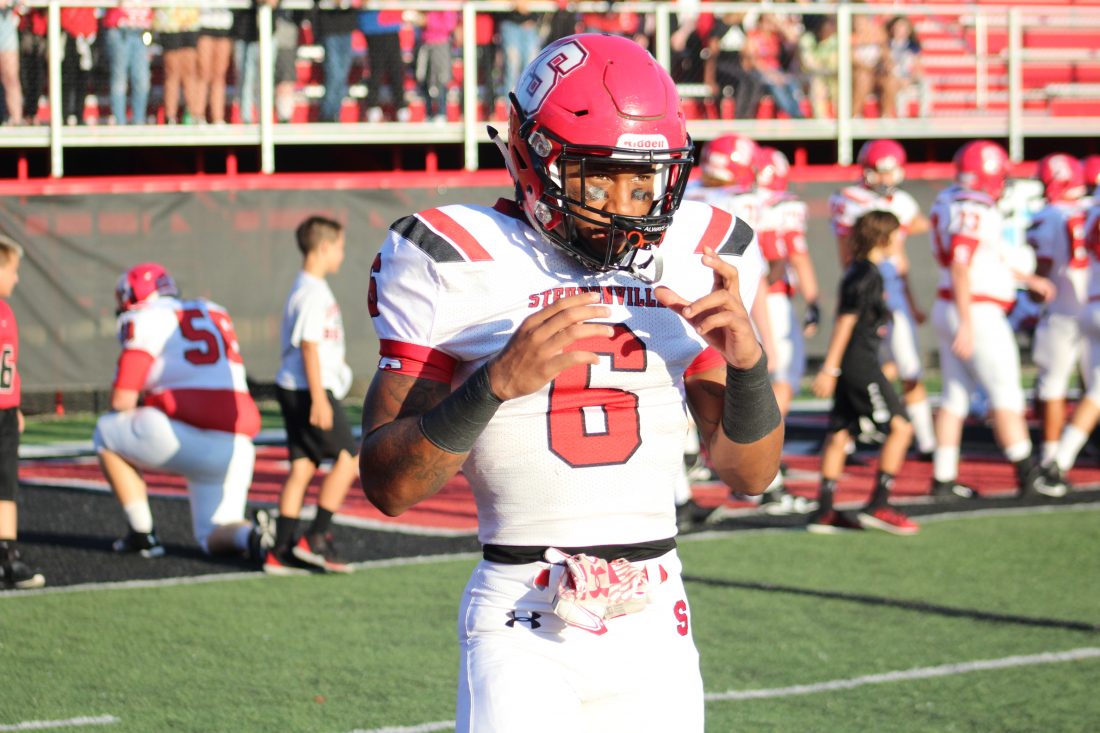 STEUBENVILLE — Suffice it to say, Big Red’s Tayveon Crawford had a football season to remember.

The talented senior tailback rushed for 1,902 yards on 281 carries (he averaged 6.8 yards per trip) and scored 27 touchdowns as Big Red posted a 6-3 regular season record. For his efforts, Crawford was named the Division III Eastern District co-offensive player of the year.

Crawford, who shared the honor with New Philadelphia quarterback Baron May, added 187 yards and a score in Big Red’s 27-21 playoff loss to Aurora. Thus, his final 2019 stat line read 2,089 yards on 309 carries and 28 touchdowns. He also caught nine passes for 91 yards and a score.

Crawford became the focal point of Big Red’s powerful rushing attack in 2018 after Caleb Mitchell went down with an injury. He finished the regular season with 1,414 yards and 14 touchdowns. During the final four weeks, he rushed for 909 yards. His performance in two postseason games gave Crawford 1,756 yards and 18 scores for the campaign.

Following his junior year, Crawford was named the Eastern District Division IV co-offensive player of the year and was a first- team All-Ohio selection.

His 2019 performance moved Crawford to second on Big Red’s list of all-time single season rushing leaders. Puck Burgwin leads the list with the 2,126 yards he gained during nine games in 1931. Crawford’s 28 touchdowns put him in a tie for third with Nate Johnson on the all-time single season touchdown leaders. Finally, his two-year total of 3,845 places him third on Big Red’s all-time career leading rushers behind Burgwin and Nate Hubbard.

“I’m extremely proud of all the hard work he put in for us during his Big Red career,” Reno Saccoccia said of Crawford. “I am also very proud of the way he remained humble.

“I’m sure Tayveon and all of our players who earned all-district honors are appreciative of the people who voted for them. I’m hopeful they are just as humble as they were when they started with the Big Red program.”

Joining him on the offensive unit was junior center Eli Burgey.

“He took excellent care of the football,” Saccoccia said of Burgey. “He had a 91 percent blocking grade against some outstanding defenses, recorded 47 pins and was an outstanding pass blocker for us.”

Tuttle was as second-team choice as a junior. During his final regular season, he recorded 97 tackles, had three interceptions and recovered two fumbles. He also rushed for more than 280 yards and scored five touchdowns from his fullback spot. He was four for four in short yardage situations. Tuttle also had a pass reception for a score.

“He was our leading tackler for two seasons,” Saccoccia said of the Tuttle. “He did a great job for our defense.”

Kausky collected 65 tackles during the regular season and six sacks. He caused three fumbles and recovered two. He gained a little more than 200 yards and scored two touchdowns as a fullback. He was seven for seven in short yardage situations.

“He worked hard on both sides of the ball for us,” Saccoccia said. “He had an outstanding career.”

From his secondary position, Mitchell recorded 29 tackles, caused two fumbles, recovered one and has three quarterback sacks. He had 31 passes thrown his way, defending 23 and coming up with three interceptions. Five of the passes were completed and just one resulted in a touchdown.

“He was a three year starter at boundary corner for us,” Saccoccia said. “He also did a great job during his career.”

Mitchell also had a solid year at quarterback for Big Red. During the regular season, he completed 87 of 134 passing attempts for 1,045 yards and 11 touchdowns. He added 286 rushing yards. Against Aurora, he threw for one score and ran for another.

Stone Biacco, Big Red’s leading receiver, landed a spot on the second team offense. Biacco, who Saccoccia called an excellent blocker, recorded 31 receptions during the regular season for 490 yards and four touchdowns. He also returned seven punts for 91 yards and eight kickoffs for 127 yards. In the Aurora game, he caught a 6-yard scoring strike from Mitchell.

“Our players that received all-district honors deserved it,” Saccoccia said. “I want to congratulate them all. They were rewarded for their hard work and leadership.

“I hope they remainder of our team also appreciates the efforts those guys gave us. I’m sure the entire Big Red family is proud of them and wishes them nothing but the best as they move forward. I’m truly appreciative of the honors our guys received. These are honors that should be shared by the entire team.”