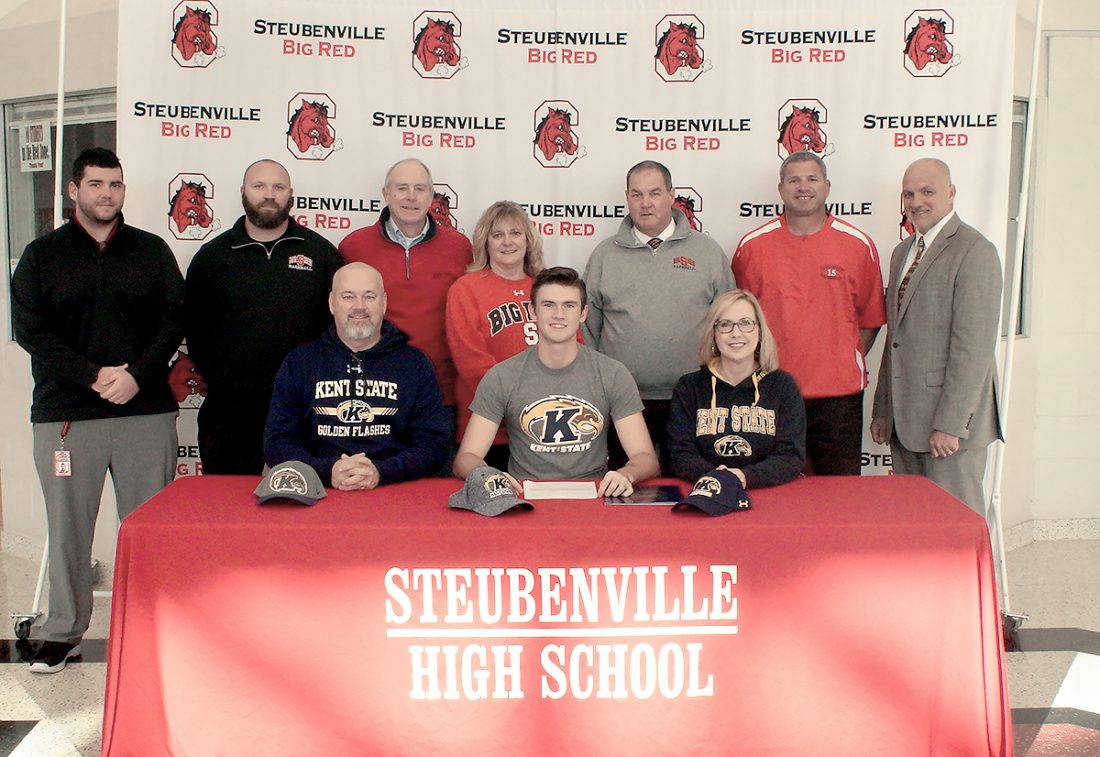 STEUBENVILLE — The ace of Big Red’s pitching staff will see his career extend beyond his days on the mound at Vaccaro Field, as Calvin Bickerstaff signed his letter of intent to play baseball for Kent State University Wednesday morning.

“It means a lot. I have been waiting for this day for a while now,” the senior said. “I have to thank my parents and my coaches, coach (Fred) Heatherington, (Joe) Pierro and (Justin) Banks. I couldn’t have done it without any of them.

“It’s just a lot of hard work, and it doesn’t stop here. I have to continue to improve at the next level and perform there.”

To Heatherington, the accomplishment is about the time the hurler has put in.

“Calvin is the epitome of a Steubenville Big Red student-athlete,” the veteran Big Red coach said. “His hard work and dedication have allowed him to mature mentally and physically. Calvin is going to a great university with a great pitching coach in coach (Mike) Birkbeck. They are getting a great player and person in Calvin Bickerstaff.

“We at Big Red wish him the best when his next journey begins.”

Bickerstaff, a 3.95 GPA student, will major in applied engineering, while pitching for the Golden Flashes and head coach Jeff Duncan. He will be joining a team that went 30-24 last season and finished third in the MAC, with a conference record of 17-8.

He has a career record of 19-4 with a 1.09 ERA and 127 career strikeouts. He has recorded at least 40 strikeouts in each of his three seasons. Despite missing a portion of the season with an injury and being limited to 37 2/3 innings a year ago, he still went 5-0 with 0.55 ERA and 43 punchouts.

While a standout pitcher, he also has done damage with the bat, hitting .343 with 30 RBIs in his high-school career. Last season, he hit .346 with 21 RBIs.

“His freshman and sophomore seasons, Calvin threw strikes and was always around the strike zone,” Heatherington said. “He came into his junior year working on a change-up and a curveball to his arsenal. His command of the strike zone was phenomenal.”

Aside from the stats, his other qualities set him apart.

“His leadership skills have risen to the level of his determination to be the best and do his best at all times,” Heatherington said.

As for what drew him to Kent State, it was the perfect mix of competitiveness and proximity to home.

“It’s a beautiful campus, and the coaches are phenomenal,” Bickerstaff said. “It’s a place where I am going to get better and continue to play for championships. Just knowing that it’s a winning program is exciting.

“It’s close to home, which I love about it. It’s an important thing, especially for my parents to be able to come up and watch me play. They are my biggest supporters.”