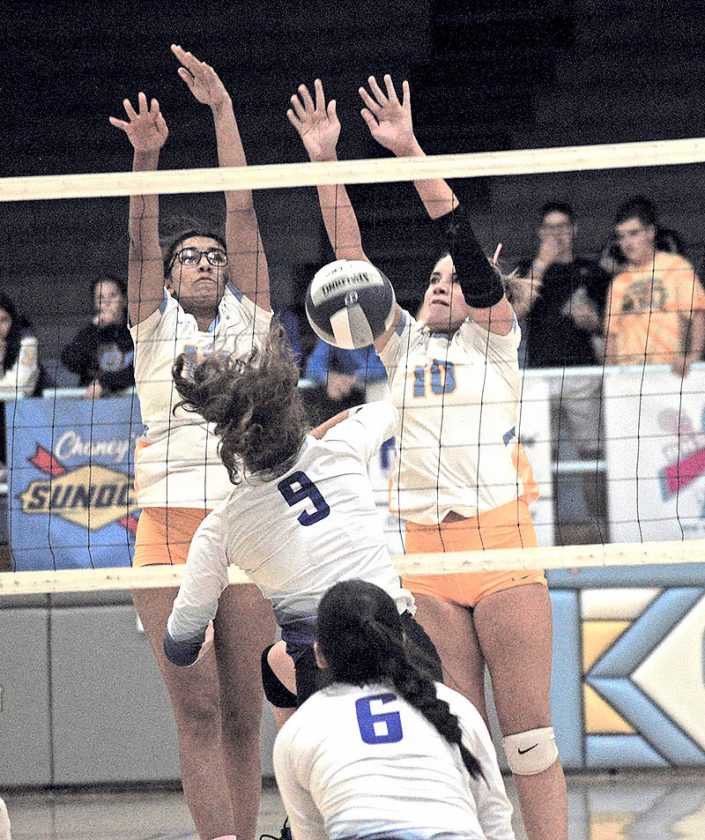 GOING UP — Oak Glen’s Skye Stokes, left, and Hannah Rogers attempt to block a shot from Cambridge’s Sydney Knaup during the OVAC Class 4A semifinals on Tuesday. -Chris Rambo

NEW MANCHESTER — The East Liverpool volleyball team is heading for another OVAC 4A final. This time, there will be familiar face waiting on the other side.

The three-time defending 4A champion Potters punched their ticket to their fourth-straight OVAC final by dispatching second-seeded Beaver Local, 25-8, 25-19, 16-25, 25-21 in 4A semifinal action Tuesday at Oak Glen High School.

In addition to being a rematch of last season’s OVAC final, the Potters will be going against former teammate Skye Stokes, who transferred to Oak Glen after earning All-Ohio honors at East Liverpool last season.

“It’s going to be exciting,” East Liverpool head coach Kelly Kiger said. “We’re familiar with her, we know what she does. That doesn’t mean it’s going to be easy — she’s a great player. We just have to be prepared.”

After helping East Liverpool defeat Oak Glen in last year’s final, Stokes said she is looking forward to the chance to play her former teammates.

“I still keep in touch with some of the girls over there. I think it’s going to be a really exciting match,” Stokes said. “There’s going to be some tension, but I’m looking forward to it.”

The schools normally play each other during the regular season, but did not meet this year after East Liverpool dropped Oak Glen. Now that they get a chance to face each other, East Liverpool’s Emma Ludwig said the Potters are going to focus like any other match.

“We’re not even going to think about any of that,” Ludwig said. “We’re going to prepare the same way we do for any other match and go out there and play hard.”

The Potters came out for their semifinal against the rival Beavers like a team on a mission and dominated the first set. After East Liverpool rolled to a 10-1 lead in the second set, Beaver Local stubbornly refused to fade away and made the Potters earn every bit of their victory.

“We knew it wasn’t going to be easy against them even after the first set,” Ludwig said. “They have a really good front row and two big middles. We knew our back row was going to have to step it up and they definitely did.”

“Beaver Local is really scrappy, and they give nothing away easy,” Kiger said. “Tonight came down to effort, and I’m really proud of my team. They worked really hard.”

“When we stepped out on the floor for the first set, I don’t know if we were ready to face this match,” Beaver Local coach Sarah Lowe said. “We know East Liverpool is a really good team, and we prepared really well. We just didn’t step out of the gate ready to play.

“It seems like that’s been a trend for the last two games, and it’s something we need to work on. I’m just glad the girls were able to battle back hard.”

The Golden Bears were not without a few moments of drama in their match against Cambridge.

The Bobcats hung with Oak Glen step for step in the first set and pulled even at 23-23 before the Golden Bears came out of a timeout and landed the final two points.

The Golden Bears overwhelmed the Bobcats in the second set, but Cambridge again hung tough in the third and closed within 24-23 before coach Morgan Poling’s squad slammed the door.

“We faced a little adversity tonight, and I’m very happy with how we handled it,” Poling said. “We faced down the tough moments head on. Our heart and our teamwork have impressed me all season, and it really showed.”

The Golden Bears showcased all of their well-rounded ability, with Hannah Rogers racking up 11 kills and six aces, while McKayla Goodlin had nine kills. Stokes did a little bit of everything with six kills, six digs and two aces. Jaedyn Hissam kept the offense humming with 28 assists. Jadyn Smith came up with five digs.

Stokes said that blending in with so many other talented teammates has not been an issue.

“I love the girls, and I love the coach. It’s such a good atmosphere,” Stokes said. “I played with some of the girls before so it was really easy. Everybody has been terrific.”

Kiger scouted the Golden Bears before her match and acknowledged the Potters are going to face a stiff challenge to extend their reign as 4A champs.

“I’ve had other people scout them, but this is the first time I’ve seen them play in person,” Kiger said. “They’re a great team, they’re solid across the board. We’re going to have to bring our A-game.”

¯ Oak Glen has dropped just two sets all season, one to Canfield and another to Philip Barbour. 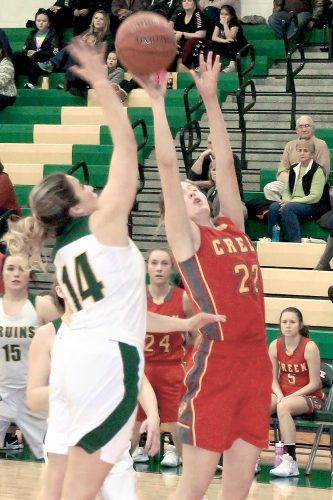 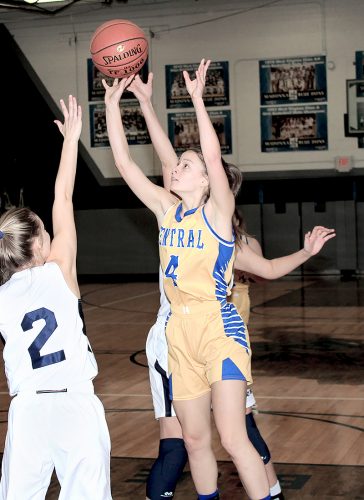