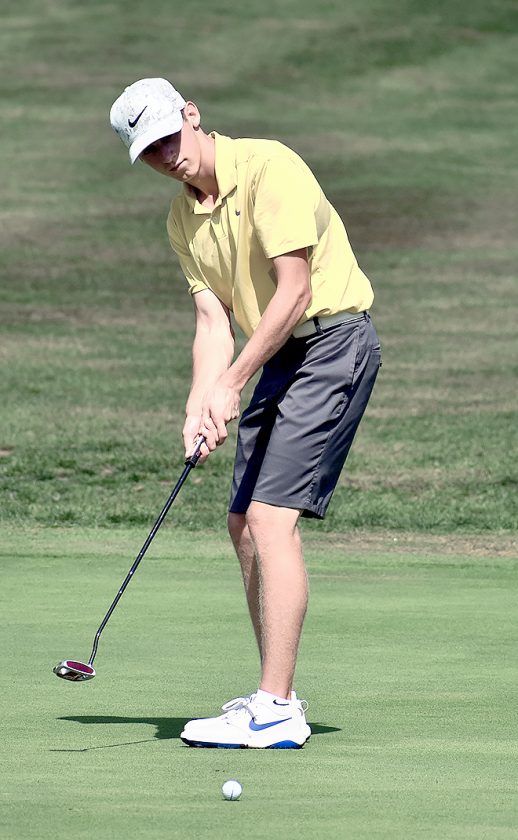 Despite the lack of experience, a young group of Maroon Knights took the Crispin Course at Oglebay Park on Tuesday and brought home a fifth- consecutive OVAC 1A/2A championship.

Central turned in a team score of 320, edging runner-up Catholic Central by six points. Toronto was a distant third with 370.

“We have three freshmen, a sophomore and a junior playing this year,” Wheeling Central coach Jim Mortakis said. “You don’t know how they are going to react in competition at that age, but we had kids come through (Tuesday). They played really well.

“That’s our first goal of the year, and now we move on to the next one.”

The Crusaders were sparked by match medalist Cole Tegano, who carded a 73 to earn his first OVAC championship. The junior caught fire when he drove the green and eagled the Par-4 16th hole, before driving the green on 17, as well, and just missing a second straight eagle, finishing with a birdie.

“After I got the eagle, my blood started pumping and I just hit my next drive to the front of the green. I haven’t done that in any of my practice rounds I’ve played here. Then, I just missed about an 8-footer for eagle on 17.”

Doerr and Constanzo are freshmen who left their mark on the tournament.

“Two freshmen made all-conference,” Mortakis said. “That’s pretty cool. They are really good kids and I enjoy spending time with them.

“I think Justin is a special kid because of how hard he works at his game and the same can be said for Ryan. They are playing golf every day and they are just trying to get better. During practice they are like sponges trying to soak it all in. They listen to everything I say and it’s all about practice for them. That’s why you see kids that have gotten better.”

Doerr impressed all day but on the back-nine, especially.

“I just went out there trying to do the best I could to help my team win,” Doerr said. “I wanted to try to hit the ball well and put it in places where I could take advantage of the course.”

Costanzo’s lone birdie shot came on the Par-4 17 hole, while Doerr added another birdie on the Par-5 9 hole.

Another reason for the quick success of the young Maroon Knights could be in part to the leadership of the only returning letterman from last year’s squad, last year’s OVAC runner-up and a two-time all-stater, Maxwell.

“J.C. has really taught me a lot,” Doerr said of his teammate. “He’s a really great player.”

After slow start and a 44 on the front nine, Maxwell turned it up a notch cutting a five-shot deficit to two within the first three holes of the back-nine, before Tegano responded with an eagle.

“J.C. struggled a little bit (Tuesday) but he played well the last seven holes of the match and that made a big difference,” Mortakis said. “He just got some new clubs so he is still adjusting to them but when he is on, he is a really good player.”

After most scores had been accounted for, Central’s Peyton Carpenter was the deciding factor. Anything under a 90 gave Central the victory and anything above — the title would have gone to the Crusaders.

Carpenter came in with an impressive 84 to help capture a fifth- straight trophy.

“I didn’t know how Peyton would play (Tuesday),” Mortakis said. “I usually pay a lot of attention to him but I came up on the third hole, he saw me and ended up chunking the ball.

“I told his mom ‘I must make him nervous’ because he was around even-par after three holes.

“He played the rest of the way and I stayed away from him. You know when you’re needed and when you’re not and he didn’t need me (Tuesday). That’s for sure.”