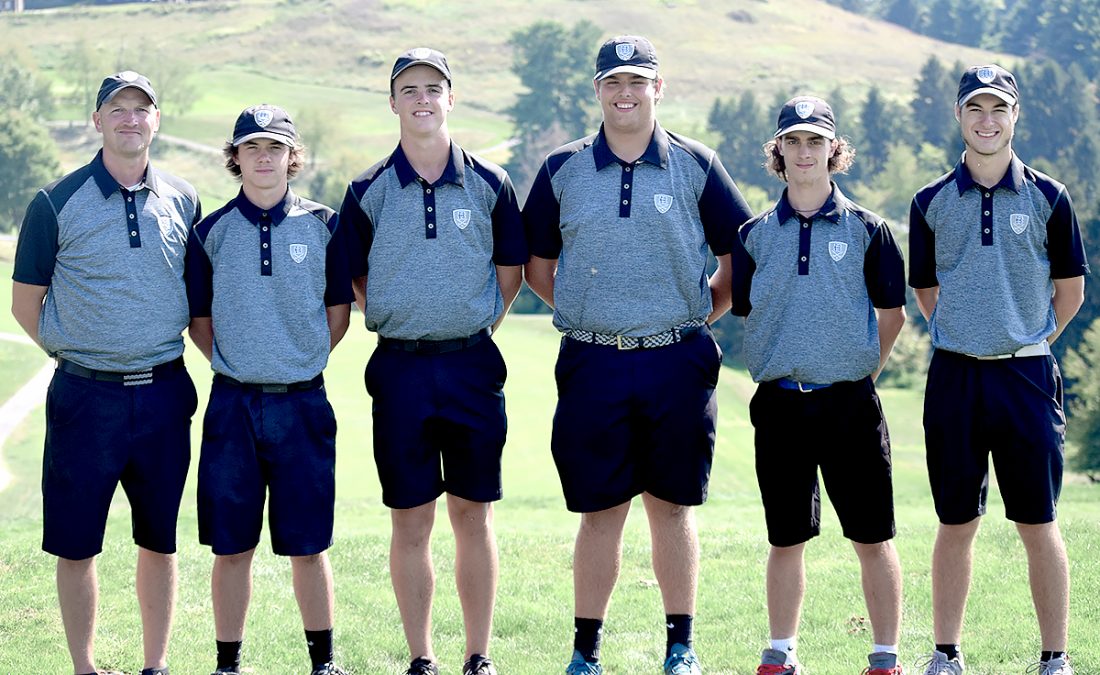 WHEELING — As the players and scorecards trickled into the clubhouse, Harrison Central head coach Todd Dunlap was tasked with posting the scores on the large scoreboards.

With each passing score, Dunlap, a 15-year veteran of the coaching ranks, started to believe more and more that it was his team’s time to finally get over the hump in the OVAC Class 4A tournament held at Oglebay Park’s challenging Jones Course at the Spiedel Golf Club Tuesday.

And once the final scores were posted, the wait was over. The Harrison Central Huskies, for the first time in the school’s history, were OVAC champions in golf.

“It’s pretty cool (to win one of these),” Dunlap said. “We had a few teams in the past that I thought had a chance, but this year, I thought we had a really good chance if we played well.”

The Huskies got an advance look at the Jones course last week in a quadrangular match and, quite simply, didn’t play well. It left a cause for concern for Dunlap.

“It was ugly last week, but I thought we’d play better (at the OVAC),” Dunlap said. “All of our guys shot their highest scores of the season that day, but (Tuesday) we were much more consistent with what we had been shooting.”

The Huskies finished with a team score of 349, which was 15 shots clear of Cambridge and 20 shots ahead of Beaver Local. The Huskies were the only team in the field that didn’t have a player sign for a score in triple digits.

“This is a credit to the kids because they’ve been part of this program since the seventh grade and really stuck it out,” Dunlap said. “The kids have consistently gotten better and better. They had a chance to really compete well here and took advantage of it.”

The Huskies were led by senior Cruz Capers, who posted an 83, which was good enough to tie for third and earn a spot on the All-OVAC squad. Sam Santille was next in line for Harrison with an 84. Jacob Hudson was third with an 87, and Nick Coffland’s 95 rounded out the scoring.

“I had a decent idea of who the two teams were that we’d have to beat and they played consistent,” Dunlap said. “Cambridge and Beaver both played well. Our consistency through the three, four and five spots has been the biggest thing for us all year.”

While the Huskies were celebrating their first team crown, Martins Ferry’s Luke Krol was also putting some ghosts of OVAC past behind him.

In last year’s OVAC, the then-Purple Rider sophomore signed for a score in triple figures. He proved that was simply an off day. Kroll battled the heat as temperatures soared into the low 90s, the wind, which was gusty at times and the overall challenge that is Jones for a solid round of 79 to win the OVAC individual title.

“(Winning this tournament) means everything to me … it’s what I’ve been working toward my entire high school career,” Krol said. “I just have to continue to keep looking at the next tournament or event on the schedule and continue to try to get better.”

Krol — like most golfers — had his fair share of ups and downs on the course. However, he remained steady in his approach. He also drove the ball well and hit several greens in regulation, giving him opportunities to score well.

Krol and Beaver Local’s Eyster, who were not playing in the same group, both posted a 40 on the front side of the course. Krol turned it on during the second nine, posting a 39, which was the low score on that side of the course by two shots.

“I feel like that back 9 is the hardest nine, so I knew I had to play it safe and smart,” Krol said. “I just tried to keep calm. I had some rough holes and there are times when you think you might be out of it, but I just kept telling myself there’s still a lot of golf to play and you never know what can happen with the next hole or shot.”

Eyster finished second overall and earned a spot on the all-OVAC squad with a round of 82.

He and Krol were joined on all-conference unit by St. Clairsville’s Will Foster, Edison’s George Ash and Capers, all of whom posted an 83 to tie for third.