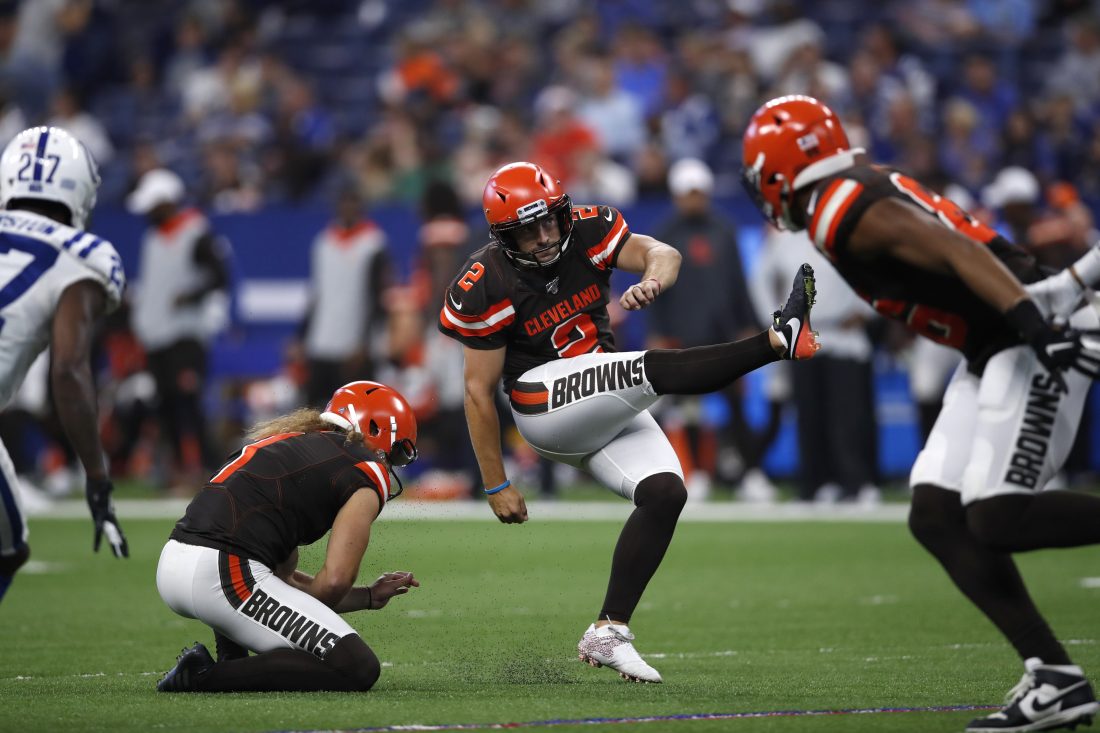 FILE - In this Aug. 17, 2019, file photo, Cleveland Browns kicker Austin Seibert (2) watches his kick against the Indianapolis Colts during an NFL preseason football game in Indianapolis. Browns coach Freddie Kitchens says there are no immediate plans to sign another kicker despite erratic performances by incumbent Greg Joseph and rookie Austin Seibert during training camp and exhibitions. (AP Photo/Jeff Haynes, File)

BEREA (AP) — Browns coach Freddie Kitchens isn’t quite ready to give his kickers the boot.

Despite erratic performances — wide right, wide left, short, off the uprights — in training camp and exhibitions by incumbent Greg Joseph and rookie Austin Seibert, Kitchens said the team has no immediate plans to sign another kicker.

That could change, though.

“We are not trying to bring in a new kicker right now,” Kitchens said following Monday’s practice. “We have two guys right here that can kick the ball a long way. We need them to get their act right. We are not looking to replace them right now. We are looking to getting these guys better and continuing to get better.

“The process of evaluation and the process of judging them has not concluded yet. When it concludes, then we will make that decision.”

But with every miss, time is becoming an issue for the Browns, who endured kicking problems early last season and played in eight games decided by four points or fewer.

Since the beginning of camp, both Joseph and Seibert have struggled with accuracy and consistency.

On Monday, Joseph went 4 of 6 (he missed from 53, 56 yards) during field-goal drills and made a 44-yarder to cap a two-minute drive by the Browns’ first-team offense.

Seibert was also 4 of 6 during the kicking session, but pushed a 40-yarder left in the two-minute drill.

The fifth-round draft pick from Oklahoma has been especially sketchy, leading to questions about whether his struggles are more mental than physical.

“He has to get it figured out,” Kitchens said. “If I make him nervous, I plan on being at the games.”

Joseph, who missed four of 29 extra-point attempts last season, botched one in the preseason opener against Washington and was off the mark on a 53-yard field-goal attempt Saturday at Indianapolis.

Seibert missed a 52-yarder against the Colts and hasn’t looked truly comfortable from the moment he arrived in May.

Both kickers have plenty of leg strength, that’s not the issue. They just haven’t been precise with their aim, and that can be scary for a team such as the Browns who have playoff aspirations.

Kitchens needs one or both of them to be confident, which in turn will allow him to put them in the game without a moment’s hesitation.

“When we send the field goal team out there, I do not want to send the field goal team out there thinking, ‘Maybe we will make it.’ I want to know that we are going to make it,” he said. “(Former Alabama Coach) Coach (Gene) Stallings used to tell me all the time when I step up into the pocket and I throw the ball, he wants to be able to close his eyes and know that it is made and that it is completed.

“That is what I want. I want to be able to send them out there, turn around and go talk to the offense and hear about the score.”

The Browns play their third preseason game on Friday at Tampa Bay, and Kitchens was asked if this could be a do-or-die week for his kickers.

“Hopefully they’ve been treating it like that,” Kitchens said. “Everybody’s fighting for a job right now.”

Kitchens is pretty clear on what he needs from Joseph and Seibert going forward.

“I want the ball to go through and not outside those yellow poles,” he said.

NOTES: DE Chad Thomas returned to practice a week after he was immobilized and carried from the field with a neck injury. … Kitchens said he’d “love” to have UFC champion and Cleveland native Stipe Miocic visit the Browns. Miocic won back his heavyweight title over the weekend by rallying to stop Daniel Cormier in the fourth round. “It seems like he really never gave up and just kept fighting,” Kitchens said. “Sometimes the best ability is reliability, availability and dependability, and I think he is a great demonstration of that.”… S Damarious Randall is sporting dyed blue hair as he pays off picking the Golden State Warriors to win the NBA Finals. They lost to Toronto. “This is my due diligence for the bet,” he said. … TE David Njoku has stitches in his head and can’t wear his helmet during individual drills. He’s been slowed the past week by a knee injury. 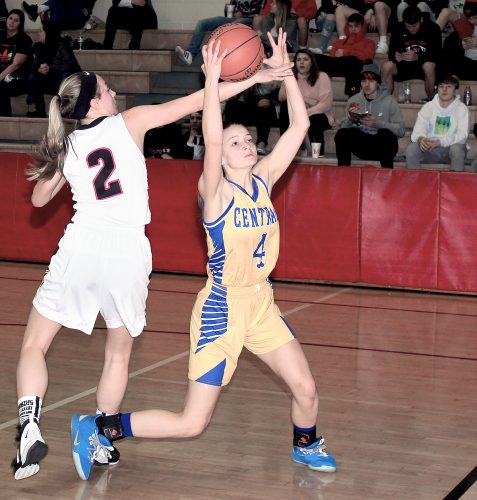