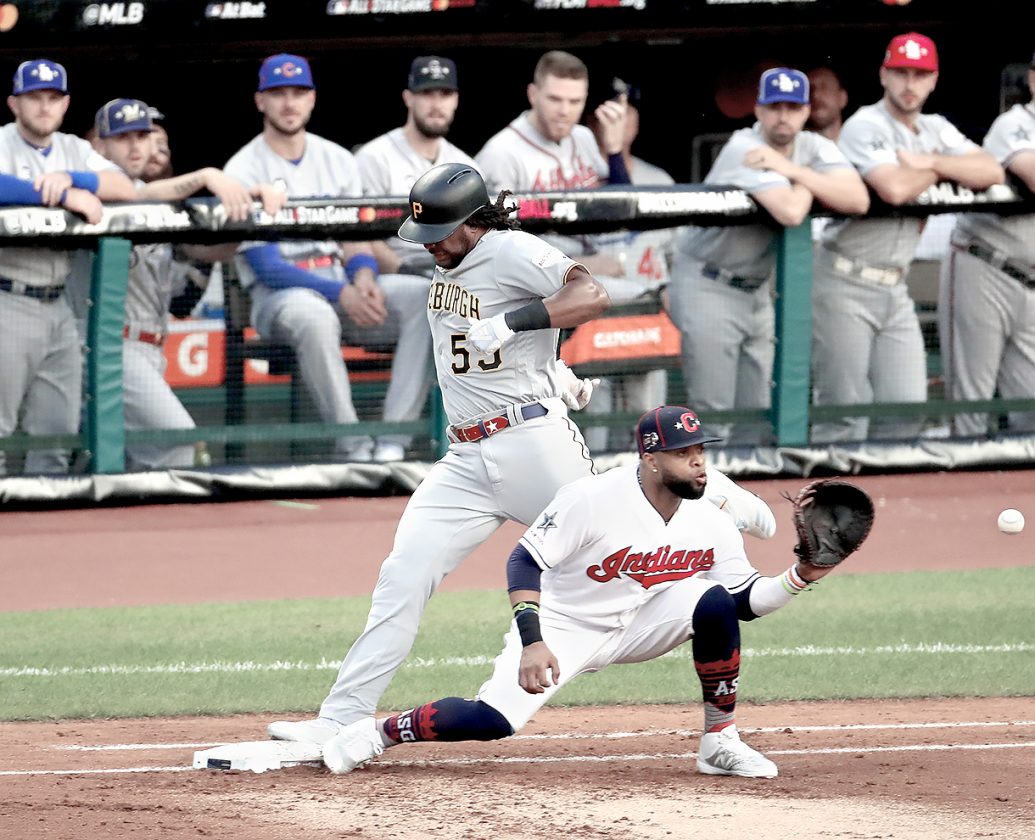 National League's Josh Bell, left, of the Pittsburgh Pirates, is safe at first for a single as American League first baseman Carlos Santana, of the Cleveland Indians, handles the throw during the second inning of the MLB baseball All-Star Game, Tuesday, July 9, 2019, in Cleveland. (AP Photo/Ron Schwane)

Carlos Carrasco stood up to cancer.

On an idyllic night for baseball, Cleveland connections shined brightest at the All-Star Game.

Even Sandy Alomar Jr., whose storybook home run the last time the game was played at Progressive Field in 1997 made him an MVP and local legend, enjoyed another moment on the star-studded stage.

And then Bieber matched him, winning MVP honors after striking out the side in the ninth as the AL staff combined for 16 strikeouts in a 4-3 win over the NL and returned pitching to prominence a night after Vladimir Guerrereo Jr., Pete Alonso and Joc Pederson knocked balls over Progressive Field’s walls with stunning ease.

“I kind of lost all feeling in my body,” Bieber said when asked for his reaction to winning.

Bieber was a late All-Star injury replacement, only added Friday to give the Indians four representatives.

The 23-year-old, who soared through Cleveland’s minor league system and won 11 games as a rookie in 2018, showed a veteran’s poise in the fifth when he fanned Chicago’s Willson Contreras, Arizona’s Ketel Marte and Atlanta’s Ronald Acuna Jr. in succession while protecting a 1-0 lead.

The crowd chanted “Let’s Go Bieber,” during his performance, and it’s an anthem that will likely be heard each time he takes the mound going forward.

“I heard everything and really soaked it all in,” Bieber said. “I can’t thank the fans enough for making that moment for me.”

While Bieber’s unexpected MVP put a perfect cap on Cleveland’s magical night, Carrasco’s appearance served as the most poignant moment.

The 32-year-old was recently diagnosed with chronic myeloid leukemia, and during Major League Baseball’s “Stand Up to Cancer” campaign, Carrasco stood in the third-base coach’s box, flanked by his teammates and Indians manager Terry Francona.

“When I saw him, it puts everything in perspective,” said Boston manager Alex Cora, who guided the AL team. “We get caught up in wins and losses and pennant races and all that stuff and rivalries, and then that happens. And there’s more than baseball in life.

“And we’re thinking and praying for him, his family and hopefully he can be back on the field sooner rather than later.”

Brantley returned for the first time as a member of the Houston Astros, who were happy to sign the outfielder as a free agent last winter after the Indians let him walk.

He was greeted with a thunderous ovation during player introductions, stopping to squeeze Francona tightly before slapping hands with the rest of the AL squad.

“I was very emotional. I was trying to hold it together,” Brantley said. “To come back in front of these fans that I played for, for 10 years, I just want to say thank you for their support, thank you for that ovation. It means so much to me. It’s going to last a lifetime.”

Brantley heard an even bigger roar in the second inning with an RBI double off Dodgers ace Clayton Kershaw for a 1-0 lead.

Alomar, a member of Cleveland’s coaching staff since 2010, caught a ceremonial first pitch from CC Sabathia, whose New York Yankees pinstripes will never completely cover his love for the Indians. He began his career in Cleveland, and it was only fitting the big left-hander got to say goodbye in his final season.

Cora sent Sabathia to the mound in the ninth inning to talk to Yankees closer Aroldis Chapman before getting another standing ovation.

“He’s one of the best pitchers in the big leagues for the last, what, 15 years,” Cora said. “The guy has won more than 250 games, 3,000 strikeouts. Everything started here in Cleveland. We all know he’s going to retire, so we wanted to let everybody know who he is and I think it was a nice tribute.”

And Cleveland’s crowd also had its say, booing Cubs All-Stars Javier B’ez and Kris Bryant, who crashed their World Series party in 1997.

On this night, Cleveland celebrated its past, present and future.

Extending protective netting down foul lines is a ballpark-to-ballpark decision because of differing configurations, according to baseball Commissioner Rob Manfred.

Following a series of foul balls that injured fans, Major League Baseball mandated ahead of the 2018 season that netting extend to the far end of each dugout.

Still, several fans have been hurt by foul balls this season.

“We recognized early in this process that it was very difficult to set an individual rule, one rule that applied to 30 different ballparks given their structural differences, and instead we have opted to work with the individual clubs over a period of time to extend netting,” Manfred said before Tuesday’s All-Star Game.

“We’ve made extensive progress on that and I believe that that progress will continue, and I think one of the reasons that we have had progress is that we have not put clubs in an impossible position by adopting a one size fits all rule.”

Manfred said changes during the midst of a season are hard to put in place.

“I don’t think it’s unreasonable to think that clubs are going to take a period of time figure out what they can and can’t do structurally before they announce what their plans are going to be,” he said. “One injury is too many, but the fact of the matter is that we know because of the number of balls that hit into those nets, we had less incidents than we used to have. We are better off than we were, and I do believe we will continue to make progress on it.”