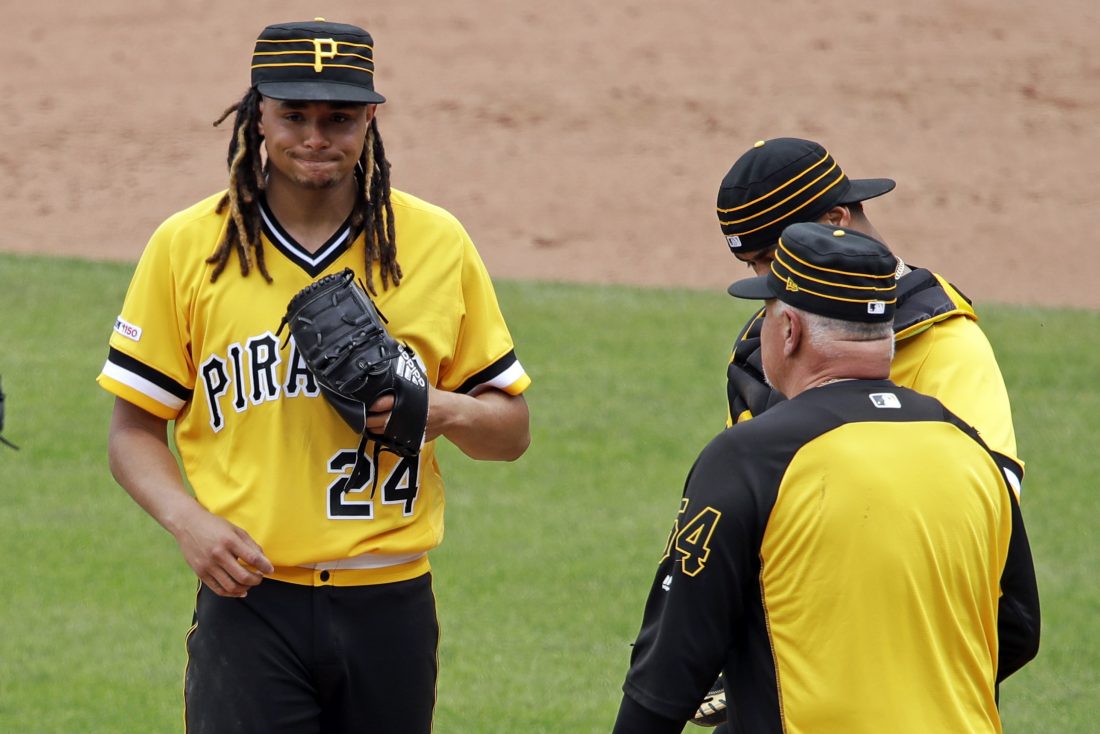 Pittsburgh Pirates starting pitcher Chris Archer, left, gets a visit from pitching coach Ray Searage in the fifth inning of a baseball game against the Los Angeles Dodgers in Pittsburgh, Sunday, May 26, 2019. (AP Photo/Gene J. Puskar)

Not that the Pirates were putting up much of a fight.

Turner had a perfect day at the plate, bouncing back nicely after taking a day to deal with discomfort in his left shin.

“He just does so many things to help us win the ballgame,” Roberts said. “I thought he was recharged. His legs were under him today.”

Matt Beaty had four RBIs and Corey Seager drove in two for the Dodgers, who got five innings of three-run ball from Kenta Maeda (6-2) in his return from the injured list. Los Angeles has won nine of 11.

“Way too many free passes,” Archer said. “Playing with fire the whole game and finally it all caught up to me in the fifth inning.”

Max Muncy led off the fifth with a 12-pitch walk.

“It was just, go to work,” Muncy said. “At that point, you just try to grind out the at-bat and then hopefully force something to happen there. I didn’t realize it was 12 pitches, but in the moment, you just kind of focus on trying to get the job done.”

The Dodgers scored three runs in the inning to end Archer’s day.

“The at-bat that Max put on completely flipped the game,” Roberts said. “It stressed (Archer), and you could see he was frustrated. Getting ahead in the count, spoiling pitches. It was four, five, six pitches he spoiled with two strikes. We broke open right there.”

Los Angeles poured it on against Montana DuRapau and Dovydas Neverauskas in the sixth. Two batters after Pederson’s leadoff homer, Turner singled and went to third on Cody Bellinger’s double, then scored on Adam Frazier’s error at second base. DuRapau walked Seager, then plunked KikÈ Hernandez with a 3-2 pitch to put LA ahead 7-3.

Neverauskas relieved and hit Austin Barnes with a bases-loaded pitch while giving up three more runs.

Barnes was injured running the bases and left the game with left groin soreness.

Bryan Reynolds had a two-run homer for Pittsburgh in the second inning, the rookie’s fifth. Colin Moran added three hits.

Los Angeles tallied 12 hits and outscored Pittsburgh 28-11 during the series to improve to 6-0 against the Pirates this season.

Top pitching prospect Mitch Keller will make his major league debut for the Pittsburgh Pirates in a doubleheader Monday against the Cincinnati Reds.

The 23-year-old Keller is being called upon to help a depleted rotation that has struggled without injured Jameson Taillon and Trevor Williams. He’ll start the nightcap after Nick Kingham pitches the opener.

The Pirates have been reluctant to rush Keller to the big leagues. He struggled in spring training but regained some confidence in Triple-A, where he’s 5-0 with 47 strikeouts in his last seven starts after adding a slider/cutter to his pitch arsenal.

“In a perfect world, we would’ve given him some more time,” Pirates general manager Neal Huntington said. “We’re not in a perfect world. We feel like he’s ready to come up here and compete.”

Dodgers: Return to Los Angeles for a four-game series against the Mets starting with an intriguing matchup between Clayton Kershaw (4-0, 3.33) and Jacob deGrom (3-5, 3.72).