Madonna athletes place in Class A 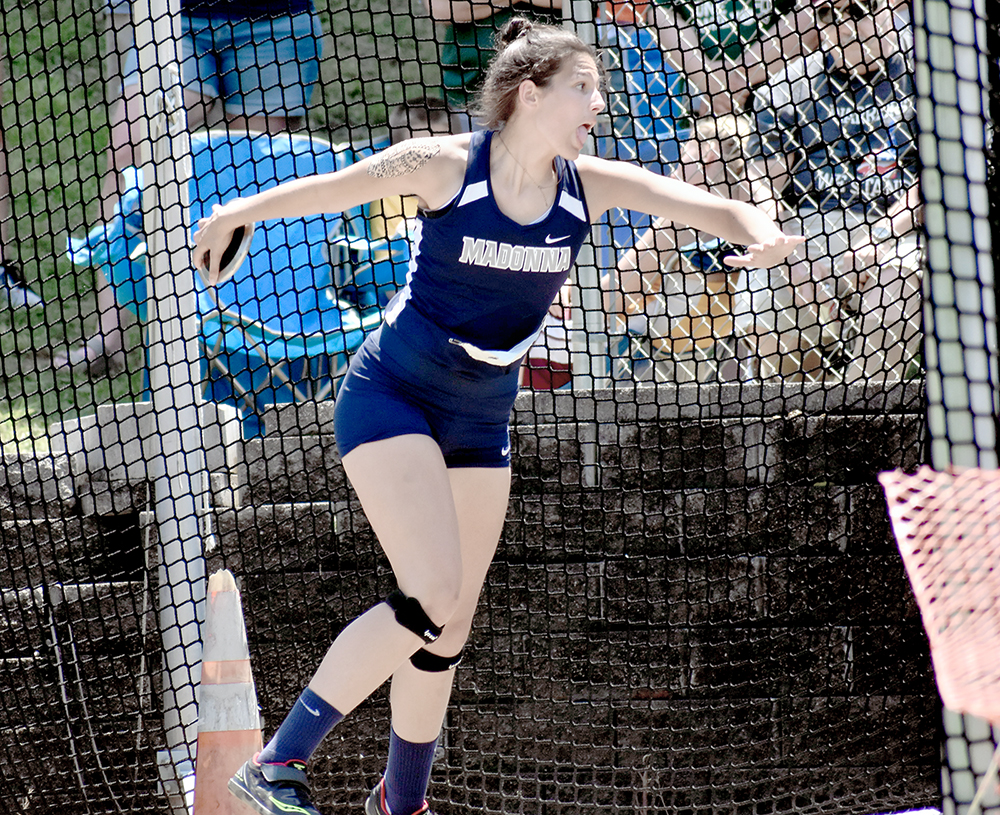 CHARLESTON — Magnolia boys coach Travis Emch knew going into the weekend, the target was on their backs. After all, his Blue Eagles’ squad was the defending state champion in Class A. Magnolia, put in another impressive performance on the biggest stage as a trio of athletes won individual state titles as it claimed state runner-up in Class A.

Jakob Barrows repeated as state champion in the shot put while Pat Mirandy won the 400, Spencer Shepard claimed the 800 for the Blue Eagles.

On the girls side, Mady Winters had a nice day as she took home a pair of state titles in the shot put and the discus.

Doddridge County claimed the boys title with a total of 84.33 points.

“We came down and were projected to score in the 60’s and we scored 82,” Emch said. “Last year we scored 80, this year we scored 82, so we scored more points. We just got out performed by Doddridge in a couple of events. I’m very proud of how we did. We just came up a little short.”

Winters was the lone local athlete in Class A to walk away with multiple gold medals. In the shot put, the sophomore threw 38-feet-04.50 while tossing 124-05 in the discus.

“It’s even more exciting. Its crazy. I didn’t expect it,” Winters said about winning two state titles. “But I’ll take it.”

Mirandy took home the first gold medal of the day for the Blue Eagles as he clocked in at 50.45 in the 400.

Like the whole team, Barrows knew he had a target on his back as he went into the day as the reigning Class A champion in shot put. He made sure no one would take that title from him. With a haul of 52-05.00, the junior repeated as state champion.

“I don’t know if it feels as good as the one last year, but in a way it does,” Barrows said. “I had to work two times as hard. Repeating is a lot harder to do because everybody is coming for you.”

“When I started track in seventh grade, this is what I wanted,” Shepard said. “It makes me feel really good that I finally did it.”

Tyler Consolidated’s Spencer Corley also claimed a state title. In the high jump, the sophomore cleared the bar at 6-4.

“It’s a surreal feeling,” Corley said. “I’ve been working all season for this moment and I’m glad all the hard work I did paid off.”

Stillwagoner and Beisel were also on the 4×100 team with Sebastian Stickler and Kyle Thomas taking second in a time of 44.87.

In the 4×400, the Blue Eagles captured another second as Stillwagoner, Mirandy, Shepard and Logan Beegle clocked in at 3:35.84.

“I couldn’t do it without my assistant coach Trey Meeks,” Emch said. “He’s done a heckuva job. He’s helped every one of these kids. They believe what he’s doing. The kids just believe in what we’re doing.

“We’re just preaching to do the little things right and just taking care of business, just trusting one another and doing our best to see what we can do.”

The Wheeling Central boys’ team got fourth in the 4×200. Curtis McGhee, Anthony Robbins, Payton Marling and Bray Price clocked in at 1:33.90.

McDonald, Yeater and Stackpole along with Maggi Still secured a third place in the 4×100 (51.86).