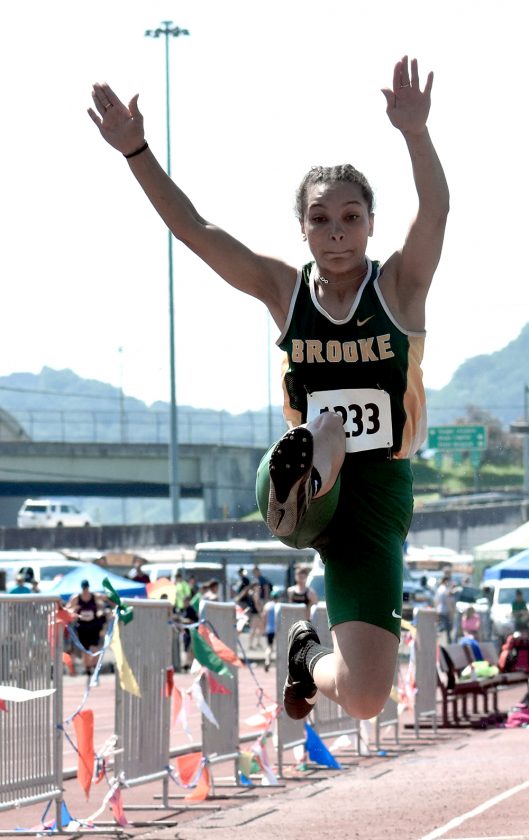 CHARLESTON — The Wheeling Park boys and girls track teams have been forces all year long. The memorable season came to a fitting end Saturday during the West Virginia High School state track meet at Laidley Field.

Throughout the entire meet, Wheeling Park was in contention for a state championship, and on both sides, it all came down to the final event.

In the end, the Wheeling Park boys and girls track team both claimed second to cap a memorable season.

Spring Mills secured a victory in the 4×400 to claim the overall boys’ team title with 71 points and edge the Patriots by three.

It was more of the same for the girls. Ripley won the 4×400 to capture the overall team title with 82 points while Wheeling Park ended with 80.

“We came down here and score 150 points or whatever,” Wheeling Park coach Bryan Arbes said. “Whatever it was, it’s absolutely awesome. We came down and battled.

There were two winning relay teams for the Patriots as the girls’ 4×200 claimed the top spot on the podium as Marlee Porter, Alex Knight, Amari Poole and Abby Snedeker clocked in with a time of 1:44.93.

On the boys side, the 4×100 tandem of Justin LeVelle, Sincere Sinclair, Shaheed Jackson Mayfield and Torrence Walker clocked in at 43.11.

In the girls’ 4×100, a school record fell as Aaliyah Speights, Aubrey Wiethe, Poole and Snedeker placed second with a blazing time of 48.96. While there were many strong performances from the Wheeling Park team, the quickest relay event was the one that caught Arbes’ eye.

Other placers for the boys include Christian Sorge as he placed second in the pole vault (14-00). LeVelle, Walker, Sinclair and Jackson Mayfield captured silver in the 4×200 (1:30.65).

“We lose some seniors on the boys’ side and on the girls’ side we lose Brady,” Arbes said. “The culture is there. All these kids even stick around and cheer each other on. Wheeling Park track is a main sport now. That was my main goal.”

Brooke’s Yazmin Island secured a second place finish in the long jump (16-08). After winning the event last year as a sophomore, the junior had another strong outing claiming the silver.

Zervos was also on the sixth place 4×400 team that consisted of Allie Danna, Claudia Callahan and Emily Harr (4:14.16).