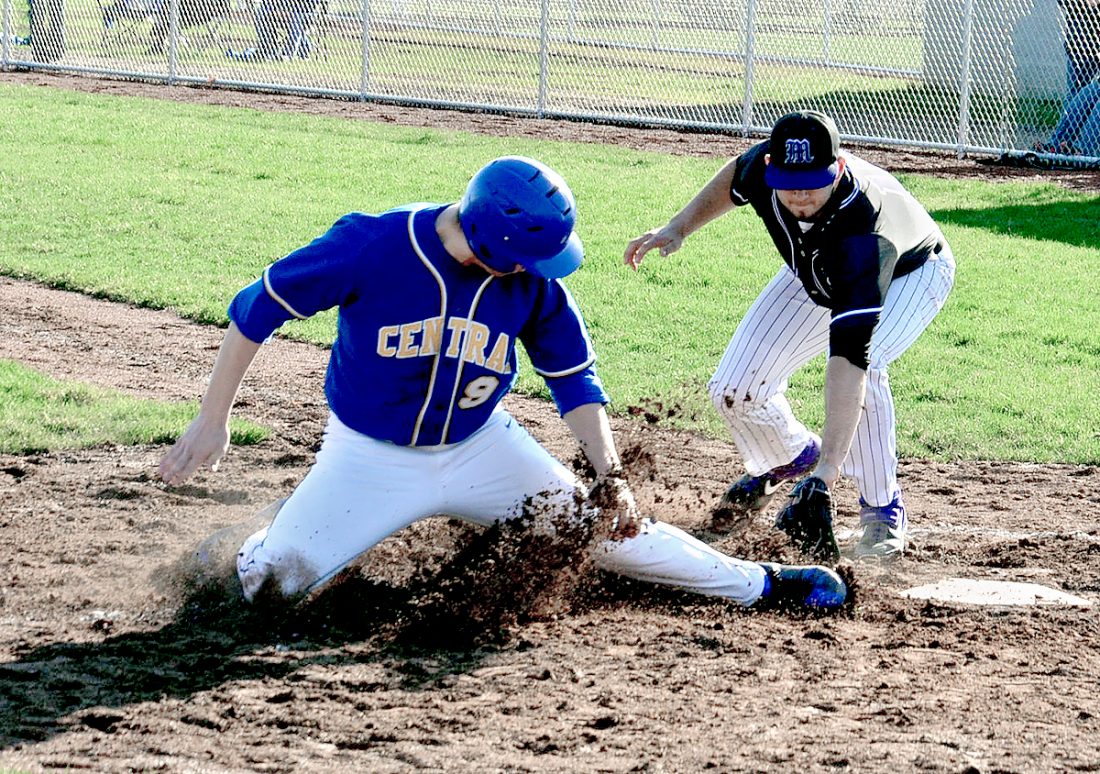 MARTINS FERRY — The first game on Martins Ferry’s refurbished baseball field high atop the Purple City will not be one to remember, except if one is a Steubenville Catholic Central fan.

Matt Bell limited the Purple Riders (6-5) to three harmless singles and struck out eight over six innings, as the Crusaders (7-5) claimed an 11-0 decision in a game that had Ohio Valley Athletic Conference baseball playoff implications for the squads. Both entered sitting in fourth-place in their respective classes (IV and II), with today’s games serving as the cutoff.

“He’s done that for us all year long. We expect that from him,” Catholic Central head coach Don Young said of his four-year letterman who has signed to play at Walsh University. “We played a little better … a complete game … today.”

Indeed the Crusaders did. They bashed out 10 hits, took advantage of some wild pitching on behalf of the Purple Riders and capitalized on every mistake the hosts made.

“We had a rough week last week. We lost three close games. We played well at times, but we made a lot of mistakes,” Young said. “We started this week better. We needed this one. Our goal every day is to play solid baseball. We did that today.”

In the other dugout, Martins Ferry’s Anthony Reasbeck was at a loss for words to describe his team’s lack of hitting.

Bell set down the first eight Purple Riders, before Chase Ward blooped a single down the right-field line that Ryan Gorman just missed making a sliding catch of. Mason Goddard followed with an infield single, but Bell got the next batter swinging to end the threat.

The right-hander retired the side in order in four of his six innings of work. He yielded a one-out single to Goddard in the sixth, and an error left runners on first and second. Following the second out, Drake Dobson walked to load the bases, but Bell got the next batter swinging for his final strikeout.

Nick Kissinger surrendered a two-out single in the seventh but struck out the other three batters.

Center fielder Anthony LeFever turned in a defensive gem when he made a diving catch of a sinking liner off the bat of Chase Goff leading off the fifth.

The same two teams battle again today at Vaccaro Field in Steubenville. The first pitch is set for 5 p.m.