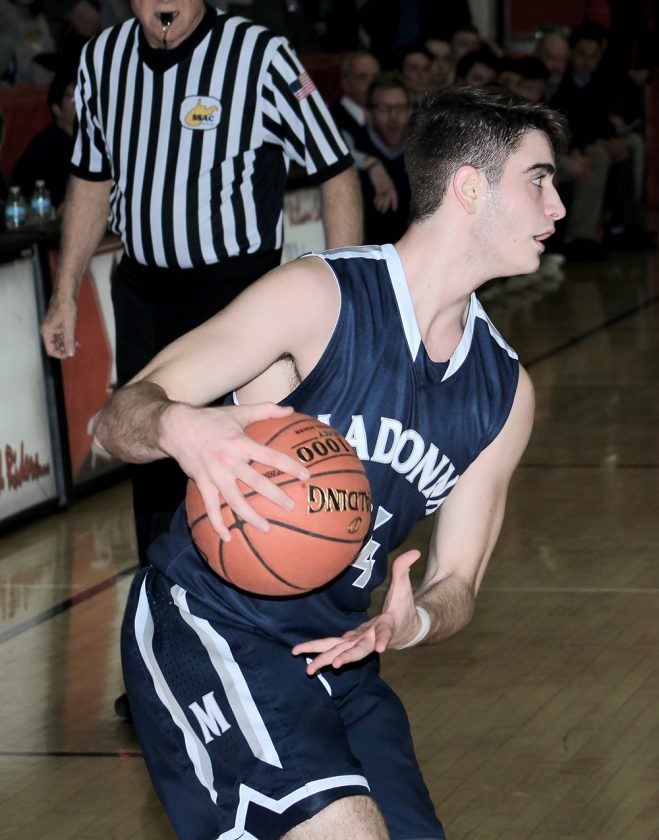 TIME TO SHINE — Madonna’s Lucky Pulice and the Blue Dons look to have a strong Class A tournament run. (Joe Catullo)

WEIRTON — The Madonna girls basketball team has been voted the top seed in Region 1, Section 1, but the boys are still awaiting seeding, where they could wind up either third or fourth depending upon how the 10 coaches in the region voted. The voting was this past weekend and will be announced today.

Meanwhile, the Blue Don girls will host of the opening game of the section tournament against Valley today at 7 p.m. because the Lumberjacks beat Hundred Saturday, 57-19, in the play-in game. The Dons beat Valley twice during the regular season.

The game was moved from Brooke High School because of the strike called by the state’s teachers.

“We are the No. 1 seed in the section for the first time in many years,” said Blue Don second-year coach Rodney Boniti, whose team finished the regular season and OVAC tournament with a record of 16-5.

The Blue Don boys still have a regular season game coming up Wednesday against state-ranked Clarksburg Notre Dame (18-3) inside the Dube Dome.

“I think we’ve played the best competition out there,” said Chris Blair about his team, which has shown improvement over the past couple of weeks. “We’ve played one of the toughest schedules around and when you’re playing against that type of competition you’re going to get better for it. We don’t have many wins to show for that tough schedule but I do believe in my heart that we’re going into the tournament playing the best basketball we’ve played all year. Even in the games we lost recently, they were close. We’ve had the lead late in the fourth and we’re getting closer to figuring out how to win these games. We’re certainly getting better and I think we’re hitting our stride.

“Any coach would have a goal of having their team play the best they can play at this time of the year going into tournament season. That’s promising for us and we’re looking forward to seeing how that plays out.”

The Blue Don girls have gained a little bit of swagger this season by virtue of playing a schedule loaded with some higher class teams and several state-ranked teams. Boniti’s crew has won most of those games.

Boniti has used what he terms as his six-girl starting rotation. Senior Andrea Alimario, who has emerged as a team leader for the Dons, is a third-year starter at forward. She averages about 16 points a game. Junior Kennedy Martin plays the post position and cleans the glass at the rate of about 14 rebounds per game, Boniti’s daughter Rachel Boniti, a senior, plays point guard and sophomore Jazzy Melnyk is the other forward. Coach Boniti said depending upon certain factors, he will start either Gia Riccadonna or Gabby Staffileno. Both are seniors.

Martin and Alimario are the leading rebounders. Riccadonna is a deadly outside shooter and Melnyk and Staffileno are tall enough and athletic enough to be successful driving to the basket. Coach Boniti also uses sophomore point guard Michaela Battista off the bench along with freshmen Anna Backel and Vanessa Alatis.

“We knew going in that we had a pretty good team,” said Boniti. “One of the unknowns was how strong our bench would be, but it has turned out that the bench as been one of the key factors for us. After the rugged schedule we have played the girls now know that they can play with anybody. I think this has given them a little swagger.

“I don’t have the exact scoring stats but Boniti probably averages about 13 points a game and Secrist is averaging about 12 points. Dietrich gets about 10 a game and Pulice nine,” said Blair.

“We played some bigger schools early like East Liverpool and Beaver Local that, I think, made us look like we weren’t good. I believe we’re better than our record appears,” Blair said. “Sometimes when you take a couple of tough losses like that you lose some confidence, but we’ve gotten a lot of our confidence back as we’ve played schools the second half of the season that are more our size.

“Decision-making is something that has gotten better. I think our kids are understanding now that it takes good decision-making all four quarters to get a victory. Our point guards, Dietrich and (Evan) Boniti, are making better decisions and have gotten more confidence on the offensive end and more aggressive on the defensive end. Our bigs are playing stronger down low and finishing more — players like Secrist, Mazure, Ridgeway and Mitchell. Pulice has come out of his shell and had a couple of big games for us with more consistency.