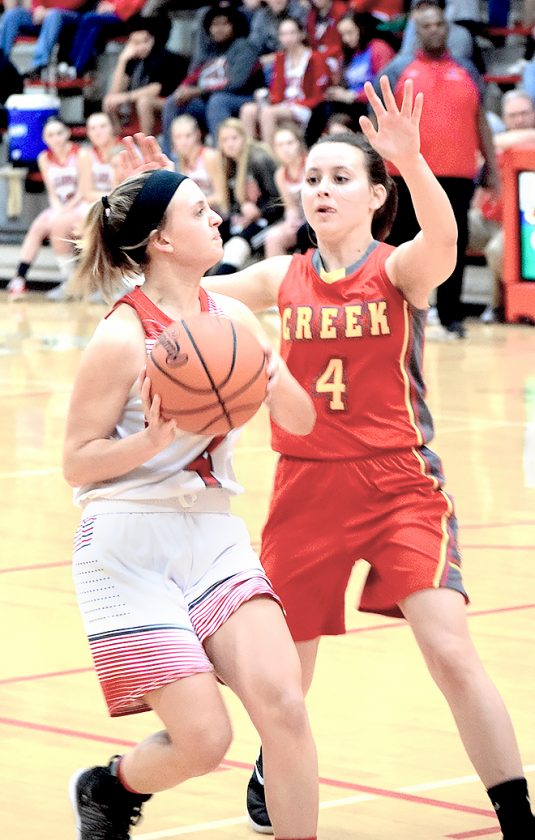 ST. CLAIRSVILLE — Sometimes it’s good to have a short memory. The St. Clairsville girls basketball team showed it has one Monday evening during senior night on John Jenkins Court.

Just a little more than 48 hours removed from dropping a gut-wrenching, one-point decision to Beaver Local in the OVAC Class 4A championship game, the Red Devils were back at it against reeling Indian Creek.

St. Clairsville (14-7) showed no ill effects from its loss on Saturday and avenged one of its most lopsided losses of the season with a hard-earned 40-33 victory against the Redskins, who have now lost five in a row after a 15-0 start.

“I am really proud of how these kids bounced back because it would have been easy for them to come out and just continue to hang their heads,” St. Clairsville head coach Stacey Agnew said. “These girls gave a strong will to win, and I think they showed that.”

The Redskins, meanwhile, are left once again searching for answers. Since their red-hot start to the season, which saw them earn a spot in the state’s Division II rankings, they’ve fallen to Bellaire, Wheeling Park (twice), John Marshall and now the Red Devils.

“I felt pretty good coming into this game because we had a pretty good week of practice, but we weren’t ready to play tonight, and that falls on me,” Creek head coach Steve Eft said. “We need a win badly. We’ve played really good competition and lost a couple of close ones, too. But, we have to find a way to win games like that and get back to the way we were playing early in the season.”

Agnew actually admitted he started to feel a case of deja vu coming on as the latest game unfolded. He once again watched his team take control. This time, the Red Devils went up by as many as 13 in the second half.

However, the Redskins got going. They closed the third with five-straight points and began the fourth on a 10-2 spurt to knot the game at 30 with 3:40 to play.

Unlike in the OVAC title game when the Red Devils simply couldn’t stop the bleeding, they made the plays this time around.

“We finally found a way and got big buckets when we really needed them,” Agnew said.

Junior Keri Klinkoski put the Devils back on top with a jumper. Macy Malin came up big in the fourth at the foul line, converting 6 of 9 freebies. Freshman Shae Brookover also cashed in two at the line during a stretch in which the Devils pushed their lead back to six.

Indian Creek, which converted just 6 of 20 from the line for the game, got as close as four, but Malin continued to knock home foul shots.

“I liked the fight we showed late in the third and in the fourth quarters, but you can’t wait until then to get going,” Eft said. “We gave them too much of a lead.”

In the first half, the Red Devils received a lift from senior Maria Vincenzo, who scored 12 of her game-high 15. Malin closed with 14 in top support, while senior Rileigh Simpson added six.

Both teams were without a starter. Katie Strama missed again for St. Clairsville with a knee injury. Creek sophomore point guard Kiley Kiger is nursing an ankle problem, which Eft doesn’t believe will keep her out of the lineup long.

FORT WORTH, Texas — Scott Dixon, Alexander Rossi and the rest of the IndyCar drivers were in sunny Florida around ...

WHEELING — The Wheeling Nailers, ECHL affiliate of the Pittsburgh Penguins, have announced their 2020 protected ...