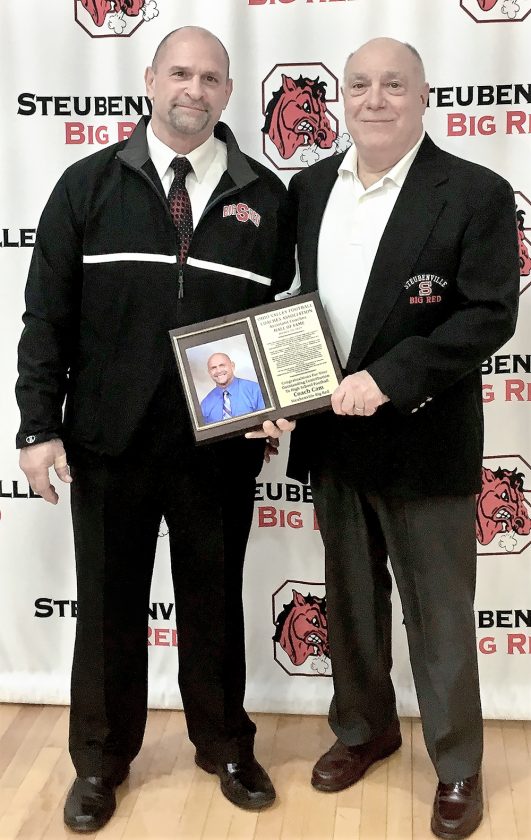 STEUBENVILLE — Rick Camilletti has held many titles during his career in education. Currently the assistant principal at Big Red, he’s also been a teacher, an assistant coach and a head coach.

Recently, he added another one to his resume — hall of famer. In late January, Camilletti, known as Coach Cam, was inducted in the Ohio Valley Football Coaches Association’s Assistant Coaches Hall of Fame.

Entering with him were Frank Spence of Catholic Central, Bill Ewusiak of Brooke, Blair Closser of Buckeye Local, Tim Tisher of River and Jerry Cappiccie of Wheeling Park. Other members of the hall are Bill Bruney who coached at Big Red and Martins Ferry, Paul Filtz of Big Red, Bob Radakovich of Big Red, C.L. Strahl of Monroe Central, Chuck Briggs of Monroe Central and David Schuerman of Monroe Central.

To be eligible for induction, a candidate must have served as an assistant football coach, the head coach of another sport and been out of coaching for at least five years.

“I certainly want to thank the coaches association, this is a great honor,” Camilletti said. “I feel humbled because of some of the other guys who are in the hall of fame. Guys like Bill Bruney, Paul Filtz, Bill Ewusiak and Bob Radakovich — I did have some association with most of them. Not only are were these guys great coaches but they also are great people.”

Camilletti’s gridiron success began during his playing days at Brooke. He was a member of Bruin teams that posted a record of 22-3-1. He is a member of the Brooke Hall of Fame. Upon graduation, he went on to be a four-year starter at middle guard for West Liberty.

His coaching career began at Buckeye Local. During his stay there, the Panthers went 8-2 and won an OVAC championship. He also helped coach the Ohio team to victory in the conference all-star game.

Coach Cam then spent the next 27 years as Big Red’s defensive line coach. Big Red amassed a record of 267-53 during those seasons and earned four trips to the state finals, winning Ohio titles in 2005 and 2006.

He served as Big Red’s head wrestling coach for five seasons and has numerous wrestlers either claim state championships or place at the Ohio tournament. He is a past OVAC wrestling coach of the year. He also assisted with the school’s track program.

For the past six years, he has been in his current role as assistant principal.

“When you receive something like this, you think back and ask why did I have success?” Camilletti said. “In my case it was because we had great players — players who bought into what we are doing.

“I want to thank the Steubenville City Schools for giving me a chance. I also have to thank the guys who either coached me or I coached with because you learn something from all of them. I truly appreciate this honor.”

“He coached that defensive line for a long time and our defensive line made everything happen for our defense,” Saccoccia said. “It even helped out our offense. It’s a great honor for him and he earned it.

“Coach Cam did a great job for us, not only in football but also in wrestling and track. We were very happy and fortunate to have him on our staff.”

Camilletti is the fourth member of Saccoccia’s staff to enter the hall.

“I’m really proud of all of them,” he said. “I’ve been fortunate to have some great, great assistants over the years.

“In Cam’s case, his contributions to our program even extended to Danny Filtz taking over his position. It was like a relay — there was a smooth handoff from Cam to Danny and Cam had a lot to do with that.”