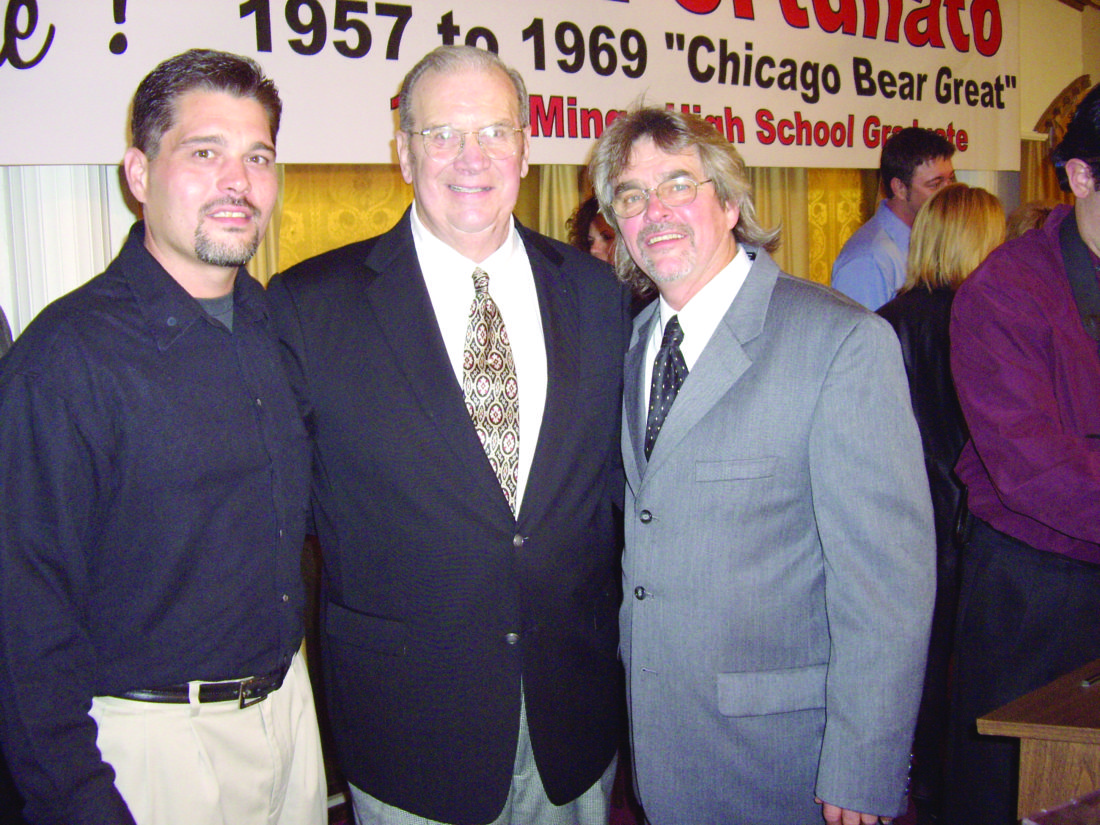 Sometimes people leave the Ohio Valley and do great things, but in such instances their presence and impact on the area is felt long after they are gone. Such is the case with Joe Fortunato and his native Mingo Junction.

Throughout the city are signs and markers signifying the small Ohio Valley town as the original home of the Chicago Bears great, and many in the area have fond memories of the former NFL champion who passed away back in November in his home in Nantchez, Mississippi, at the age of 87.

One of those who remembers Fortunato is 86-year-old Baci Carpico of George’s Run, a friend of Fortunato’s since the two were both students at the old Mingo High School in the mid to late 1940s.

“I ran track,” Carpico said. “I was never that big, so I didn’t play football. I ran the mile and he played football. I knew him all four years pretty much.”

“What Joe accomplished was unbelievable,” Carpico said. “I remember one time they played the Cleveland Browns and we went up there. Joe tackled Jim Brown, and that was really something.”

Before his time in the NFL, Fortunato was a standout for Mississippi State from 1949-1952. He was All-SEC, All-South and All-American defense in 1951. He transferred to the Bulldogs from the Virginia Military Institute after one semester when coach Slick Morton made the move from VMI to Starkville.

“He went to VMI first, and the coach there left and talked him into going down there with him,” Carpico said. “He had four outstanding years at Mississippi State. When he was playing there at Mississippi State, three or four of us would go down to some of the games. We couldn’t make it to all of the games, but we went to as many as we could to go see him.

“There was a game Mississippi State played Tennessee and beat them 7-0, and we went down on the field; at that time we were still allowed to that. Here comes coach (Robert) Neyland across the field and says to Joe, ‘I’m glad this is the last year we have got to deal with you.’ That was an awesome moment.”

After the success with the Bulldogs, he was selected by the Bears in the seventh round (80th overall) in the 1952 NFL Draft, but served two years in the U.S. Army before continuing his football career.

Before all of that, however, the success began in Mingo Junction. A letter winner in three sports — football, basketball and track — with the Mingo Indians, he became an All-Eastern Ohio team member and was the MVP of the Ohio-West Virginia All-Star game before graduating in 1948.

As Fortunato was returning from Korea and beginning his NFL career in 1955, he served as the best man in Carpico’s wedding.

“Oh yeah, there are some good memories there,” Carpico said. “In those days things were not like they are today. It was a small community.”

Carpico’s lasting impression of his old friend is someone who was successful in anything they tried.

“He got into real estate and the oil business,” he said. “He was very successful in everything. He was a very well-liked.”

He also remembers him as someone who was always giving back.

“He was always very generous with the community,” Carpico said. “After he moved to Nantchez, Mississppi, and started his oil business, he created a golf outing for the kids and scholarships. He was just a great individual. He was very generous around where he lived.”

While the two did not get to see one another as much as perhaps Carpico would have liked later in life, they always stayed in touch.

“I didn’t get to see him as often all that much … but we communicated a lot,” he said. “He would always ask me, ‘You need anything?’ I would tell him no. He was very generous. Even when he was sick within the last six months or so, he would ask if I needed anything. That’s just the kind of guy he was.”

He also remembers someone who did not forget where they came from.

“Joe loved the community without a doubt,” Jim Freiling said. “I think he did a lot to support the community anonymously. A lot of people might not know about Joe Fortunato’s ties to the community after he got on his way into professional football and lived in Mississippi, but I believe he did a lot of good things.”

Freiling was involved in bringing Fortunato back to Mingo Junction to be honored with a banquet in 2007.

“The night we had the dinner he walked in and was surprised,” he said. “He thought it was just going to be a little dinner. He walked in to see at least 500 people dressed up. You could see him welling up. He signed autographs all night, and people lined up to talk to him again.

“It was just a great evening. He just really enjoyed it and appreciated everything that Mingo did for him that night.”

Fortunato was presented with the key to the city, and Nov.4 was declared “Joe Fortunato Day” in Mingo Junction.

“I give Jim Freiling and his wife Kathy a lot of credit,” Carpico said. “If it weren’t for them and the Mingo Business Association, this would never have happened. It was a great thing they did, recognizing an outstanding individual from Mingo Junction.”

For Freiling, it was a long-time goal achieved.

“We pretended to be Joe Fortunato playing football in the backyard as kids,” he said. “When we started to get involved with the village we had a bucket list. We knew we wanted to honor Joe. When we started it went from, ‘Did you sell any tickets?’ to, ‘I don’t know if we can sell any more tickets.’ Mr. Fortunato deserved it, and I will never forget that night.

“He was just a really great guy. If you’re looking for a role model, that guy is it.”

Freiling made a trip to visit Fortunato in Mississippi in 2012.

“I actually went down and visited him one time at his home in Nantchez, Mississippi,” he said. “He took us around town and showed us around. What got me about his office, on his desk he had a picture of him and his friends from Mingo. He was very proud of the key to Mingo. He said to me, ‘look where I have that key, I love that key.’ It was hanging right above his fireplace.”

His impression on the community extended to high school sports in the Mingo area to the Indian Creek community. It started with helmet stickers of Fortunato’s jersey number 31, and grew to player of the week and player of the year awards for the football team.

You don’t have to look to hard to be reminded of Fortunato in and around Mingo Junction. Today there are signs at both the north and south entrances of Mingo Junction and field by the middle school where the Redksins play baseball, softball and soccer is the Joe Fortunato Student Activity Field. There are also scholarships for students at both Mississippi State and Indian Creek named after Fortunato.

Among Fortunato’s post career honors are an induction into the OVAC Hall of Fame and Mississippi State Ring of Honor, but it is one honor Fortunato has not yet received that Freiling hopes to see him get one day.

“If you look at all the players of his time and look at Joe, it’s hard to see why he is not in the Pro Football Hall of Fame,” he said. “He’s more than deserving. I hope one day they make it right and put him in there. It’s shame it couldn’t happen while he was alive to see it.

“His career alone speaks for itself, but he is also a war hero who served his country and did a lot for people after football.”