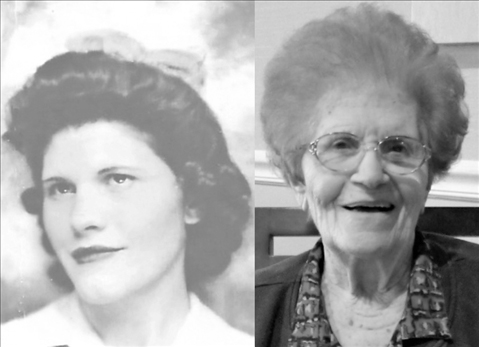 Lillie Susan Fiorelli Ragnoli — The montage that became Lillie’s life began on October 5, 1919 with her birth in a farm house in Jefferson Township, PA, and came to its natural conclusion in Weirton, WV on Tuesday, May 19, 2020.

Lillie grew up on a Smith Township farm, worked building LST’s for Dravo Corporation on Neville Island during WWII, moved to Detroit, Michigan upon getting married and worked at Dodge Main as an assembly line employee for 23 years. While touring Italy, she and Mario visited Ragnoli family several times during their marriage. The Rangolis’ owned a modest retirement residence in Bradenton, FL where Lillie moved after Mario’s passing and where she excelled as a Bocce player. Her late return to Burgettstown was unexpected but welcome. She enjoyed her flower garden, soups, cookies, potato chips, cake and ice cream and playing cards. The family is grateful for the friendship and care of numerous local caregivers and the staff of the Weirton Wyngate Senior Living Community and the Weirton Geriatric Center orchestrated by niece and god-daughter Mary Ann Chuburko Schwartz and her husband Mike Tome. Special thanks are also extended to Fiorelli and Gavatorta nieces and nephews who were lovingly attentive to Lillie.