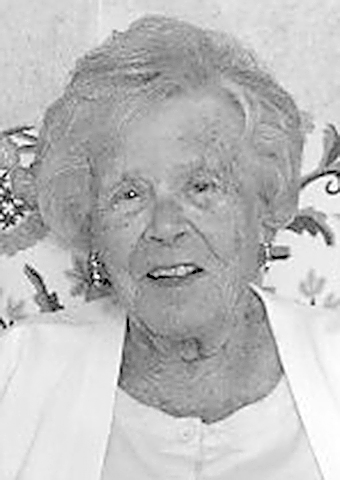 Lela Maxine Mountjoy, of Sparta, New Jersey, formerly of Chester, passed away Wednesday, March 6, 2019, at the Newton, NJ Medical Center following a brief illness. She was 93.

Born in Chester, September 19, 1925, she was the fifth of six children of Charles Oriel and Nellie Adele Calhoon Mansfield.

Maxine was a secretary at Allison Elementary School in Chester, retiring in 1989 after more than 25 years.

Survivors include a daughter, Sandy Morgan and her husband, Dan, of McDonald, Ohio, Rich Mountjoy and his wife, Anne, of Sparta, New Jersey and her sister, Martha Hudson Goodrich of Jensen Beach, Florida. There are five grandchildren, Matt Morgan (Tricia), Katie Brake (Matt), Clare Mountjoy, Ellen Geaney (Ben) and Mark Mountjoy and his fiance, Kristen Fanale; as well as five great-grandchildren, Lennon and Zach Morgan, Duncan and Phoebe Brake and Bentley Geaney; and several nieces and one nephew and their children and grandchildren.

Friends may visit Friday, March 15 at the Dawson Funeral Home where the family will be present from 4-8 p.m. Rev. Katrina Lewis will conduct a funeral service Saturday, March 16 at 10 a.m. at the funeral home. Burial will be at Locust Hill Cemetery.

In lieu of flowers, memorial tributes may be made to: The Lynn Murray Memorial Library in Chester, WV, or a charity of your choice.