‘The People’s Convoy’ draws a crowd 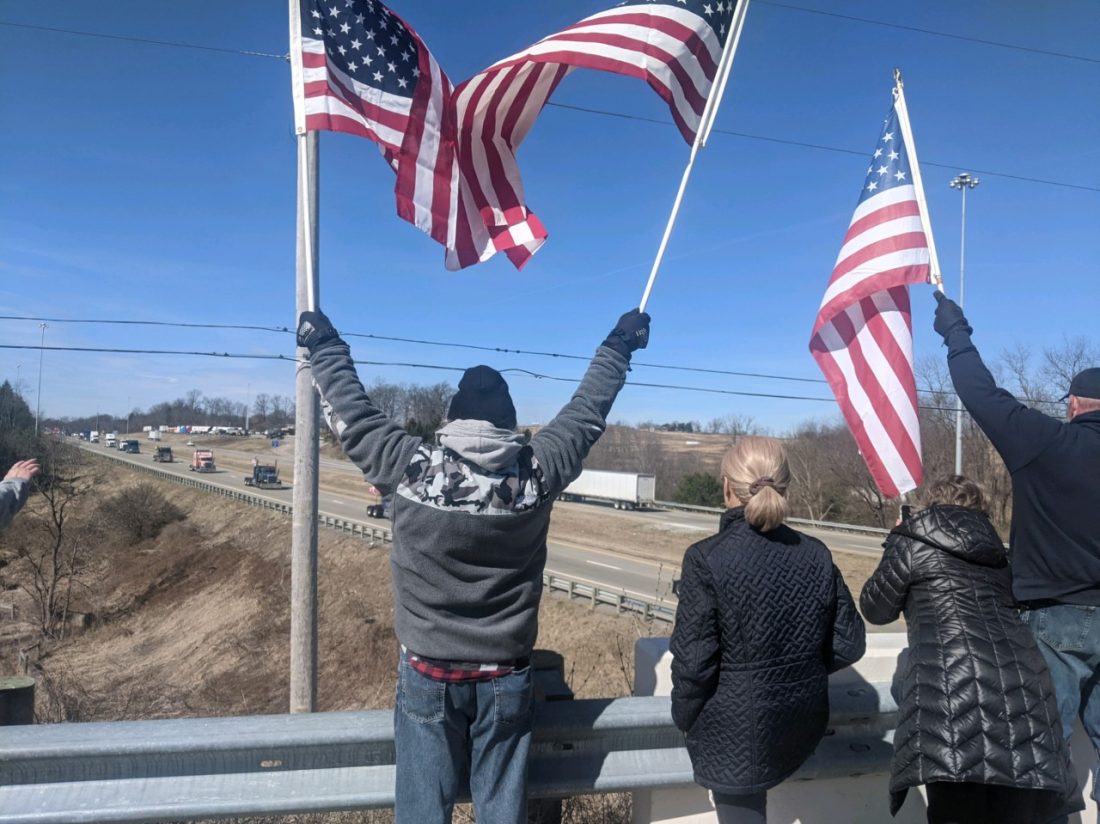 BELMONT — People from across the Ohio Valley came out to show their support for The People’s Convoy on Friday as it passed through Belmont County.

Residents lined the overpasses that span Interstate 70, holding signs, flags and banners while waiting for the convoy to make its way through the area.

The convoy is composed of truck drivers and their supporters who are making their way from Adelanto, California, toward Washington, D.C., as a form of protest against COVID-19 mandates. Organizers are working to promote freedom and urging that all mandates be lifted along with the state of emergency, according to a release. The group arrived in Cambridge, Ohio, on Thursday evening, where they stayed before departing after 10 a.m. Friday.

Local residents eagerly waited to get a glimpse of the convoy as it made its way along I-70 from Cambridge to Hagerstown, Maryland. Judy McManus of Belmont was one of the first to take a spot on the Plainfield Road overpass near Belmont, arriving just after 8 a.m. She said her son, Chip, is a truck driver in Texas, which is what prompted her to attend. Though her son is not a part of the convoy, she said she wanted to support the truck drivers in what they are working toward.

“I support this 100 percent,” she said, adding that she is against the mandates.

McManus said the Shekinah Christian Church, where she is a parishioner, cooked and delivered enough food for 500 of the convoy participants and supporters while they were in Cambridge Thursday night.

As the morning wore on, around 70 people gathered on the Plainfield Road overpass. Signs of support were hung along the chain link fence that protects pedestrians, along with a series of American flags. Motorists driving by honked their horns every so often as they drove past to echo their support.

Sara and Warren Ellis of St. Clairsville each held flags atop the overpass. Warren, a Vietnam veteran, said they are patriots who believe in freedom.

“We believe in the basics — freedom, the Constitution, God, all of it. We’re just here to offer our support. We love this country and want it to be free and to have the freedom of choice,” he said.

Tanya McIntire of Belmont said she has family and friends who are truck drivers. She said she came to the rally to show support and solidarity with the truck drivers and what they stand for.

“They move the nation,” she said, adding that a friend of hers joined the convoy in Indiana and has been driving along with it for the past couple days.

McIntire said she is against the mask and vaccine mandates and hopes they will end sooner than later.

“Enough is enough. A suggestion is one thing but a mandate is another. No one in a free world wants to be told what to do,” she added.

Christine Butkus of Belmont was one of a few dozen people standing on the South Pancoast Road overpass Friday. She said she supports the “freedom convoy” and does not believe in any of the mandates.

“They are fighting for our freedom and rights back,” she said.

Butkus said she spent 119 days fighting against a local school’s “Mask to stay, test to play” policy, which was recently lifted. She said her son refused to play basketball last season because of the numerous COVID tests he would have had to take if he did. This has helped her understand what the truck drivers are experiencing, she said.

Butkus said she hopes the convoy aids in the truck drivers’ fight against mandating vaccines for their jobs.

As the convoy passed through Belmont County at around 11:30 a.m., those gathered along the overpass waved flags, took photos and cheered. Those in the convoy — including tractor-trailers, trucks, cars and RVs covered in flags and banners — honked their horns and waved back to the supporters.

STEUBENVILLE — The Ohio State Highway Patrol, in conjunction with Cross Creek Police Department and the ...

CADIZ — A Cadiz resident is accused of raping an adult, leading to his suspension from his duties within the ...

STEUBENVILLE — Jefferson County commissioners have set the wheels in motion for some much-needed renovations at ...

Back in the frontier day

Teapot reason to celebrate in Chester

Trubisky to start at QB in Steelers’ preseason opener