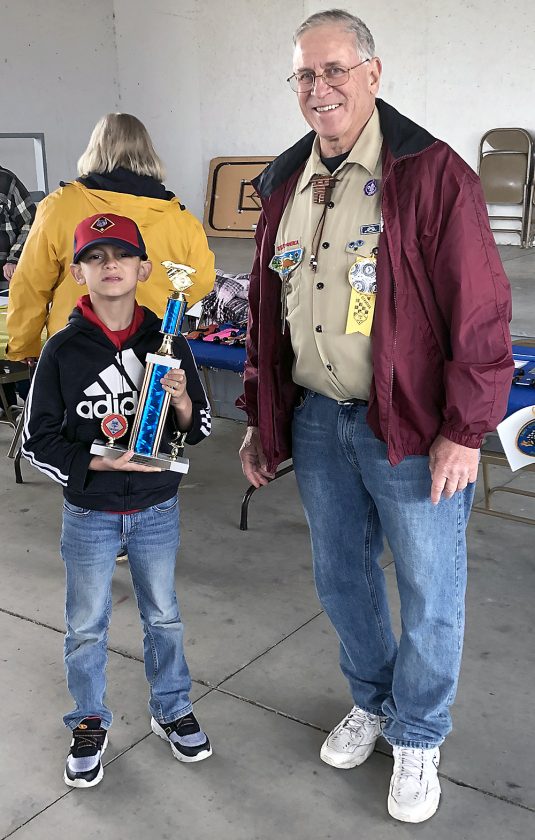 Joe Kovaleski, right, who has served as chairman of the Boy Scouts of America Two Trails District’s Pinewood Derby for more than 40 years, congratulated Emmett Gilchrist of Pack 1553, Wellsburg, on winning the best of show car design at the 2021 derby, the initial year for the first-time award. The derby was held at the Rosza Pavilion at Friendship Park in Smithfield in 2021, but returns this year to the Fort Steuben Mall in Steubenville next month. -- Contributed

STEUBENVILLE — The Boy Scouts of America Two Trails District of the Ohio Valley River Council’s Pinewood Derby makes a return in 2022 to familiar surroundings and a familiar time of year.

The Feb. 5 competition for race-minded, make-your-own-car Cub Scouts from packs representing multiple counties will be back at the Fort Steuben Mall’s center court, and with it, the night-before family race stock class that got off track last year.

The race begins at 9 a.m. for all Cub Scouts — Lion, Tiger, Wolf, Bear and first- and second-year Webelos — from packs in the renamed district, formerly Two Chiefs District. Boys and girls from Jefferson, Harrison, Brooke, Hancock and Belmont counties will put their craftsmanship works to the test, vying for trophies awarded to the top six winners.

The deadline to register for a $5 entry fee is Feb. 1 and $8 afterward.

But that’s not to say the 2021 Pinewood Derby spun its wheels or was a wreck.

“Last year was good,” Kovaleski said of the Scout tradition held later in the year — May 8, to be exact — and at an outdoor venue — the Rosza Pavilion at Friendship Park in Smithfield — instead of indoors to allow for distancing and a safer environment because of COVID-19 protocols.

Eighty-three was the participation count, according to Kovaleski, who said that was slightly more than half the usual number involved. Between COVID concerns and a later date that conflicted with some being able to participate, the competition was still a success.

“I was real happy with that many participating, and everybody had a good time,” he said. “It was cold and windy that day, and it was the beginning of May, but the park basically let us have free rein and the kitchen area. They served food in the kitchen area at lunch time. Some volunteers made hamburgers and what not. It worked out really nice, and the park let us use everything, and they (Jefferson County Fair Board) were glad to have us out there,” he added.

Even so, he noted, “We kind of wanted to get it back to the normal time of year that we do Pinewood Derby in February so we’re back at the mall.”

Missing last year was the Friday night family Pinewood Derby race that begins this year at 6 p.m. on Feb. 4. It’s for those 11 years and older registered Boy Scout, Explorer, adult Scouter or a family member of a Scout in the Two Trails District. The registration fee is $5.

“We are back to the family stock car race on Friday night again like we have done in the past,” he said, noting the family hot rod class race will not be held because of a lack of participants in the last several years. “We used to do a hot rod race where it was kind of no-holds-barred with what the car was or how it was constructed, but there’s not been a whole lot of participation in the past several years, so we just axed that temporarily. We’re still going to do the family stock car race on Friday night where cars follow the same rules as the Cub Scouts do on Saturday,” Kovaleski explained.

In the Friday night family race stock class, anybody involved in Scouts at all can race, according to Kovaleski. “Anybody who wants to build a car and race Friday night can. A lot of times boys who have graduated from Cub Scouts into Boy Scouts will come and race their old car on Friday night that they made years ago,” he said. “Kids who have grown up and left the area and come back say, ‘Hey, I’ve got an old car sitting in a box somewhere. I’m going to race it Friday night,’ and a lot of these people were Cub Scouts at one time and have grown up and have kids of their own, and in a few instances, are working toward being Boy Scout and Cub Scout leaders in their respective areas,” he said.

“It gives an extra day of fun for everybody on that Friday evening,” he added.

“We talked about it before and last year said, ‘OK, we’re going to do this.’ The staff kind of picks what looks like the best original type design for the car.

“It just stood out and was a little bit different and showed the boy had something to do with it,” he said.

Kovaleski has been involved in the derby since 1987 and became its chairman a few years later.

For him and his wife, Suzan, the derby is always something to look forward to, something that never gets old.

“Suzan and I have been doing this forever, and a lot of people ask, ‘Why are you still doing it?’ and well, No. 1, there’s no one else who wants to take it over,” he said with a laugh, “and we like doing it. It’s been fun over the years since our boys were in Cub Scouts, and it’s some camaraderie that you have with parents and leaders, and the boys and girls enjoy it. It’s just nice to see kids doing something else beside playing video games. It’s a different approach to childhood, so to speak, where there are other things out there to do. Boys and girls love to get out and do things in a different environment, at different scouting events. The cub scout packs and their individual groups that they grow up through in cub scouts, they have different activities and go on tours and do things that a lot of children are not exposed to — they have fun, just like when we were kids we would play in the woods in the creek,” he said.

The Two Trails District goes from New Cumberland down to Bethany with the pack in Wellsburg “a pretty large pack.” On the Ohio side, it runs from the Empire area to Mingo Junction and Brilliant, Steubenville Wintersville and Cadiz and down into Barnesville “so it covers a big chunk.”

“The name change reflects a bit of a different area,” Kovaleski noted. “It actually widened it a little bit. In the past, the pack in Barnesville was not part of our area.”

The Pinewood Derby is a special tradition, according to Kovaleski.

“It’s one of the biggest things that goes on at the mall every year,” Kovaleski said. “There’s no other event that is this expansive there in the mall,” he added, expressing appreciation to this year’s major sponsors. They are the Fort Steuben Mall, Buckeye Mechanical Contracting, the Ville Restaurant in Steubenville, R. Davis and Sons Heating and Cooling, Buena Vista Honey Farms, Touch of Elegance Bakery, Wintersville Trophy Shop, Great American Cookies and Texas Roadhouse.

The sponsorships are something to be thankful for as is the involvement of a dedicated group of volunteers, according to Kovaleski, who said it takes about 14 to pull off the derby.

“It’s an event the kids look forward to, parents look forward to it, and it’s something different for the youngsters to do,” Kovaleski said. “It’s something different that kids can participate in. It’s one of the largest Cub Scout events that happens across the country. And it’s nice to see now that they’ve included girls in to that. We have girls in the winners circle, so it makes it nice. They have a good time,” he said, noting he and his wife like being involved in the derby. “It’s something we can do to help Scouting.”

The 2019 derby included the participation of girls for the first time with the 2020 Pinewood Derby having its first female winner, honors that went to Reagan Huggins of Pack 334 in Weirton.

The public is welcome to watch the races. There is no admission to do so.

The derby, which involves an age range spanning from kindergarten through age 11, has been a yearly staple.

The concept of the Pinewood Derby dates back to 1953 and the work of an enterprising Boy Scouts of America Cubmaster in Manhattan Beach, Calif. Donald Murphy was looking for what he said was a “wholesome, constructive activity that would foster a closer father-son relationship and promote craftsmanship and good sportsmanship through competition.”

From that concept, Murphy’s idea, which started with 55 Cub Scouts, has continued on through the generations, and today more than a million Scouts have participated.

Locally, it’s a tradition that has gone on for more than 50 years, though the venue has changed.

The races were first held at the Hub Department Store in downtown Steubenville, before they moved to the Fort Steuben Mall.