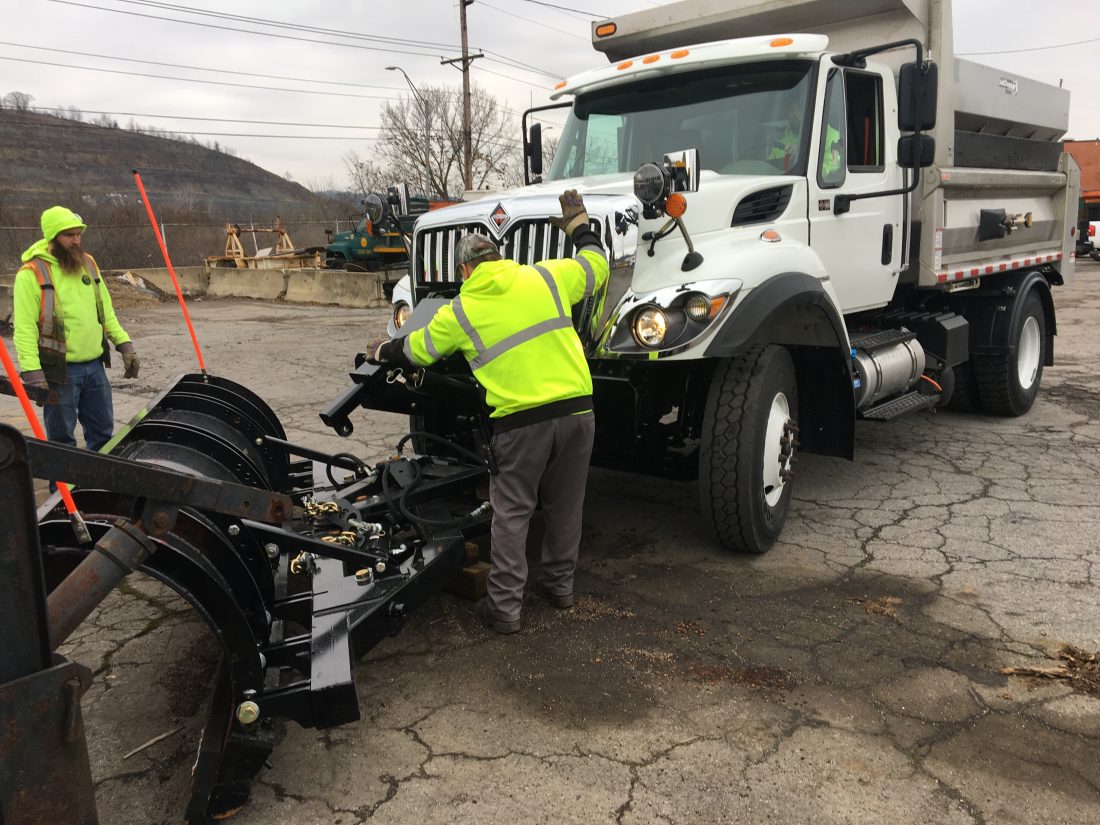 As the National Weather Service advises the region could receive between 4 inches and 10 inches of snow from a storm that is predicted to move into the Tri-State Area Sunday afternoon, area highway and street crews are preparing to hit the roads while asking area residents to exercise caution and patience.

On Friday, the Pittsburgh office of the National Weather Service issued a winter storm watch, effective from Sunday afternoon through Monday morning, advising large areas of Western Pennsylvania, Eastern Ohio and Northern West Virginia could receive 4 to 10 inches of snow.

Steubenville Street Superintendent Bob Baird said, “We usually get our best picture (of inclement weather), the closer we are to the event.”

But Baird said city crews had begun readying vehicles and equipment on Friday morning to prepare for whatever may come and have been scheduled through the weekend.

Lauren Borell, spokesperson for Ohio Department of Transportation District 11, said, “Crews will start reporting in around noon on Sunday and will work around the clock until the weather event is over. Our crews run in 12-hour shifts to provide 24/7 coverage.”

Borell said plans call for them to use brine to pre-treat surfaces, particularly bridges and overpasses most prone to freezing.

“Once the snow hits, we will adjust our materials accordingly, depending on how wet the show is and the temperature of the pavement and air,” she said.

Charlie Swart, West Virginia Division of Highways district director of maintenance, said crews normally are on call during the winter and are prepared to turn out when such weather is predicted.

“Whenever we have an event like this, it’s all hands on deck,” he said

Swart said crews will use a brine comprised of sodium chloride or calcium chloride to pre-treat roads, particularly primary routes.

He noted the solutions are only effective when roads are dry and can’t be used during heavy rain.

Swart said the division also uses standard road salt and has a supply of about 14,566 tons available. He added little of it had been used because the season had been mild so far.

Borrell reported ODOT District 11 has 61,900 tons of salt among stations in its seven counties.

Asked whether city crews will be pretreating roads, Baird said the city street department doesn’t currently have the materials for that, though it’s been discussed.

But Baird said they will have lots of standard road salt at their disposal.

“We have about 2,000 tons. Our consumption is down so far,” he said, adding, “This is not an average winter but even with winters that are mild, that doesn’t preclude a major event.”

Baird said a silver lining to the storm prediction is that called for “a heavy, wet snow, which is easier to deal with than freezing rain.”

Another silver lining is that all public schools are slated to be closed Monday in observance of Martin Luther King Jr. Day.

Officials with Edison Local and Indian Creek school districts have announced winter formals scheduled for Sunday have been postponed, with both now slated for Feb. 20.

Area road maintenance heads urged drivers to avoid traveling during the storm if possible, and, if they must, to allow additional time to reach their destinations.

“We see a lot of wrecks that could have been avoided if the proper speed was used,” he said.

Borrell advised, “Please give our crews plenty of room to work. ODOT’s plow trucks travel well below the posted speed limits for effective plowing and treating. Please allow plenty of distance between your vehicle and our trucks.”

“The plow driver’s field of vision is limited. As a general rule, if you can’t see the plow truck’s side mirror, the truck driver can’t see you. Always stay two to three car lengths behind the plow.”

Baird asked residents to move their vehicles from streets if possible. He noted it can be difficult for large plow trucks to navigate narrow streets, and crews need space to divert the snow.

The more snow that falls, the more space that is needed, he noted.

“We call it snow removal, but really it is snow relocation,” said Baird.

The local and state road maintenance departments also ask residents to be patient as crews set about clearing roadways.

About 2,300 miles of roads, both primary and secondary, are maintained by crews working from various headquarters in the six counties — including Hancock, Brooke and Ohio — that comprise WVDOH District 6.

And Borrell reported crews in ODOT District 11 are charged with about 3,580 miles of roadway in seven counties, including Jefferson, Harrison and Belmont.