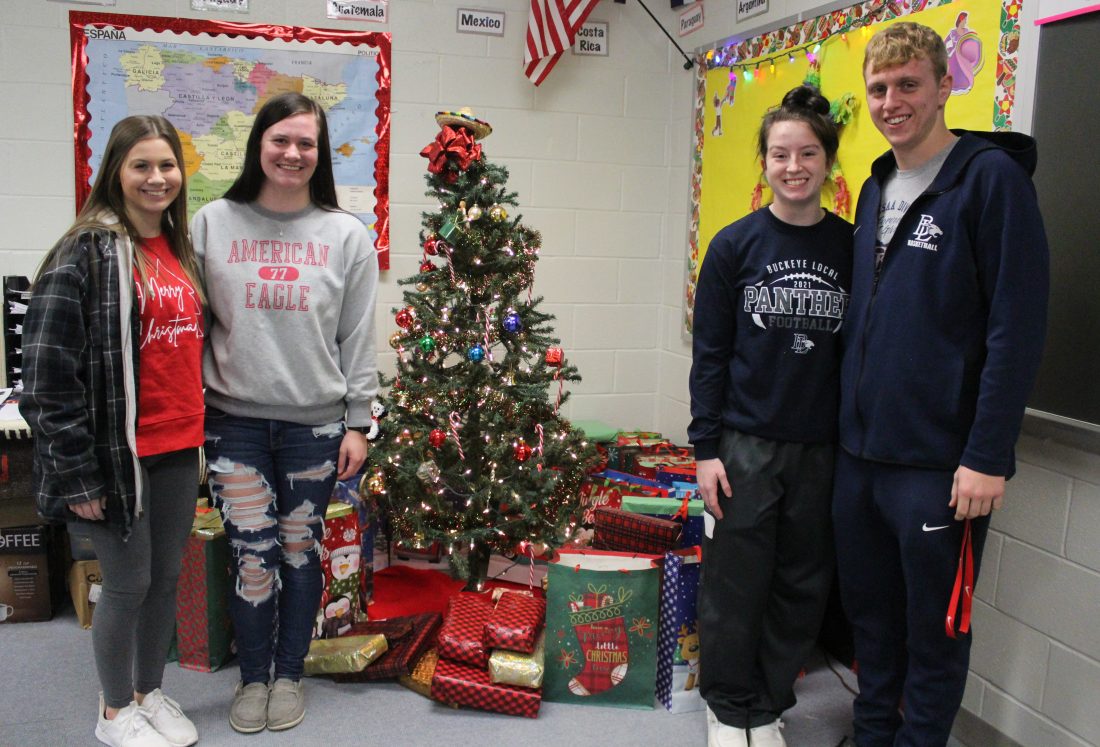 COLLECTION — Buckeye Local High School seniors Adrianna Blazeski, Bri Merkel, Aivri Ruttencutter and Ethan McHugh stand with a few of the items they collected through their Secret Santa project to brighten the holidays for fellow students. The group raised $1,600 as well as clothing and toiletries which will be distributed to those in need. -- Contributed

CONNORVILLE — Some Buckeye Local High School students are playing Santa this Christmas and making sure youth across the district have gifts under the tree.

Seniors Aivri Ruttencutter, Ethan McHugh, Bri Merkel and Adrianna Blazeski collected money and gifts through their Secret Santa project beginning in late November to make the holidays even happier for other students in need. Ruttencutter said McHugh sparked the idea and the teens took the initiative to organize a campaign.

“We were sitting in psychology class and Ethan had an idea to help kids, then I put it into action. We’ve had teachers, students and people donate throughout the community,” she said. “They donated money or items. We sent out a list for the junior high and high school and divided it up by gender. We also collected donations for all three elementary schools.”

The group also raised $1,600 and more than 300 items including clothing sizes small to extra large, plus they gathered toys, food and toiletries to assist their peers. Wrapped boxes, bags and other gifts filled rooms and corridors waiting to be distributed at Christmastime.

Meanwhile, Ruttencutter and McHugh said they were happy to help brighten the holidays a little more for others.

“It’s a good feeling to be able to help others who need it,” she said.

“It feels nice to help all the kids that are in need,” McHugh added.

Ruttencutter said another project is coming down the pipeline to create Easter baskets.