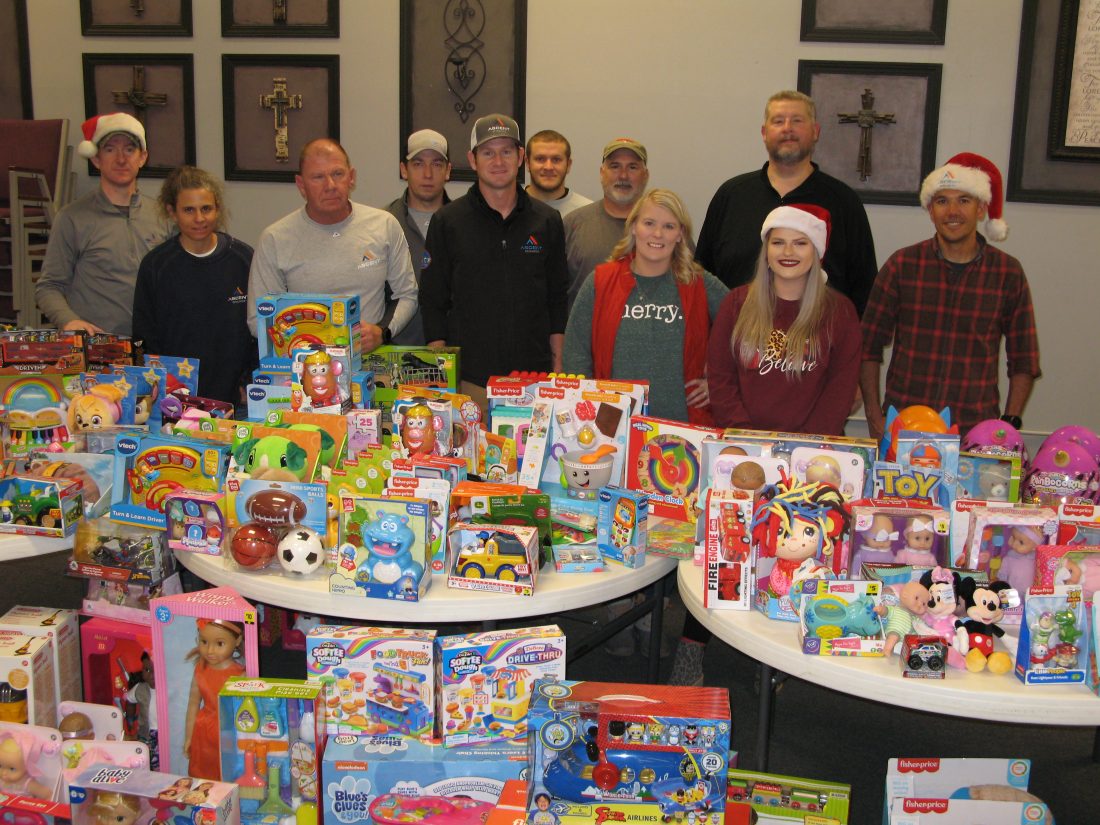 SANTA'S HELPERS — Employees of Ascent Resources volunteered to sort through hundreds of toys distributed to local families in need Thursday at Grace Point Ministries in Steubenville. It was one of five area toy distributions supported by businesses in the Ohio Oil and Gas Association and held with help from Toys for Tots. -- Warren Scott

STEUBENVILLE — About a dozen employees of Ascent Resources donned Santa hats and set about sorting through dolls, footballs, board games and other toys stacked inside Grace Point Ministries church Thursday as they prepared to make Christmas merrier for many local families in need.

The business is one of many members of the Ohio Oil and Gas Association, which in the last several years has conducted toy distributions in several eastern Ohio counties with help from Toys for Tots.

Mike Chadsey, deputy coordinator for the effort, estimated nearly $50,000 was raised by the businesses, vendors and contractors working with them and their employees for an effort that involved purchasing the toys at an area department store and delivering them by moving van to five distribution sites.

In his eighth year as a coordinator for the effort, Chadsey said reactions from the families aided varies.

“Sometimes you’ll hear a story that makes you tear up,” he said, referring to the circumstances that have led households to be struggling financially.

“Sometimes people are so grateful, they give you a hug.”

Chadsey added there are some who speak little, often because they feel awkward about accepting help and that’s OK.

“We want to treat everyone with dignity,” he said.

Among Ascent employees volunteering Thursday was Brent Riggle, who revealed it was his first year to be involved. The father of three daughters, he took a little ribbing about his knowledge of Barbie dolls.

“I’m thrilled to come into this. This event has been absolutely wonderful,” he said.

Joe Steele, a safety supervisor for Ascent, noted the effort also was supported by about 100 vendors and contractors doing business with the company.

“They come through for us every year,” he said.

Chadsey also expressed thanks to the pastor and congregation of Grace Point Ministries for lending their spacious facilities, including a sound system on which Christmas music was played, for the distribution.