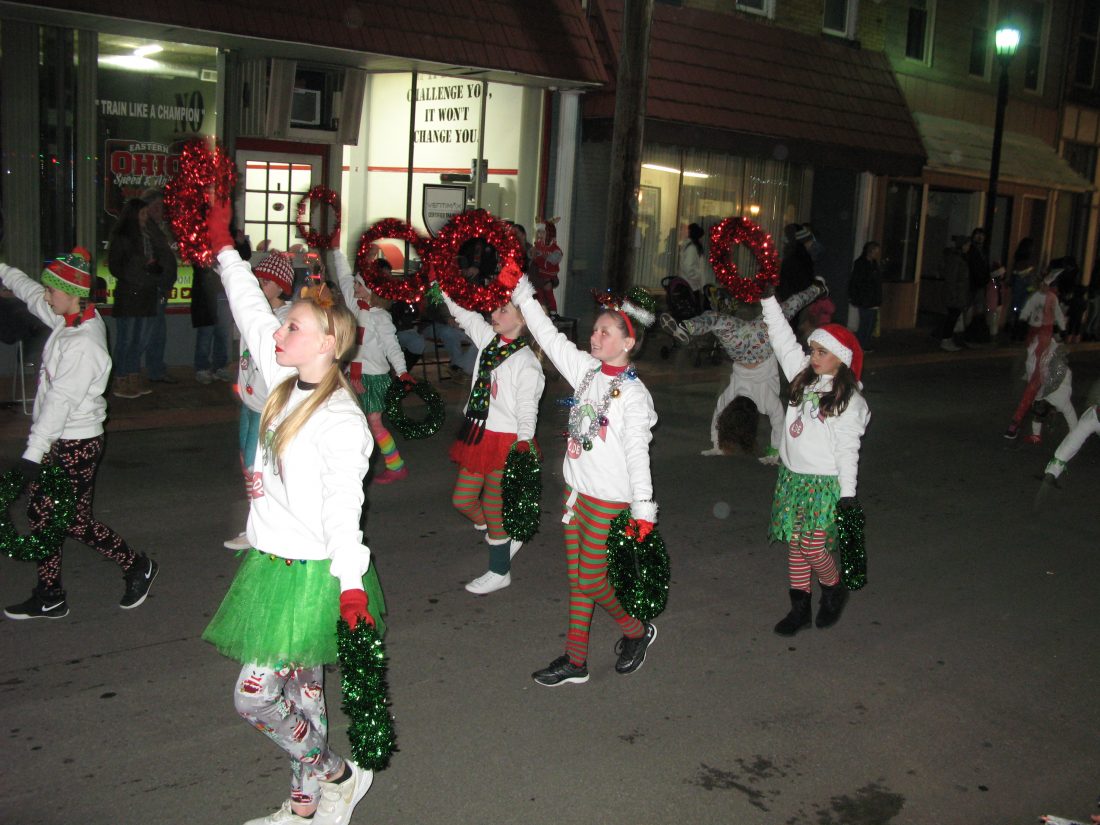 TORONTO — Toronto also is known as the Gem City so it was fitting that floats, vehicles and even dancers shone brightly as they made their way down Fourth Street in the city’s Christmas parade Saturday evening.

Organized by volunteers with Focus in Toronto, the procession featured a variety of entries, many of them decorated with lights.

Heading the parade were vehicles from several area emergency departments, with one carrying former Toronto police chief Randy Henry, who was named grand marshal for his 41 years in law enforcement.

In addition to bright lights, floats were decorated by local businesses, churches and other groups with Christmas trees, colorful packages and bows and included the scene from “A Christmas Story” in which Ralphie is dressed in a pink bunny suit and two versions of Dr. Seuss’ Whoville of “How the Grinch Stole Christmas!”

The Toronto High School Marching Band delivered a medley of Christmas songs while Santa Claus made a special appearance at the end, stepping out of his sleigh-like float for a bit to greet parade-goers one to one.

He and Mrs. Claus also were on hand afterward to meet with children at the city’s Gazebo Commons.

It’s been a busy month for Focus in Toronto, whose members also are behind the Toronto Christmas Art Festival, which will be held from 10 a.m. to 5 p.m. Saturday at the Karaffa Recreation Center.

There will be assorted food trucks on the school’s parking lot and activities for children inside.

Admission for the latter is $5 per family, with proceeds helping to send Toronto High School students to the Close Up program in Washington.

Parade-goer Dru Jenkins of Toronto remarked that, following a year when many events were canceled because of the pandemic, it seemed like volunteers were working even harder to make this year’s Christmas special.

Susan Matthews of Empire was among attendees who were asked what they liked best about Christmas in the Ohio Valley.

“The Nutcracker Village comes to mind first,” said Matthews, who added, “We’ll be going to Oglebay (for the Festival of Lights) tonight, too.”

Her sister, Cathy Arabia, said she enjoys coming to the Toronto parade each year, but the best thing about Christmas in the Ohio Valley is the people with whom she’ll spend the holiday season.

“This is where my family is and it’s all about spending it with them,” she said.