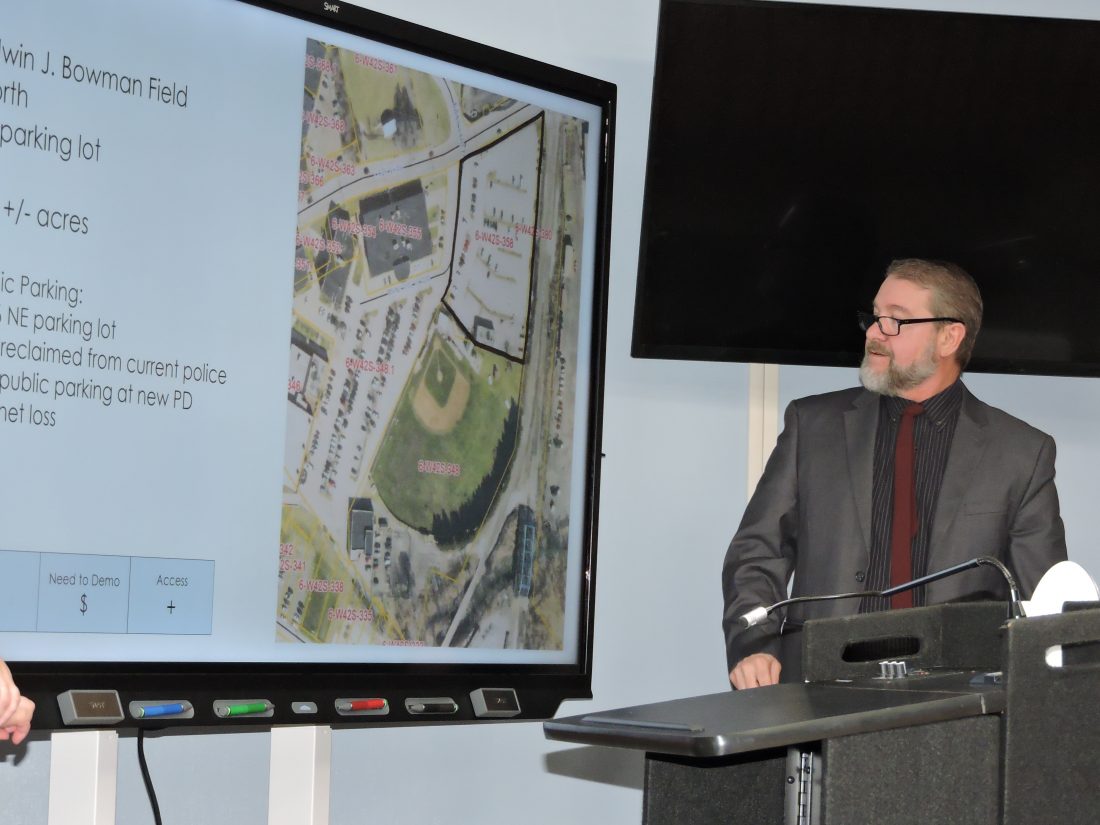 DISCUSSION — Ward 7 Councilman Terry Weigel discusses one of the options for the proposed public safety facility in Weirton as part of a council workshop and town hall held Monday by city council. -- Craig Howell

WEIRTON — Debate continued over a proposed public safety facility in Weirton Monday, with city council hosting both an informational workshop and a town hall on the subject.

During the work session, representatives of Horne and King Architects presented updated information on several potential sites for the project, each with alternative land use plans.

“They are basically five different sites,” Sharon Jurawitz explained, noting each site had options for land use configurations.

Ward 7 Councilman Terry Weigel explained councilmembers have been visiting each site, considering each potential design and whether they could work for the planned facility.

“We’ve spent hours and hours visiting and looking at the pros and cons,” Weigel said.

Jurawitz noted an estimated base cost for a 17,660-squre-foot building would be just over $7 million, with a proposed 20-space car port an additional $1.38 million and a firing range $1.79 million. Alternative designs, depending on the location and additional needs, could lower or increase the costs, she said.

Finance Director Diana Smoljanovich noted the city most likely would have to finance the project, with several council members saying there has been no discussion of increasing taxes or instituting a levy.

As part of the town hall held later in the evening, residents filled council chambers and spilled out into the hall, with close to 10 addressing council. Most of the comments sought to discourage the use of the baseball field for the project, with speakers asking council to consider the youth of Weirton and the future recreational opportunities.

Business owner Jill Jones asked about the possible effects to those who currently use Bowman Field, noting the Hancock County Board of Education is planning new fields for Weir High School, but that doesn’t guarantee an opportunity for other teams.

“What happens when that field goes away?” she said, encouraging council to fully consider the other sites. “There are all these options.”

Parks Executive Director Coty Shingle also spoke, saying he and the Park Board have nothing against the police department, but they want to keep the ball field open.

Shingle also noted, in accepting the federal grant last year to begin improvements to Bowman Field, the city is required to keep it for recreation in perpetuity.

City Attorney Vince Gurrera, though, said there were stipulations attached to that agreement requiring certain project milestones to be met.

Shingle also presented a copy of a petition organized by residents, with 658 signatures, in favor of keeping Bowman Field open.

When asked by council about the possibility of local teams using the field along Kings Creek or the Starvaggi fields in Paris, Pa., residents said none of them are big enough for high school baseball.

After hearing from the residents, council noted discussions will be ongoing and they continue to look for ideas for the project, encouraging more input from the public.

“We’re looking for options and alternatives,” City Manager Mike Adams said, adding the city wants to find something that will work for everyone.