Holiday vigil in Toronto a time for reflection 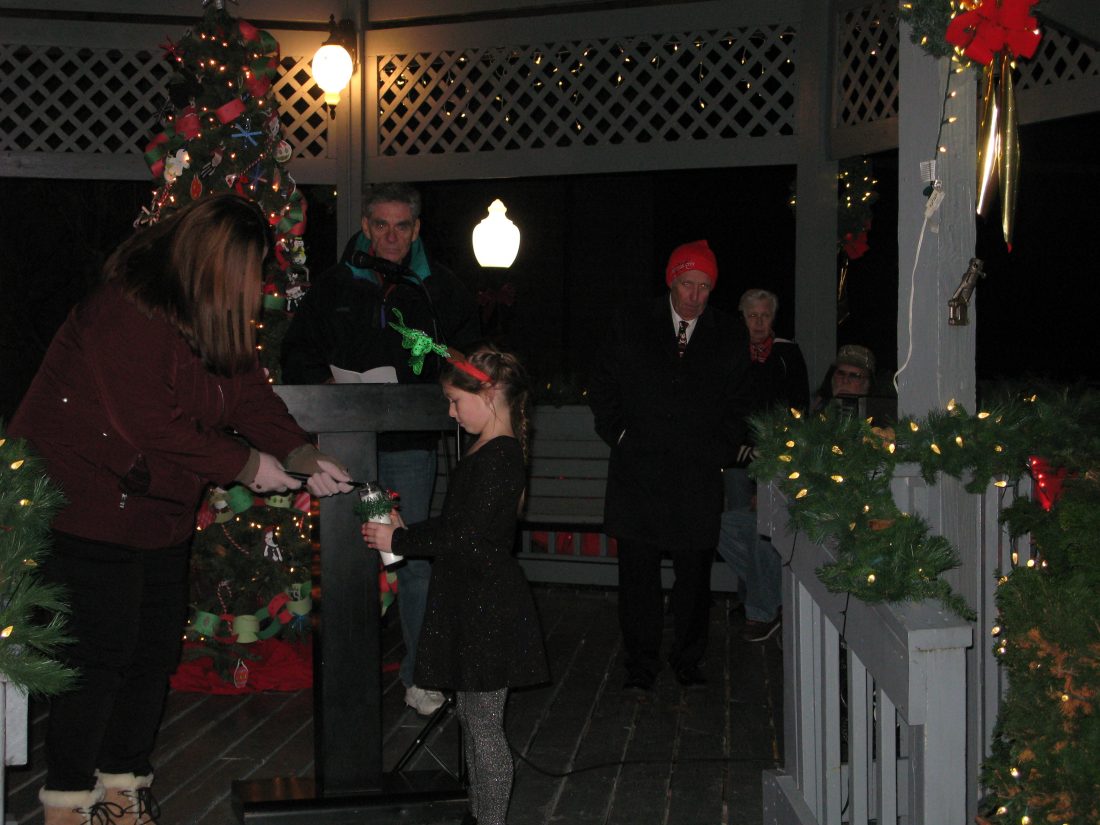 CANDLE LIT — Gabby West, a third grader at Toronto Elementary School; holds a candle to be lighted by Annie Silverthorn, the school’s principal; during a Christmas vigil Tuesday at Toronto’s Gazebo Commons. A holiday tradition for the city, the event included the presentation of hundreds of candles sponsored in memory or honor of loved ones and fellow residents, with proceeds going to six local causes. -- Warren Scott

TORONTO — The chilled night air didn’t stop many residents for carrying on a holiday tradition Tuesday at the city’s Gazebo Commons.

For many years, the Toronto Coalition for Revitalization has invited citizens to remember loved ones, living or dead, by purchasing candles to be lighted at the park one evening during the week of Thanksgiving.

The ritual was canceled last year because of the pandemic, but Torontoans made up for it this year, sponsoring about 400 candles and raising more than $5,000 for six local causes.

Organizers dispensed with the usual lighting of each candle, but commenced with the reading of the many family members, friends and neighbors remembered by those close to them.

Joining George Komar, the coalition’s president; in reading their names were Don Clarke of Clarke Funeral Home and Jay Foster of J.E. Foster Funeral Home, who included the names of the many whose final arrangements they handled during the last two years.

The funeral homes and many other businesses also made contributions to the fundraiser.

In opening the event, coalition member Jon Greiner noted it’s both somber and joyful, as it brought together many to mark the start of the Christmas season.

The coalition closed the event by presenting $1,075 checks to Helping Hands, a local food pantry; the Coats for Kids program supported by the Toronto Kiwanis Club; the Toronto City Schools Student Needs program and Toys 4 Toronto, an outreach of Crossroads Christian Church that will provide Christmas gifts for more than 125 children.

Komar said because contributions were so great this year, the group decided also to donate $250 each to Toronto American Legion Post 86 and its auxiliary.

He said there are many who make the event possible each year.

Members of Cub Scout Pack 41 and Girl Scout Troop 3196 assisted in distributing the candles, while Gabby West, a third grader at Toronto Elementary School; presented a token candle lit by Annie Silverthorn, the school’s principal; and aided in lighting the Christmas tree at the gazebo’s center.

It and many other decorations were placed around the park, the city’s north and south entrances and other locations by members of the Toronto Beautification Committee, Toronto High School girls basketball team and Teddy Troski and other city personnel.

Komar noted nearby First Presbyterian Church of Toronto always stands ready to provide shelter in the event of inclement weather.

He said while the air was very cold on Tuesday night, he can recall years when snow fell on the many citizens as they gathered to carry on the holiday tradition.