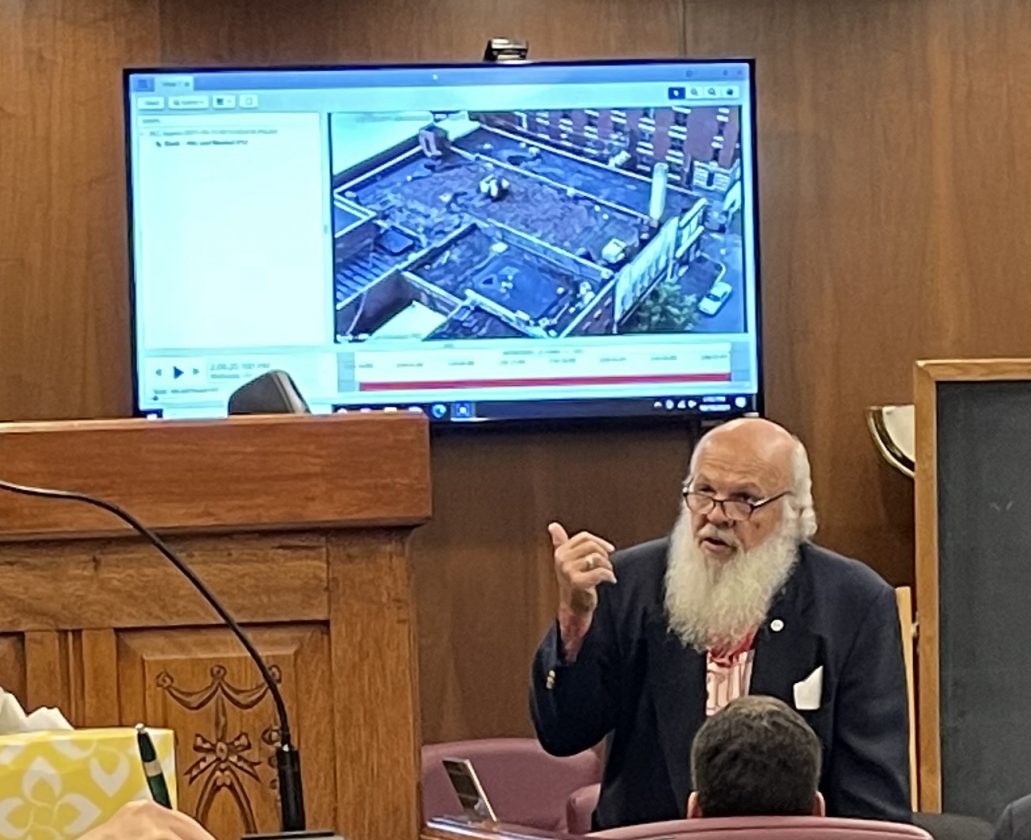 A CONCERN — Steubenville 6th Ward Councilman Bob Villamagna gives council a birds-eye look at the rundown condition of roofs on some properties in the downtown area. -- Linda Harris

A clearly irritated Villamagna said he takes exception to suggestions city employees go out of their way to torpedo business prospects in the downtown, showing those at the weekly council meeting slides of downtown buildings with gaping holes in the rooftops. Trees are growing through some roofs, he said.

“I’m tired of hearing (bad things) about a building department which is doing great job,” Villamagna said. “It’s these buildings that are bad.”

He said the owner of a Fourth Street property was cooking at high temperature without a vent, charring the wall.

“When a wall gets charred like that, you’re a minute away from a fire,” he said. “They said they didn’t know and stopped. A couple of weeks passed and they were in there again, cooking. That time the health department came in and (shut them down) … They don’t have hoods, they don’t have the necessary things to run that type of business.”

He also recalled a building in the 300 block of Market Street a female wanted to open up. She went inside to look at it, the water pouring in through the roof. That was the end of that.”

Another bought a downtown building sight unseen and called to have the power turned on.

“When our inspectors went up there and she saw inside of the building she was flabbergasted,” he said, adding, “That’s why so many buildings cannot get occupancy permits.”

He said city workers “get blamed for doing what’s right.”

“A building official’s job is not to design buildings,” he said. “It’s to make sure your building, for your safety and your buck, is designed right.”

Council, meanwhile, continues to ponder the need to improve parking in the downtown.

“If you look ahead, if you look into the future, you’re going to want business to come,” 1st Ward Councilwoman Asantewa Anyabwile said. “Business will come if there’s parking for their customers, if there’s places for people to go.”

Anyabwile asked council to at least look into the feasibility of doing on a study on parking in the downtown, saying, “We need to look to the future. That whole notion of downtown Steubenville being unsafe is just unfounded.”

Fourth Ward Councilman Scott Dressel said the city has a lot of parking people simply don’t use because people don’t realize it’s available. He also pointed out downtown’s parking problem is not a new problem.

“This isn’t news to anybody, that parking’s a problem downtown,” he added. “It’s been a problem since downtown was built.”

City Manager Jim Mavromatis recalled how, growing up, “all the shops were open, the downtown was wide open. I don’t know where all these cars parked that came here. I’m sure that the councils back then probably heard (complaints) about parking, but I remember coming down as a kid for parades, cars were parked everywhere. And there’s less people here, less stores…”

Fifth Ward Councilman Willie Paul, meanwhile, said he’d like department heads and council to try to figure out a way to ease the load on city residents who’ve had to contend with higher water and sewer rates.

“My feelings are that we have millions of dollars handed to us, including grant money, to offset all our water and sewage infrastructure projects, why not give our citizens a break on their water bills?” he said. “Several years ago, when we raised the water rates, all of council at that time, every council person, tried every way we could to ease the burden — we were reluctant to raise them but we had to do it. I think they deserve some relief.”