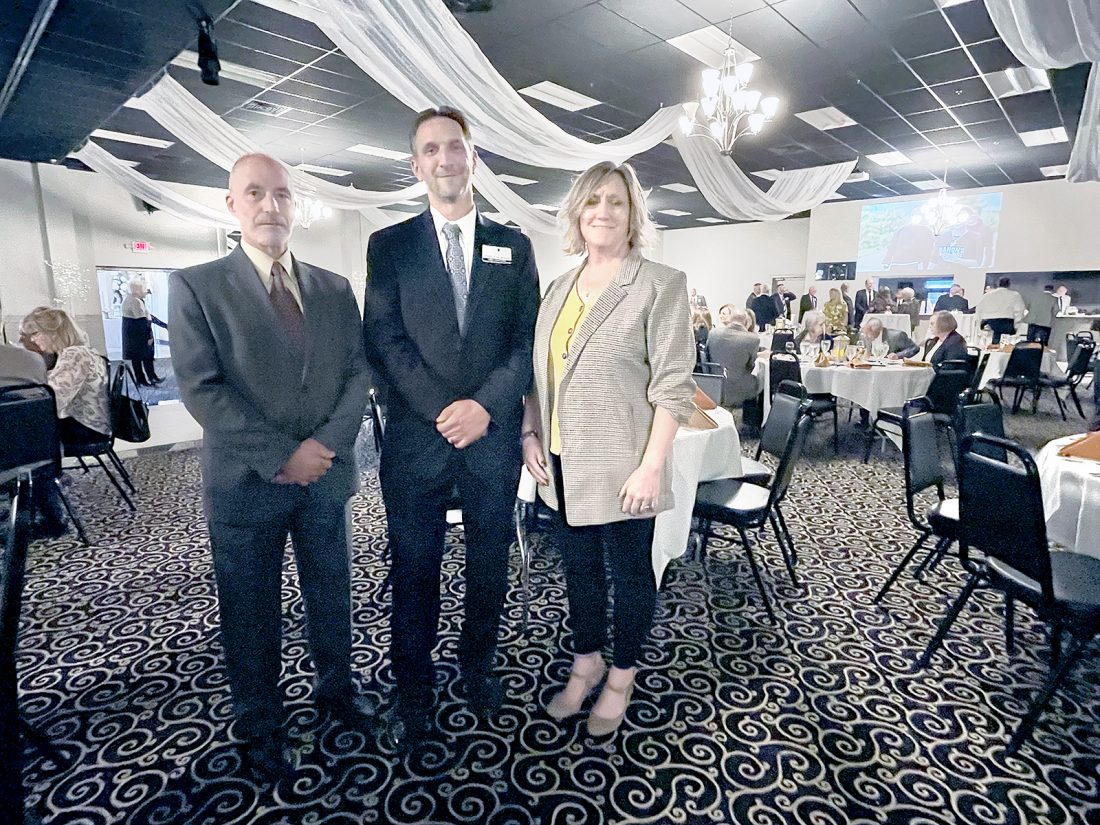 A CELEBRATION — Jefferson County Chamber of Commerce members gathered Wednesday to celebrate the accomplishments of the past year. Among those taking part in the festivities were, from left, Craig Cribbs, treasurer of the chamber board; John Cucarese, chairman of the board; and Tricia Maple-Damewood, president. Maple-Damewood is stepping down as president at the end of the year. -- Linda Harris

Maple-Damewood, who is leaving the chamber at the end of 2021 after seven years at the helm, said the festivities were held “in part to honor the small business community that has had and continues to have such a challenging time” during the pandemic.

The Lifetime Achievement Award was presented posthumously to the family of the late Suzanne Kresser, a longtime chamber member, community leader and volunteer.

The award is presented annually to “someone who’s made a difference through the years, not just in business but as a true community advocate, recognizing those who consistently and passionately try to make our area better … not for money or recognition, but simply because they think it’s the right thing to do,” Maple-Damewood said.

Kresser, who served on a multitude of boards and committees, lost a “sad and shocking and short battle with cancer in June,” she said, adding she was “just a truly selfless person.”

Accepting the award were her parents, Linda and Frank Slowikowski and sister, Sherri Wilson.

“Suzanne loved this community, she loved everything in it,” her mother said. “I know she’s looking down from heaven.”

Also honored was Jeffrey Schuetz, Ambassador of the Year, and in keeping with chamber tradition, outgoing board members Chris Orris, Valley Hospice, and Melony McBride, Main Street Bank, were presented with bricks inscribed with their names at Historic Fort Steuben.

In a recorded message, Mitchell shared his rags-to-riches story with members, telling them he’d come from a broken home and had fallen into drugs and alcohol when he was 12 years old. By the time he was a sophomore he was incorrigible and children services was hovering, so he ran away from home for a time. When he reconciled with his mother, he had to get a job in the school cafeteria to pay for his school lunches and a job washing dishes in a local steakhouse. He said he was a lackluster employee at best, the “laziest guy in the kitchen” with a poor attitude until the day he had an epiphany — his first — and realized he’d found his calling. He went home and mapped out a five-year plan for himself.

“I went back to work next morning, hardest working guy in kitchen with best attitude,” he said. “I was no longer working for the man, I was working for myself, my future and my career. I literally did a 180 degree turn in that 24-hour period and never looked back.”

He said he had another of those epiphanies a few years later when he was working for a restaurant group. “I started to hit my head on the ceiling, my boss was a micromanager,” he said. Two months later, he quit his job and spent the next 14 months planning his next moves.

Mitchell said he took his time, opening his first restaurant in October 1993. His first order of business was writing out his culture and values, “(because) I wanted to birth a company, I wasn’t opening a restaurant.”

Paul Hoback Jr., chief development officer of the Allegheny County Airport Authority, told chamber members the $1.4 billion terminal modernization now under way will be transformational. He said outward appearances belie the deteriorating mechanicals behind the scenes, like the people-mover and luggage movers.

The new complex, which Hoback said should be done in 2025, is expected to have a $2.5 billion impact on the local economy and create just over 14,000 jobs. It’s the first airport designed and built from the ground up since the pandemic began.

Hoback said it will be a reflection of the region it serves, with elements showcasing nature, technology and community: Inside, for instance, the design will incorporate wood elements and live trees. There’ll also be four outdoor terraces for travelers.

He said they’ve also made a conscious decision to locally source contractors and materials.

The theme of this year’s chamber meeting was “The Long Road Back: Business in a New World.”