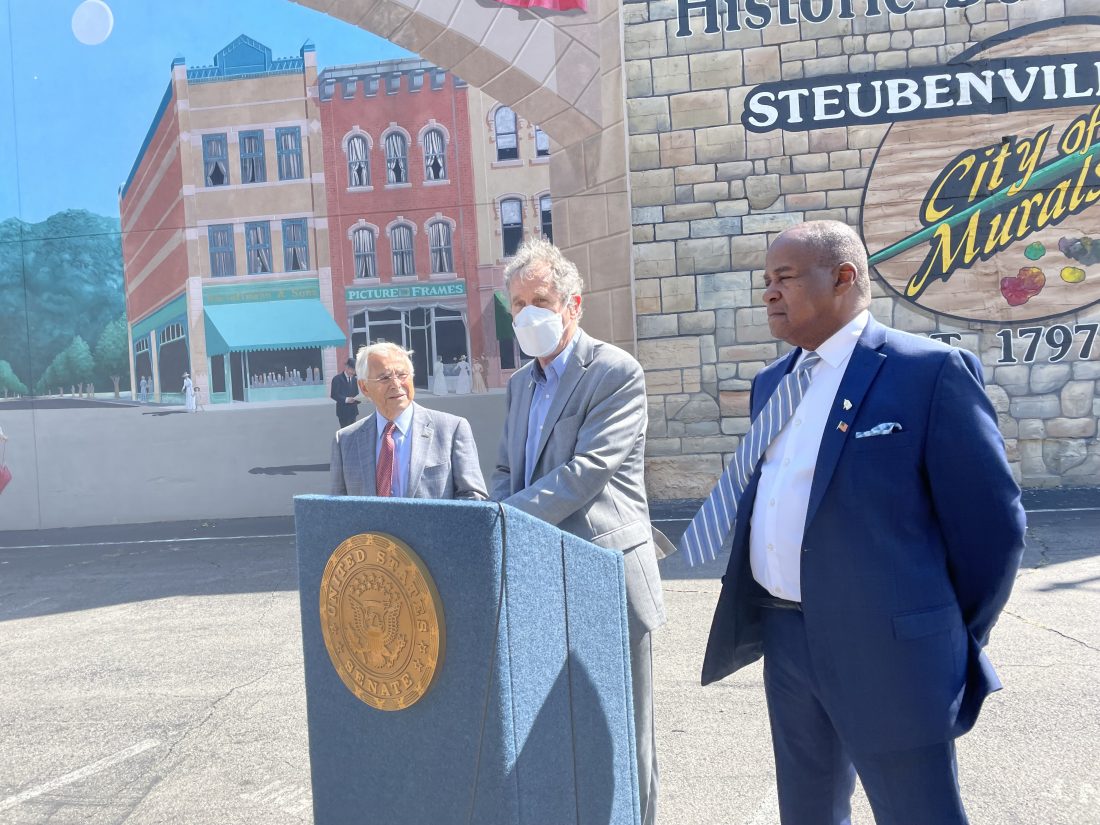 STEUBENVILLE — U.S. Sen. Sherrod Brown, D-Ohio, told community leaders Monday the $3 trillion bipartisan infrastructure bill is a chance to repair, rebuild and upgrade aging infrastructure, much like the American Reinvestment Recovery Act did a decade ago.

Brown said the bill should be signed into law in October, “then we’ll start getting the money out to the states, and some will go straight to the communities.”

“Ohio (is expected to) get about $9.8 billion to repair and replace and upgrade roads and other transportation infrastructure, not just in Columbus and Cleveland, but also Steubenville, Mingo Junction, Wintersville and towns all up and down the river,” Brown said, pointing out the Buckeye State has an estimated 3,200 bridges in need of repair, coupled with aging water and sewer systems. “Local taxpayers can’t afford to do the upgrades we need. The city understands that, the community understands that, taxpayers understand that.”

Brown was joined at the dais by Wintersville Mayor Robbie Martin and Steubenville Mayor Jerry Barrilla, who talked about the importance of federal funding to aid infrastructure upgrades, as well as small business owner Amy Patterson, who discussed how infrastructure dollars could spur economic opportunities.

Martin spoke of the “dire need” for assistance.

“We want to be proactive in what we do to make sure if see things that have to be done, we don’t wait for them to break all the way,” Martin said. “(We need to) bring people into the city and keep them there. To do that, we need to make sure we have sufficient water, sewers, broadband.”

Martin said communities like Wintersville depend on federal funding to help fund those much-needed upgrades.

“We have these projects already on our schedule to do, but we have to wait for these different grants that we’ve filed for,” he said. “We don’t always score big — sometimes we get them, sometimes we don’t, but we’ve been very proactive out there. We want to be proactive in what we do to make sure if we see things that have to be done, we don’t wait for them to break all the way.”

Barilla pointed to the Washington Street Bypass, paid for a decade ago with $7.5 million in American Reinvestment Recovery Act funds.

“Steubenville and towns like us can’t afford to spend that kind of money to do infrastructure work, so we need to and have to rely on the federal government to help fund these major projects,” he said, ticking off a long list of infrastructure upgrades on the horizon that will cost a “massive amount of money,” he said.

Adding to his woes: Barilla said City Engineer Mike Dolak told him the John Scott Connector is in need of a $5.5 million fix.

“I can invest in more jobs for people,” she said. “The more I grow, maybe I can give my people benefits. I have a strong team under me, I want to be able to pay them what they’re worth.:

Brown said the bill contains one of the “strongest provisions ever in an infrastructure bill to buy American.”