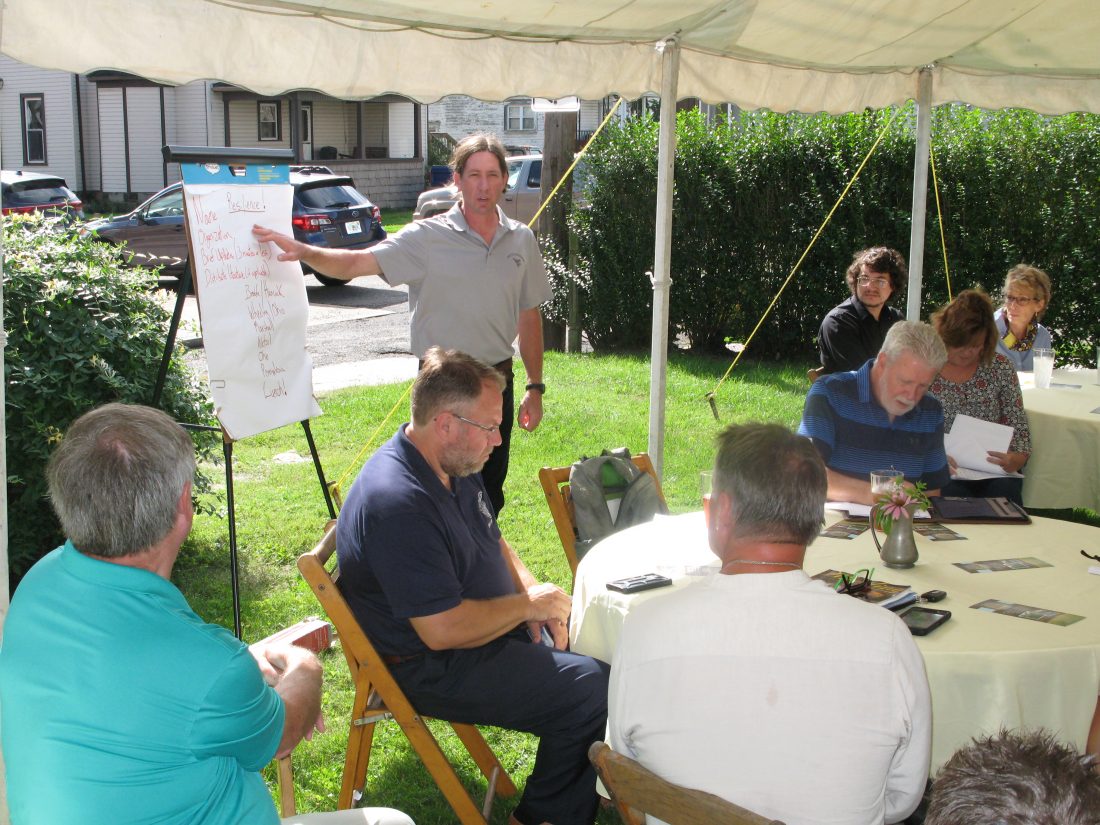 WORKING TOGETHER — Doug Arbogast, regional tourism specialist for the West Virginia University Extension Service, invited leaders of many area tourism-based organizations to share their current projects and upcoming events during a meeting of the Visit Upper Ohio Valley Tourism group Wednesday at the Sarah Miller House in Wellsburg. -- Warren Scott

WELLSBURG — Leaders of about a dozen organizations from both sides of the Ohio River gathered Wednesday to share upcoming projects, events and ideas that may be helpful to their peers.

Chatman Neely, president of the West Virginia Bed and Breakfast Association, said the Visit Upper Ohio Valley Tourism group can best attract visitors to the region by working together as he welcomed them to the Sarah Miller House, part of the Barn With Inn bed and breakfast run by him and Dr. Harry Sanford near state Route 27.

“We’re the best thing we’ve got going. If we promote each other, we’re going to do better,” Neely told the group, who attended a luncheon meeting held outside.

It was the first time in several months the group had met in person, having resorted to virtual meetings because of the pandemic.

Many said after COVID-19 forced them to postpone or cancel events or adapt them to outdoor settings, they hope to come back strong with a variety of occasions ranging from fall festivals and concerts to art shows and scenic tours.

Jim Brockman, executive director of the American Defenders of Bataan and Corregidor Museum and Education Center, noted it and the Brooke County Public Library, where it’s located, reopened several months ago.

He said the museum has become home to 1.5 million pages of documents, about 35,000 photos and 10,000 artifacts all related to the experiences of Allied Forces captured while defending the Philippine Islands and others who served in World War II.

Brockman said a grant from the West Virginia Humanities Council will allow the many donations to be digitized for posterity and virtual access.

Alex Schneider, the library’s director, noted it also is a home to a visitor center stocked with brochures, maps and other materials about various places in West Virginia. Schneider said she’s looking to revitalize the center and recruit new volunteers for it.

Joelle DeVore, office manager for Brooke Hills Park, noted the recent return to the park of the Brooke County Fair, adding it wouldn’t have occurred if not for the hard work of many volunteers.

DeVore said there are plans to restore a 180-year-old former toll house at the park using whatever original pieces may be salvaged after it collapsed during a severe storm on June 30.

The group also heard from Sarah Cale, executive assistant at the Top of West Virginia Convention and Visitors Bureau, who said after wrapping up a season of free concerts at the Weirton Event Center, the organization is helping to promote the New Cumberland Fall River Fest, to be held Saturday and Sunday, and the Wellsburg Applefest, set for Oct. 1-3.

She was accompanied by Nancy Wright and Joyce Beatty, who are among members of the Hancock County Arts Council, which operates the Summit Art Gallery.

Beatty noted the gallery recently moved inside the Top of West Virginia CVB’s new office at 3539 Main St., which offers more space in which to display the works of many local artists.

Wright said the gallery will hold an art show featuring the work of Brooke County and Hancock County middle school pupils beginning Oct. 7 and continuing for several weeks and there also will be a show with art by high school students from the two counties in November.

Wright added the Art Hop will return Nov. 13. Launched in 2019 but sidelined by COVID-19 last year, the event included displays of artwork at Summit, Martha’s Gallery, an art gallery operated by Neely and Sanford in Wellsburg; and several other sites.

Michael Biela, marketing assistant for the Wheeling Visitors Center, said the Capitol Theatre will reopen with a variety of shows, including A Special Wish Lip Snyc Challenge on Oct. 2, an Eagles tribute band on Oct. 15 and the 19th Rock Roll and Doo Wop concert on Oct. 30.

He added nearby WesBanco Arena will present professional bull riding events Oct. 8 and 9.

Herb Faulkenberry, vice president of sales marketing at Oglebay Resort and Conference Center, said Oglebayfest will be returning on the first weekend in October as well as Boo at the Zoo, which will continue each weekend in October.

Faulkenberry said there are plans to offer evening dinner theaters during this year’s Festival of Lights, which will be kicked off with a ceremonial lighting on Nov. 9.

The group also heard from Nila Chaddock of the Marshall County Historical Society, who said the West Virginia Penitentiary and Grave Creek Mound Historical Site have reopened to much acclaim; and Kara Gordon, manager of the Cockayne Farmstead, an 1850s farmhouse in Glen Dale.

Gordon said Scarecrow Lane, a festival featuring scarecrows decorated by various businesses and groups, will return Oct. 16 and 31 and rooms in the house will be decorated in various periods at Christmas.

Barbara Ballint, executive director of Belmont County Tourism, said rural tourism became very big last year because of the pandemic, which boosted participation in its Geo Tour, in which participants seek 35 geocaches placed at various sites in the county; and Rubberneck Tour, which she said started as a farm tour but has expanded to include other sites.

Ballint added the Barnesville Pumpkin Festival, in its 57th year, kicks off today.

The group also heard from Monroe County Commissioner Mick Schumacher, who reported on outdoor concerts held last year to raise funds for the restoration of a local theater.

He noted since the group was formed in 2012, it has grown to include more than a dozen organizations from the Tri-State Area, adding it could expand further.

He and others said such groups can work together to draw many visitors to the Ohio Valley by sharing ideas and spreading word of their events and activities.

Wellsburg Mayor Daniel Dudley said, “We want the city, Wellsburg Chamber (of Commerce) and all organizations to work together to bring about change.”

Chamber President Luke Diserio said the key to such groups’ success is recruiting others with fresh perspectives.

“It’s important to draw new blood to spark interest in tourism,” he said, adding when that occurs, “It’s awesome to see, and we need more of it.”