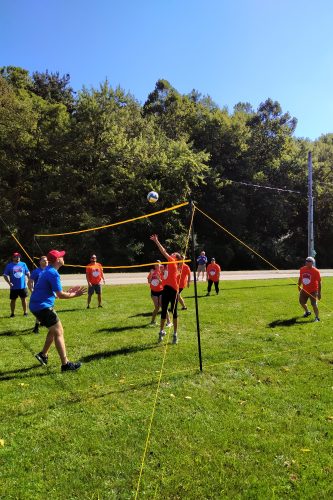 HAVING FUN, HELPING OTHERS — Members of the Ohio Oil and Gas Association play volleyball Friday during the association’s third annual charity game. This year, the “Volley for the Valley” game was held at Sally Buffalo Park in Cadiz and helped raise more than $10,000 for the Mid-Ohio Food Bank. -- Contributed

CADIZ — The Ohio Oil and Gas Association raised more than $10,000 for the Mid-Ohio Food Bank during its annual charity game event.

For the past few years the association has held a charity event around the Ohio Valley to benefit various organizations. This year, the event “Volley for the Valley,” was a volleyball match held Friday at Sally Buffalo Park in Cadiz. In 2019, a softball game was held in Belmont County, while last year a kickball game was held in Jefferson County.

Mike Chadsey, director of public relations for the Ohio Oil and Gas Association, said members have raised more than $50,000 for local charities since beginning the annual event. The money has previously aided the Foundation of Appalachia for its book program and local county emergency management agencies to help fight COVID-19. This year the funds will be donated to the Mid-Ohio Food Bank to help combat food insecurity in local pantries.

“This was our third-annual game. We know our company and members have assets in different counties, so we move it around. Everyone likes to play different games so we switch it up each year. The game is really just a mechanism to help raise the funds for the charities, and we have fun while doing it,” he said.

Chadsey said they raised more than $10,000 during this year’s event, with the association covering all expenses. He said money raised during the event will go straight to Mid-Ohio Food Bank.

Chadsey said the event is another way the organization gives back to local communities.

“We are so very proud of our membership who year in and year out commit not only their time and talent but their treasure to be part of the communities we operate in, and today’s (Friday’s) outpouring of donations and effort is another great example of that mission,”‘ he said.