Tickets on sale for Sept. 19 cultural experience at Le Chateau Pier in Smithfield 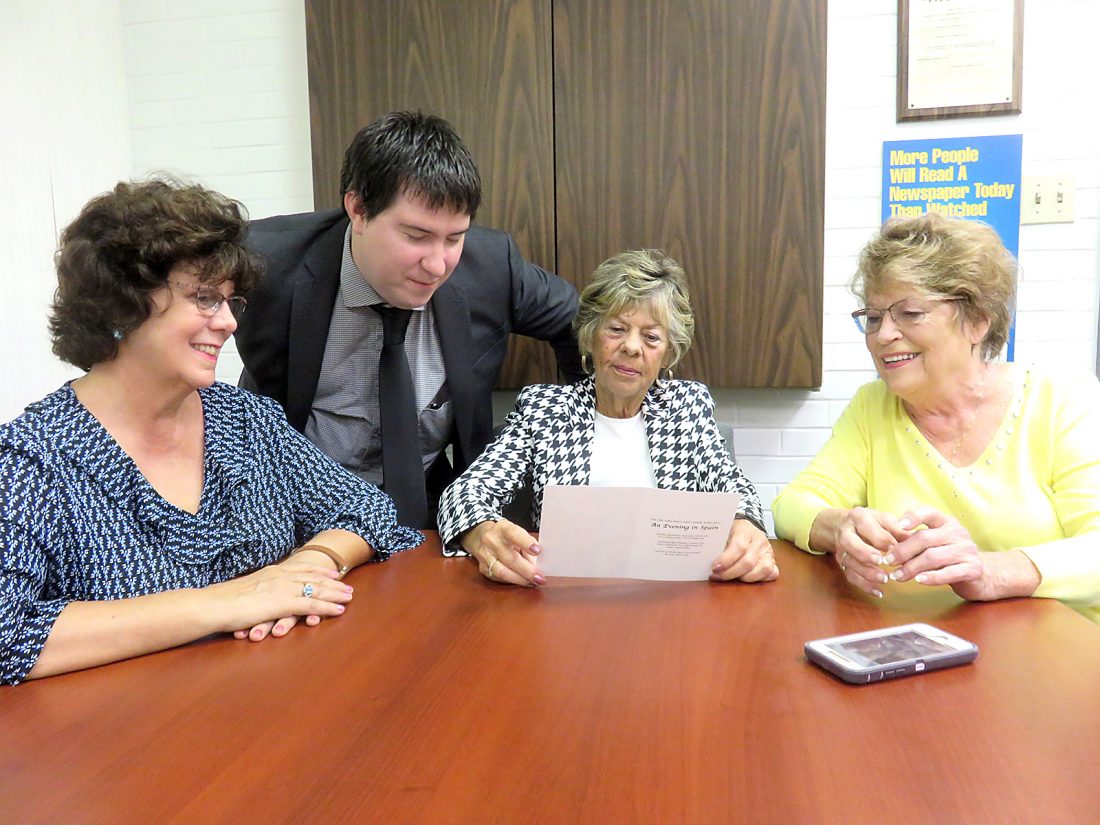 EVENT PLANNERS — The Ohio Valley Music Guild is organizing “An Evening in Spain” for Sept. 19, beginning at 4 p.m. in the grand ballroom at Le Chateau Pier Bed and Breakfast and Event Center at 195 state Route 151, Smithfield. It will feature Alba Flamenca, a music and dance ensemble from Pittsburgh and a tapas buffet. There will be a full bar. Tickets are $50 per person with Sept. 14 the deadline for reservations. Looking over plans for the guild’s first in-person event since November 2019 are, from left, Roxanne Matysiak, board member; Matthew Gallabrese, treasurer; Joyce Orlando, program chair; and Judi Gaynor, past president. -- Janice Kiaski

SMITHFIELD — The Ohio Valley Music Guild is eager to pick up where it left off with in-person events that offer a variety of cultural experiences for area residents.

That effort resumes with a performance locally that will transport audience members abroad through “An Evening in Spain,” featuring Alba Flamenca, a music and dance ensemble from Pittsburgh.

The show will be held Sept. 19 beginning at 4 p.m. at a first-time venue for the guild – in the grand ballroom of Le Chateau Pier Bed and Breakfast and Event Center. It is located at 195 state Route 151, Smithfield, and owned and operated by Todd and Tina Piergallini.

Tickets are $50 per person and include a tapas buffet. There will be a full bar. The deadline for reservations is Sept. 14. There will be valet parking.

“We’re getting back on track — yes, definitely,” commented Joyce Orlando, program chair, of the guild’s mission to bring “quality, cultural music to local audiences at an affordable price.”

The one-hour show will feature dancers and musicians.

Since its establishment in 2010, Alba Flamenca has performed in venues around Western Pennsylvania, including the Kelly Strayhorn Theater, Three Rivers Arts Festival, Hazlett Theater, Pittsburgh Center for the Arts, Albright-Knox Art Gallery, Carnegie International Institute and numerous music festivals, universities, museums and private events. Formed by a core of professional musicians and dancers, its mission is to bring flamenco music and culture to audiences in the area. Carolina Loyola-Garcia and Jon Banuelos are founding members, joined by Jeff Berman, Lynn Speakman, Guillermo Rodriguez, Maria Nunez and advanced students from Flamenco Pittsburgh.

Principals in the group include:

≤ Carolina Loyola-Garcia is a professional stage artist as well as a filmmaker. She has been featured with Quantum Theatre in the production of “The Red Shoes, Maria de Buenos Aires, Ainadamar, Mnemonic, and Looking for Violeta;” with Attack Theater in the production of “The Ruby Goldberg Variations;” with the Renaissance Winds and Mark Thompson’s Co.; with the Pittsburgh Symphony Orchestra’s Fidlesticks Family Concerts; and has led Alba Flamenca since 2010. She has studied flamenco in Spain under Carmela Greco, Angel Atienza, La Tati, La Lupi, Rafael Campallo and among others. She is director of Flamenco Pittsburgh Dance School, founding member of the Uptown Quartet, and she is professor of cinema at Robert Morris University. In 2013 she premiered her feature length documentary “Sobre las Olas: A story of flamenco in the U.S.”

– Jon Banuelos is a Flamenco guitarist, composer and songwriter living and performing in Pittsburgh. He started his musical studies in Tucson, Ariz., under Ismael Barajas where he played in the Ismael Barajas Latin Jazz band. He then went on to study at the American Institute of Guitar in New York City followed by three years in Jerez de La Frontera, Spain, studying and performing Flamenco guitar with master guitarists, dancers and singers. Banuelos has been performing in the Pittsburgh area for the past 11 years with ensembles such as Alba Flamenca and world music ensemble Alma Mura, which specializes in music from Latin America, Croatia and Portugal. He composes original music combining these experiences acquired through the years, including his EP “Creosote and Beer” released on March 16, 2019.

– Jeff Berman is a multi-instrumentalist, improvising artist and composer whose work reflects his global musical vision. A native of New York City who now lives in Pittsburgh, he has developed a genre-extending concept on mountain dulcimer, vibraphone and percussion that has allowed him to collaborate across stylistic boundaries with a diverse group of artists from across the globe.

He has performed internationally as a solo artist and as a member of various ensembles. Some of the artists he has performed, recorded and toured with include Andy Statman, Tony Trischka, Robert Een, Susan Mckeown, Lindsey Horner, Osei Koranke, Paul Bley, Linda Thompson and choreographers Yin Mei and Gia Cacalano. He has three recordings on the Palmetto Records label featuring his own compositions, and his music has been used for performance, dance, theater and film — including the Academy Award nominated documentary “In Our Water.” Berman has performed with Alba Flamenca and the Uptown Quartet since 2019.

Nunez lives in Pittsburgh, performing with Alba Flamenca, where she has taken classes with Fanny Ara and Alice Blumenfeld. She was awarded second place in the Flamenco Vivo Carlota Santana International Contest 2016 in New York City.

Orlando expressed enthusiasm for the upcoming performance at a different venue and the departure from a 2020 that was anything but normal, given COVID-19.

“We’ve wanted to do an event at Le Chateau Pier, and we were planning one (there) but then the pandemic hit,” noted Orlando, happy that the guild is moving ahead.

“It was just a decision that we knew we had to get back on the calendar, and the board said let’s give it a try,” Orlando said, describing Le Chateau Pier as “a beautiful venue.”

Matthew Gallabrese, the guild’s treasurer who is serving on the committee planning “An Evening in Spain,” said the guild hasn’t had an in-person event since its November 2019 annual dinner meeting. That featured a sit-down dinner at the Steubenville Country Club and a performance by youth who had participated in and excelled in the Valley’s Got Talent competition orchestrated by Bobbyjon Bauman’s of the Sycamore Youth Center and Ohio Valley Youth Network.

It also included the award of the guild’s annual $1,000 scholarship, which was presented to Glory Dami.

A virtual performance in 2020 helped raised some funds for the guild and kept the organization’s name out there, according to Gallabrese, who explained the performance was a special one given by songstress Ashley Marina Yankello, a singer-songwriter from Pittsburgh who had performed at the Valley’s Got Talent. In 2020, the teen appeared on NBC’s “America’s Got Talent.”

“We were trying to do something to keep our name out in the open and make sure people knew we were still around,” he said. It also was occasion for announcing the recipient of the 2020 $1,000 scholarship, given to Mollie Vonderhaar of Xavier University.

Each year the guild awards a $1,000 scholarship to sophomores and above college students who have a local connection and who have declared to be a music-related.

It also has been a faithful annual contributor of $1,000 to the Grand Theater Restoration Project.

“Even though we didn’t meet and raise any money, we still gave the Grand Theater a $1,000 donation, and we still did our scholarship because that’s really the purpose other than bringing cultural events is to support the arts program and to present a scholarship.”

Roxanne Matysiak, a board member, attended her first guild at the invitation of a friend and was impressed by a string quartet performance. Soon after, she became a supportive member.

“I was unaware that this group brought people in, but the guild brings in some very talented people from out of the area, and it shouldn’t be a secret,” she said.

The guild’s Facebook page puts its history in perspective, noting, “In 2003, a group of musically minded people in Steubenville brought in a New York City impresario with local connections to produce and stage ‘Madame Butterfly,’ an opera by Puccini. The audience at Steubenville High School loved it. The next year (2004) they staged an equally wonderful opera, ‘LaBoheme’ also by Puccini featuring an extraordinary lead tenor from the Colon opera in Brazil.

“Based on early efforts, a committee was then formed in November 2004, a president was elected and commitments were made to develop an opera guild. Their goals were to bring opera and good music to the Upper Ohio Valley area by raising funds to support the arts through membership drives, grant requests, donation solicitations and fund-raising events.

“From a handful of music devotees at our first meeting in November 2004 we have since grown to more than 100 members with more members being added on a regular basis.”

The nonprofit altered its name later to clarify that its programs weren’t limited to opera.

The guild has brought more than 50 performances to the Ohio Valley through the years, some of them being Act II of the Nutcracker Ballet by the Pittsburgh Ballet performers; a swing band performance with dance instructors; opera, Broadway and jazz singers and ensembles; and a steel drum orchestra.

“We are always looking for new members. Anyone can be a member,” Gallabrese said. The annual membership fee starts at $20 with other donor membership levels are available.

For the first time, a membership or sponsorship can be obtained online by visiting https://ovmusicguild.square.site/. Those interested also may visit the guild’s website (https://ohiovalleymusicguild.com/) or send a check to Ohio Valley Music Guild, P.O. Box 2158, Wintersville, OH 43953.

Ross Gallabrese is acting president of the guild, and Toni Dondzila is secretary.