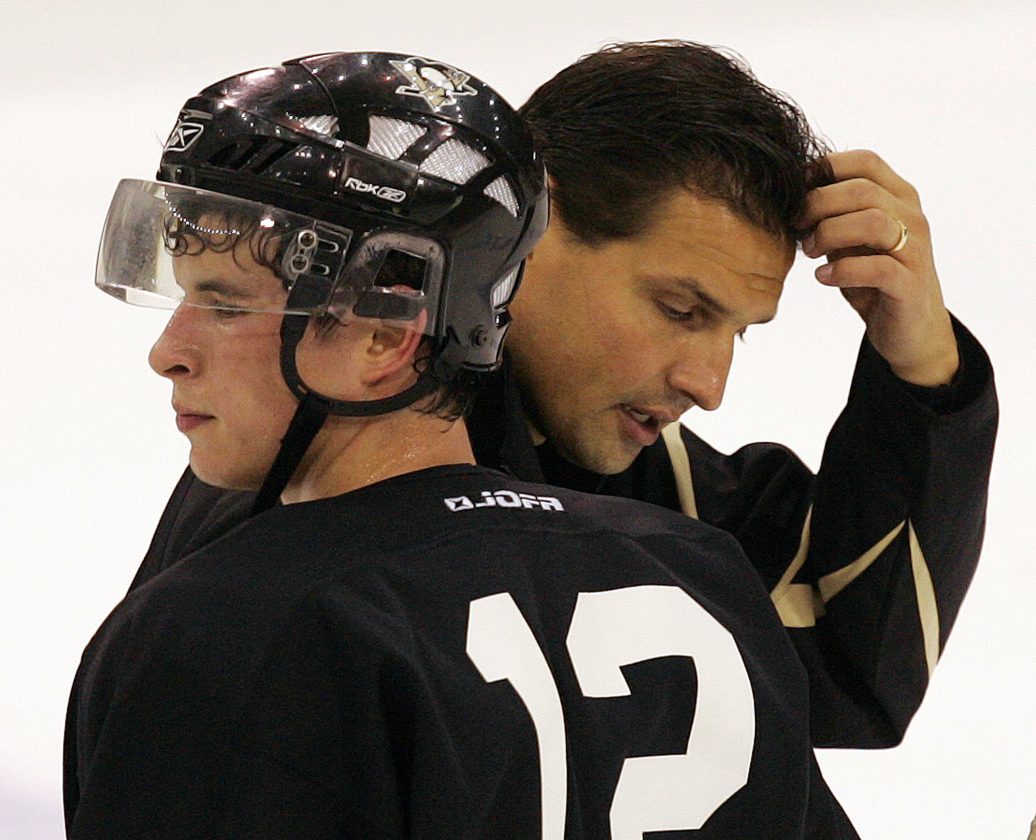 COACHING — Eddie Olczyk, then the head coach of the Penguins, skates behind first-round pick Sidney Crosby during the first day of practice on Sept. 14, 2005, in Pittsburgh. -- Associated Press

STEUBENVILLE — Area residents who attend Wednesday’s presentation by Eddie Olczyk will have the chance to hear a thought-provoking discussion.

“I think for anybody who enjoys storytelling, hopefully, I can inspire or help somebody get through a tough time that they are going through,” said Olczyk during a recent interview.

When Olczyk steps onto the stage at 7:30 p.m. in the Steubenville High School auditorium as part of the Herald-Star Speaker Series, Presented by Eastern Gateway Community College, he will be sharing an interesting story.

“I’ve been very fortunate to have been a lot of places,” Olczyk said. “I played in the Olympics as a 17-year-old, played 16 years in the National Hockey League, became an elite analyst in the NHL and was diagnosed with Stage 3 colon cancer in 2017.”

The 55-year-old Olczyk was drafted by his hometown Chicago Blackhawks in the first round of the 1984 draft. He was the third overall selection draft, which came just a few months after he played with the U.S. Olympic hockey team in the Sarajevo games. That team, which played four years after the 1980 team that won the gold medal, finished with a 1-2-2 record in pool play and did not advance to the medal round.

While his Olympic experience was not as memorable as the one created by the Miracle on Ice team, Olczyk said that 1980 squad set the stage for growth of hockey in the United States.

“That 1980 team really opened the door for all of us as far as American-born hockey players getting into the NHL,” he explained. “That really put us on the map, and I happened to be in the next wave. I was still a young kid when that happened. I was 12 turning 13 when I watched that Miracle on Ice team.

“I thought, wow, how great would that be to be a part of that when I was older, you know, about 24 or 25,” he continued. “But four years later, I’m playing in the Olympics in Sarajevo.”

That team, with a 4-3 win over the Russians in the semifinals and a 4-2 win over Finland to clinch the gold medal, opened a lot of eyes in professional hockey.

“We — American-born hockey players — owe a great debt of gratitude to that 1980 Olympic team because that opened up the doors to the NHL. They were saying ‘Wow, there are some pretty good American-born players. They certainly can play in the best league in the world.’

“When you look at the percentage of the American-born players who were in the NHL prior to 1980, and then look at what happened 10 years later, into the 2000s and now in the 2020s — that number has dramatically improved over time. I was just coming in what that door opened, and I tried to carry that mantle for as long as I did in the NHL.”

Olczyk’s career in the NHL included playing in Toronto, Winnipeg, the New York Rangers, Los Angeles Kings and with the Penguins. he scored 342 goals and had 794 points while playing in 1,031 games. He was head coach of the Penguins in the 2003-04 season, through the 2004-05 season that was canceled and for the first 31 games of the 2005-06 season before he was replaced behind the bench. Olczyk has served as a radio and TV commentator with the Penguins and Blackhawks and the NHL on NBC. He will be the lead commentator for NHL games on Turner Sports this fall.

He said that Mike Eruzione and Ken Morrow, two players from that 1980 Olympic team who were part of the Baron Club Dinner at the Franciscan University of Steubenville on Aug. 15, helped lead the way for American players.

“It’s hard to believe that’s been 41 years ago,” Olczyk said. “Mike choose not to pursue an NHL career and Kenny wins the gold medal and goes on to win four-straight Stanley Cups with the New York Islanders.

They were two outstanding American-born hockey players and two great ambassadors for the game of hockey in our country.

“That team opened the door for us, and for that we will be forever grateful for that team and what they were able to accomplish. To get that respect — that was the one thing — get the respect and earn the respect of the American hockey people.”

In his book that he wrote with Perry Lefko, “Beating the Odds in Hockey and in Life,” Olczyk details his fight against Stage 3 colon cancer, and how it has changed his life, the lives of everyone around him and many other lives. That battle began in August 2017 when the cancer was discovered, and included surgery and chemotherapy before he was declared free of the disease in March 2018.

“I think that’s why I became very public what I was battling and tried to be as transparent as I could,” he added.

He remains willing to discuss his journey, and is trying to get his message to as many people as possible.

Even though it’s been more than three years since he defeated his cancer, Olczyk said each story comes with a powerful message.

“I think the one thing I wish I would have known about prior to writing the book was that there is a real survivor’s guilt that I have gone through and other cancer survivors go through when either the people you come in contact with, people you work with or people you know have passed because of the disease,” he said. ”

That is something that is very real. Some people are able to handle it, some people have a difficult time. I’m still learning, I’m trying to navigate or, to use a hockey term, stickhandle my way through survivor’s guilt of being lucky and of having great support and having a great team of doctors.”

It’s a message he will be sharing in Steubenville.

“If I can make a difference in the life of one person who attends, then it was worth my time and effort for everybody to come together,’ he said.

General admission tickets for the presentation cost $25 and are available at the Herald-Star office, 401 Herald Square, Steubenville, and at the Times Leader, 200 S. Fourth St., in Martins Ferry, during regular business hours. Tickets also are available at heraldstaronline.com and weirtondailytimesonline.com.

Masks will be strongly recommended for all those who attend the presentation.

A preferred ticket package is available for $50. It includes a copy of Olczyk’s book, “Beating the Odds in Hockey and in Life,” which he wrote with Perry Lefko. and the opportunity to be among the first people to meet Olczyk after the presentation.

A VIP package is available, and includes admission to a private reception that will be held from 5 p.m. to 6:30 p.m. at Froehlich’s Classic Corner; a selection of beer, wine and hors d’oeuvres; the opportunity to meet Olczyk and have a photo taken with him; a copy of the book “Beating the Odds;” transportation between Froehlich’s and the high school; and preferred seating for the presentation. The price is $150 for a couple and $85 for a single ticket.

Copies of Olczyk’s book are available for purchase at the Herald-Star. Contact Brown for details. A portion of the proceeds from the sale of the book as well as money generated from a basket auction prior to the presentation will go to local cancer centers.

STEUBENVILLE — A woman is dead and a suspect is in custody following a shooting on Darlington Avenue Thursday ...

MIDWAY, Pa. — A Smith Township man was arrested and charged with homicide after he fatally shot his neighbor ...