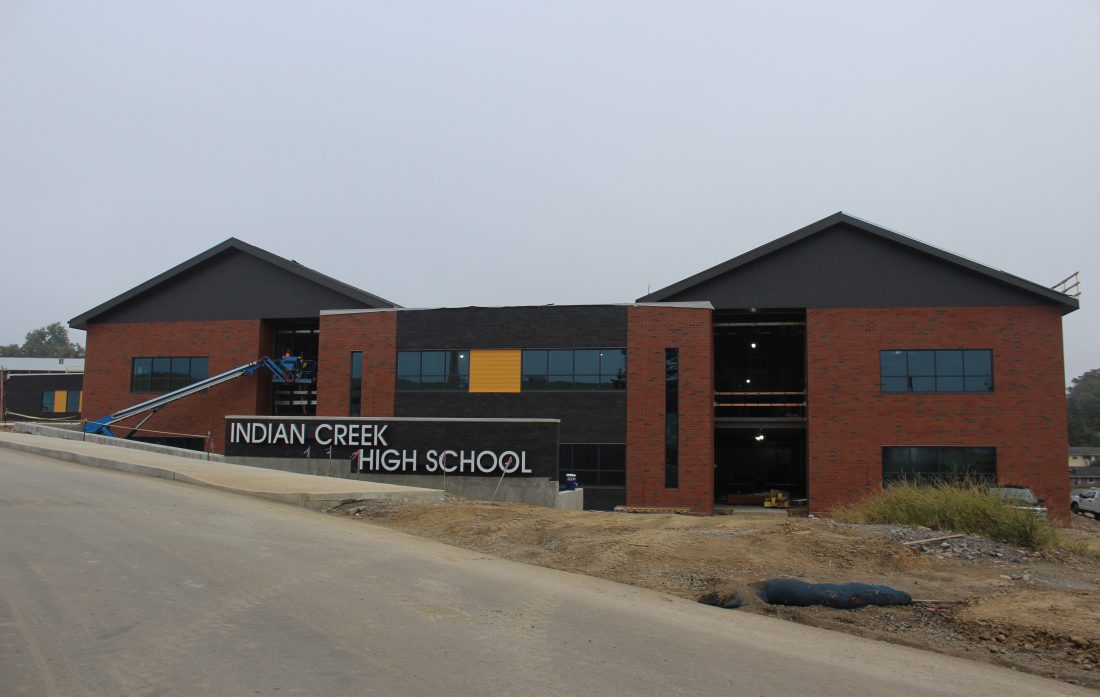 ON SCHEDULE — Crews continue work on the new Indian Creek High School which will open on the current Wintersville campus early next year. Officials said plans were on target for the two-story facility, which will boast modern classrooms, updated technology and safety features and other amenities including a competition gymnasium and 700-seat auditorium. -- Contributed

WINTERSVILLE — Construction is on target for the new Indian Creek High School and officials are keen to see it open this spring.

“Weather permitting, paving will occur around the north and west sides of the building and landscaping on the north side is progressing,” he added. “On the interior, they are hanging drywall and painting.”

Belt continued that plans were still on schedule for the school board to occupy space in the new structure in February with the remainder to be in use this March. For now, the district office temporarily housed at the former Wintersville Elementary School only a stone’s throw away.

Costs for constructing the new high school and Cross Creek Elementary, as well as renovations at Hills Elementary in Mingo Junction, are covered through the 6.1-mill bond issue local voters passed in 2018, which provides $45 million toward the projects with another $18 million given through the Ohio Facilities Construction Commission. Sol Harris/Day Architects of North Canton and Hammond Construction Inc. of Canton are and designers and project manager, respectively.

When completed, the new ICHS will include a two-story facility at the current campus on Park Avenue in Wintersville. The spacious structure is being built on the previous multipurpose field next to Kettlewell Memorial Stadium and incorporates classrooms with collaboration areas for a more modern look plus a competition gymnasium, an estimated 700-seat auditorium, cafeteria/commons area, café-style library and band room with locker room facilities available for gym classes and sporting events.

Science and math classrooms will be located on the lower level with the social studies and English classrooms on the upper floor. All of the areas include secure doors, plus the site features a special tiered seating area for classes and presentations. Entry would be accessed through the southeast corner with the main office able to view any visitors coming onto the site and a secure vestibule for added safety.

Meanwhile, the district office will be housed at the building with its own separate entry and school colors will be depicted through the use of red brick and gold metal. Additionally, the present band room would be converted into a multipurpose building and the older high school structure would remain in operation throughout the construction phase but would later be demolished.

STEUBENVILLE — A woman is dead and a suspect is in custody following a shooting on Darlington Avenue Thursday ...

MIDWAY, Pa. — A Smith Township man was arrested and charged with homicide after he fatally shot his neighbor ...