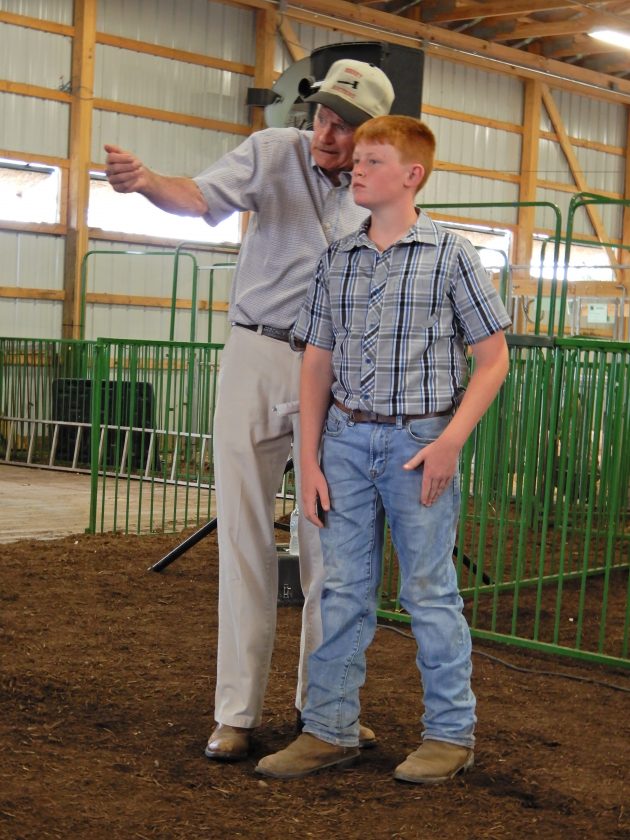 TEACHING MOMENT — John Birney points out to Jacob Birney how to get to the bidder who bought his animal during this year’s sale at the Harrison County Fair to shake his hand and offer thanks. (Esther McCoy)

CADIZ — Each time a resounding noise would come from the Birney Memorial Livestock Arena during the Harrison County Junior Fair livestock sale on June 26, everyone could be sure the sound was coming from the ring man, John Birney.

His acclamation that another bidder had been found always was loud and clear. Actually, the Jewett farmer has been gathering bids for the 4-H and FFA youth for many years. He can be found at the Harrison, Jefferson and Coshocton county fairs each year, along with his son, Steve, who’s an auctioneer and ring man.

This year’s junior fair sale was shortened in time with only the grand and reserve animals and poultry brought in for the sale and the buyer picture spots. The rest of the event ran smoothly along with the animal owner standing in front of the audience. But in 2019, both Birneys spent the entire 11¢ hours in the heat, cooled only by a large fan.

John Birney said among the obstacles he faces is when someone is fanning themselves because of the heat and he takes it as a bid.

“That is confusing when a lifted hand makes a move. Your mind tells you that it is a bid and it isn’t,” he said with a big grin.

It seems that John is always smiling, except when the bidding gets really serious over a grand or reserve prized animal.

“You want to get the best money for the one who has worked so hard to raise it to be a winner,” he said.

“When I was a kid, I would go up into the stands at fair auctions and marvel at the old men sitting there and watching the bidders. Now when I go up high into the stands to watch, I am just one of the older men,” he said.

Birney goes to Carrollton auctions at times on Mondays to watch them take the bids, stating the ring man and the auctioneer have to work together. He was a member of the Germano Community 4-H Club, where Wayne Caldwell and Lauren Myers as advisers at first. As time went on, Juanita Caldwell took over and now it is Doug and Ronnie Caldwell at the helm.

Another event that John Birney has been the ringman for is the fair baked goods auction, which wasn’t held this year as a result of the COVID-19 virus. Steve, the younger Birney, mostly serves as the auctioneer for that sale and he can come up with some funny quips that break the tension and leave bidders laughing.

Steve Birney went to Louisville, Ky., at the Missouri Auction School to learn auctioneering in the early 2000s and has been adding his voice to the 4-H auctions as well.

“I had been messing around with auction calls since I was a kid. My wife, Missy said, ‘If you are going to do that, you might as well go to auction school.’ So I did. I was an apprentice with Bill Host for a year and then I was on my own on the auction block,” he said.

Steve and Missy’s two daughters received grand champion livestock all through 4-H, something he never attained in his years with the New Rumley 4-H Club. But he received something just as important to the Birney family, getting the trophy for the best rate of gain steer. He also raised raising lambs and hogs.

Steve is among the family members who help their father, John, in put in the hay and other crops.