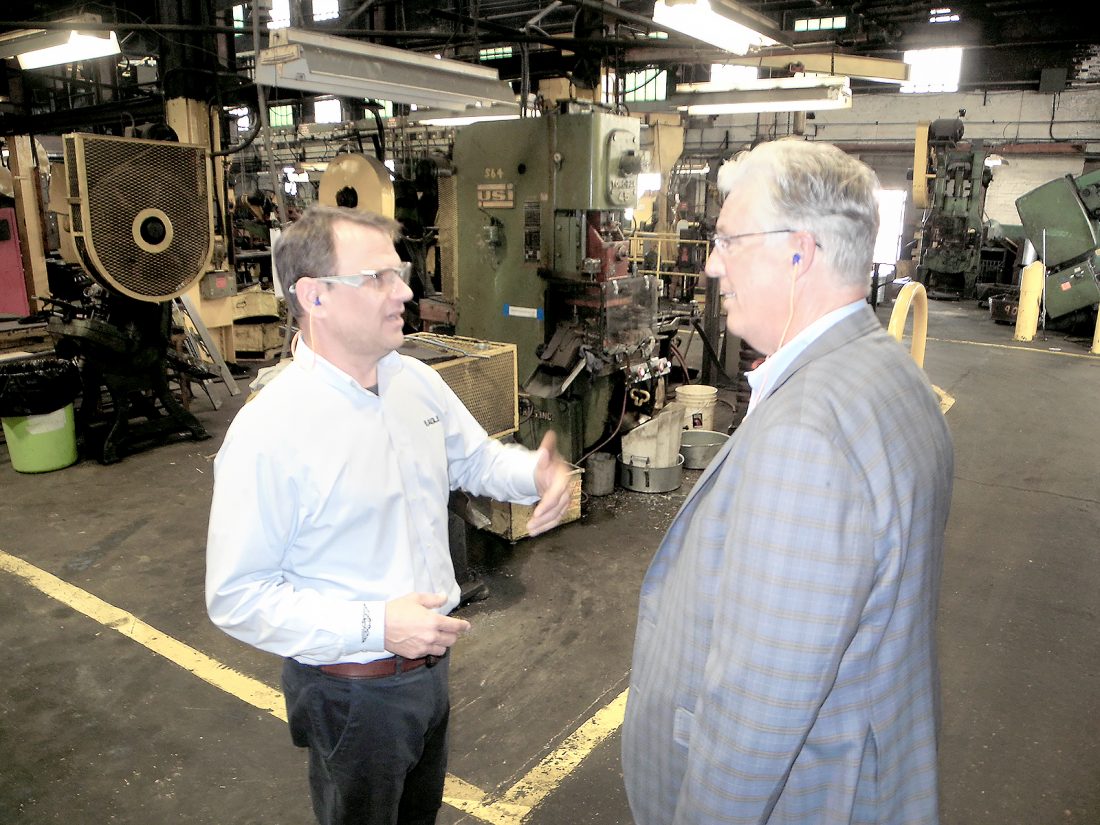 WELLSBURG — Woody Thrasher, a Republican candidate for West Virginia, discussed ways to improve the state’s infrastructure and conditions for existing and prospective businesses during a visit Thursday to Eagle Manufacturing on Thursday.

The visit to the Wellsburg business, Wheeling-Nippon (formerly Wheeling-Nisshin) of Follansbee, and other area businesses came following the West Virginia Manufacturers Association’s endorsement of Thrasher, one of seven Republican candidates for governor in Tuesday’s primary election.

Thrasher will face incumbent Jim Justice, for whom he served as state secretary of commerce, and five others, including Shelby Jean Fitzhugh of Martinsburg, Michael Folk of Martinsburg, Brooke Lunsford of Salt Rock, Charles R. Sheedy Sr. of Cameron and Doug Six of Burton.

Dave Harvey, vice president of operations for Eagle, was among industry leaders who said the state’s inventory tax and rising energy costs for their manufacturing operations impede or hurt their businesses.

Thrasher said it’s not fair that new businesses often are offered in lieu of tax payments to open facilities in the state, while existing ones must pay the inventory tax.

“It puts them at a distinct disadvantage,” he said, but he acknowledged local officials in the counties where those industries operate are concerned about losing revenue from the tax used for schools and other public services.

“You have to make the counties whole first. You can’t ask 14 or 15 counties to bear the burden of the whole state,” said Thrasher, who noted taxes from counties with industry are being shared with others in the state.

He said if elected, he would explore various ways of removing the tax without hurting local governments, including eliminating it in phases.

Thrasher said with its resources, the state can produce energy very cheaply but excessive regulation prevents its businesses and residents from benefiting from it. He said if elected, he would seek less oversight of natural gas-fired power plants by the state Public Service Commission.

Thrasher was asked what he would do to improve the state’s roads and other infrastructure.

As the owner of Thrasher Engineering, a company involved in water and sewer projects in many areas of the state as well as several others, Thrasher said he drove more than 58,000 miles in West Virginia and hasn’t seen the roads worse than they are in many places.

But more funding isn’t necessarily the answer, he said, adding that regional highway officials have told him better practices and decisions are needed to ensure roads are properly maintained.

“Part of it is efficiency and what you prioritize,” Thrasher said.

He said his top priority in infrastructure will be the expansion of Internet service, saying being without it is a death sentence economically because new businesses won’t go where it’s not available.

Thrasher added Internet access opens opportunities for working at home, establishing home-based businesses and, in rural areas with a shortage of doctors, telemedicine.

A supporter of school choice, Thrasher said he believes administrative cuts could be made to the state Department of Education to make more funding available to local school districts, which he said should have more power to determine their own curriculum based on their region’s economic needs.

“I think there needs to be far more autonomy,” he said.

Thrasher said he believes state government is too large overall, saying it is the fourth highest per capita in the nation though the state’s population has declined, and he would seek to reduce it, primarily through attrition.