Fireworks display will go on in Wellsburg 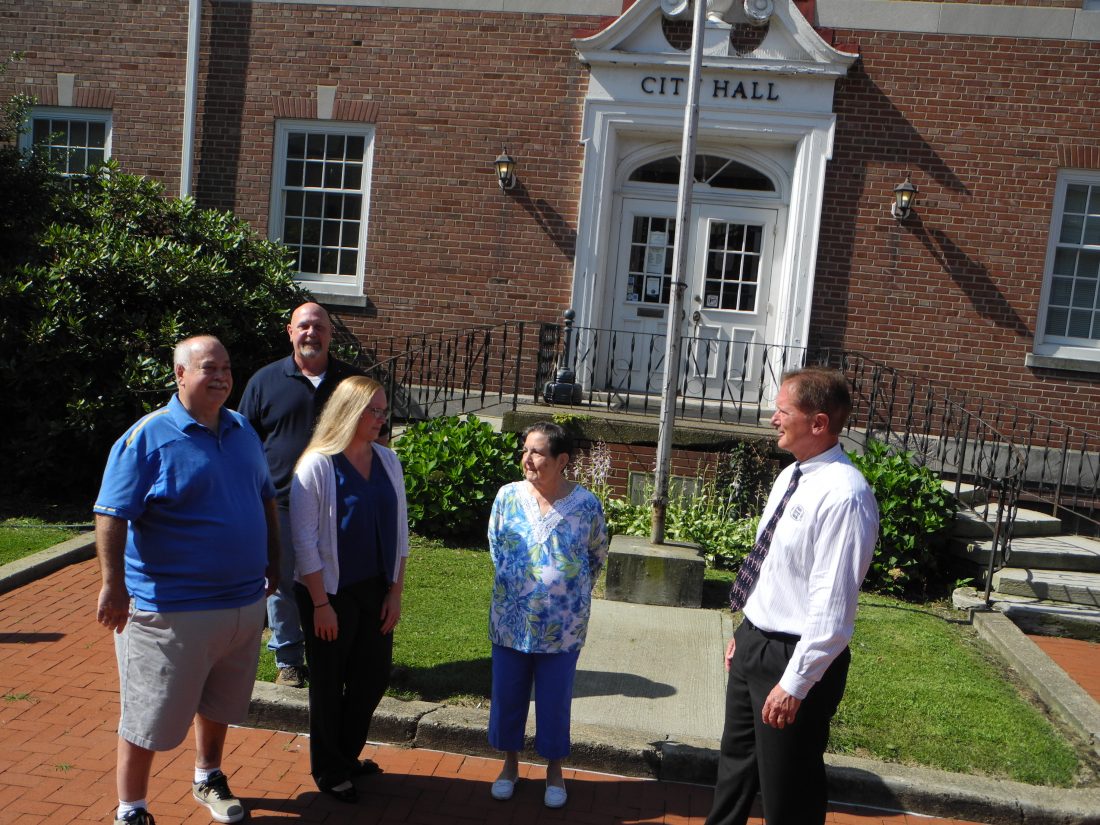 WORKING TOGETHER — Traubert’s Pharmacy and Main Street Bank are sponsoring fireworks to be launched Friday night from the south end of Wellsburg for residents to view from their homes and vehicles. On hand for the announcement Monday on the Wellsburg Town Square were, from left, front, Randy Hood, owner of Traubert’s Pharmacy; Melissa Hood; Mayor Sue Simonetti; and Rich Lucas, president of Main Street Bank; and back, City Manager Steve Maguschak. -- Warren Scott

WELLSBURG — Fireworks will be seen over Wellsburg this weekend after all, thanks to the efforts of two local businesses, while another local holiday event, the Oil Can Derby, will return through the efforts of several volunteers.

On Monday Randy Hood and Melissa Hood of Traubert’s Pharmacy and Rich Lucas of Main Street Bank gathered at the Wellsburg Town Square to announce the businesses will co-sponsor a display to be presented just after dusk Friday.

Randy Hood, the pharmacy’s owner, said he and Lucas, the bank’s president and chief executive officer, had learned of plans to cancel the fireworks that were spurred by concerns about social distancing.

“We didn’t want COVID-19 to take away a tradition that has been a part of Wellsburg for so many years,” he said.

Hood said after the support of city officials was secured, arrangements were made for American Fireworks Co. to provide the fireworks on Friday.

He explained at this late date, the company wasn’t available on Saturday.

But Lucas said it’s fitting that the display will help to kick off a weekend-long celebration of Independence Day.

The Bluefield, W.Va., company has supplied fireworks for the city’s New Year’s Eve celebration and as with it, Friday’s pyrotechnics will be launched from the city’s south end and designed to be viewed from many homes and vehicles in the city.

“It will be aerial only. There will be nothing on the ground, so everyone will be able to watch them from their homes or cars,” said Mayor Sue Simonetti.

“We’re very fortunate to have Randy and Rich step up and sponsor the fireworks,” said Simonetti.

She and City Manager Steve Maguschak noted the city normally contributes to the annual display’s cost, which is supplemented by funds raised by the volunteer Wellsburg 4th of July Committee.

Simonetti said she supports the group’s decision to cancel its weeklong Independence Day celebration, adding events such as free concerts held at Central Park draw too many people to make social distancing possible.

She praised the group for working with area businesses to present a variety of events over the years, a sentiment shared by Lucas.

A Wellsburg native, he recalled “everyone coming home — all of my aunts, uncles and cousins — and picnics at everyone’s homes. Going to the parade and the Oil Can Derby.”

“When you put the two together, it was nonstop family and nonstop community for several days. The town’s always done a wonderful job,” he said.

Traubert’s Pharmacy also will help organizers of the Oil Can Derby by providing free masks and hand sanitizer for those involved.

Spearheaded by Fred Marino and Steve Mitchell, two other local businessmen, the boxcar-style race will be held at 9 a.m. Saturday on Fourth Street.

A weigh-in and practice, mandatory for all new drivers, will be held at 5:30 p.m. Friday.