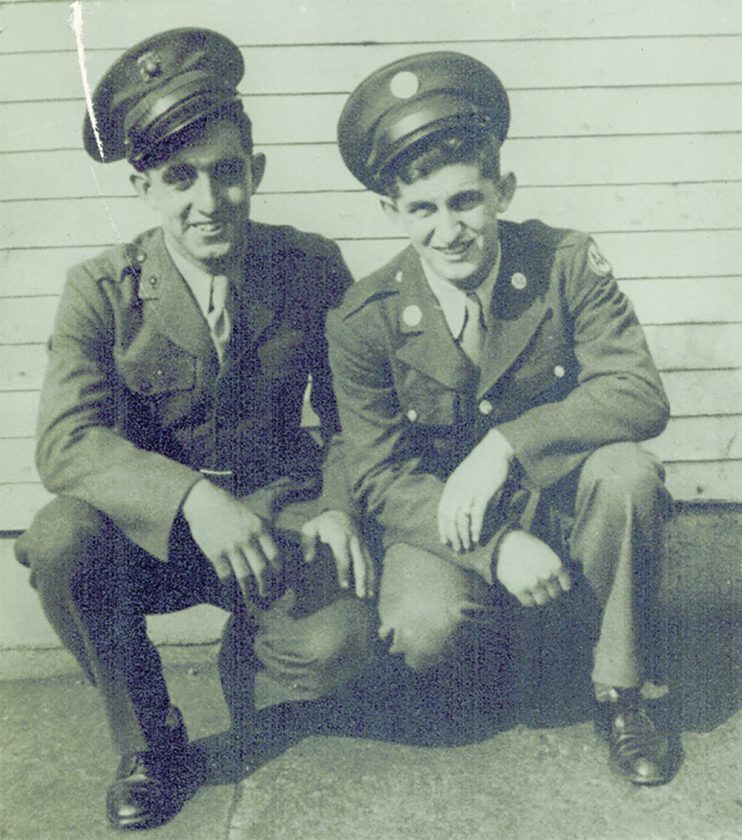 WELLSBURG — Seventy-five years after two of the most decisive battles in both theaters of World War II, a local man still carries the memory of his father and uncle who fought in them.

U.S. Marine Corps Pfc. Manuel P. Markos was among the first day’s casualties at the Battle of Iwo Jima, killed in action on Feb. 19, 1945 — the first of more than 26,000 Americans injured or killed over the five-week battle.

Markos, who died at the age of 20, left Wellsburg High School just before graduating to enlist in the Marine Corps. He was returned home some time later and buried at Greenwood Cemetery in Wheeling, posthumously recognized with numerous awards, including the Purple Heart.

Manuel Markos’ older brother, Army Staff Sgt. Nick P. Markos fought in the European Theater in France, Germany and Austria, with his military career seeing him included at the Battle of the Bulge, where, in total, nearly 91,000 American and British men were killed, wounded or captured. In April 1945, his unit, the 42nd Infantry Division, would be the one to liberate the Dachau concentration camp, the first such camp established by the Nazi regime.

Paul Markos, Nick’s son, said the community of Short Creek saw many of its young men enlist in World War II, according to an acquaintance whose aunt still has clear memories of those years. In a bittersweet turn of events, all of the men who enlisted from the small community returned, except for Manuel.

“One woman that I knew, her … aunt had said that you’d be surprised at the number of men who went in WWII, went to serve their country, just from the little community of Short Creek. … It’s amazing, for such a small community, how many men went into the armed forces.

“There were just so many men who did not hesitate to volunteer, to leave their families, the community they were in. … The woman said my uncle was the only one to have been killed in action.”

The loss of Manuel hit the family hard, Paul said, especially for his mother, who grieved for years afterward.

“My uncle had passed before I was (born) — I only really knew him from the stories from my father and aunts,” Paul Markos said. “It was a tragic loss for the family. My grandmother wouldn’t even let (my aunts) talk about him at home, because she just got so upset. My aunt said that until my brother, the oldest grandchild, was born, my grandmother was just in a depression constantly. Once the grandkids came around, that sort of brought her out.”

Nick Markos was honorably discharged in April 1946 with several awards, less than a year after the end of the war. He would go on to have a long and fruitful life. Upon returning home, Nick began working at his family’s Markos Grocery Store, before becoming a meat cutter, and later in life, the postmaster for Short Creek, a position he held until his retirement in 1990. He later died in July 2002 at the age of 79.

He and his wife, Gert, had three children — Manuel, who would serve in the Vietnam war in the U.S. Navy, and would go on to be a teacher, coach and principal for the Brooke County School System until his retirement; Paul, also a teacher and coach with Brooke County; and Deborah, also a teacher locally and in Indiana before starting her own business.

Paul now hopes to keep the memory and names of his father and uncle alive. To that end, he has been in contact with state Sens. William Ihlenfeld and Ryan Weld, both of whom were happy to help get a pair of bridges in Short Creek dedicated to the Markos’ brothers. While plans have not yet been finalized, Paul said he thinks that the bridges might bear their names by the end of the summer — COVID-19 notwithstanding, as the pandemic has likely caused delays in the process.

The recently renovated bridge over W.Va. 2 near Stone Shannon Road is tentatively planned to bear Manuel P. Markos’ name, while a nearby bridge on Short Creek Road near the post office — where Nick worked for years — will be dedicated to the elder brother.