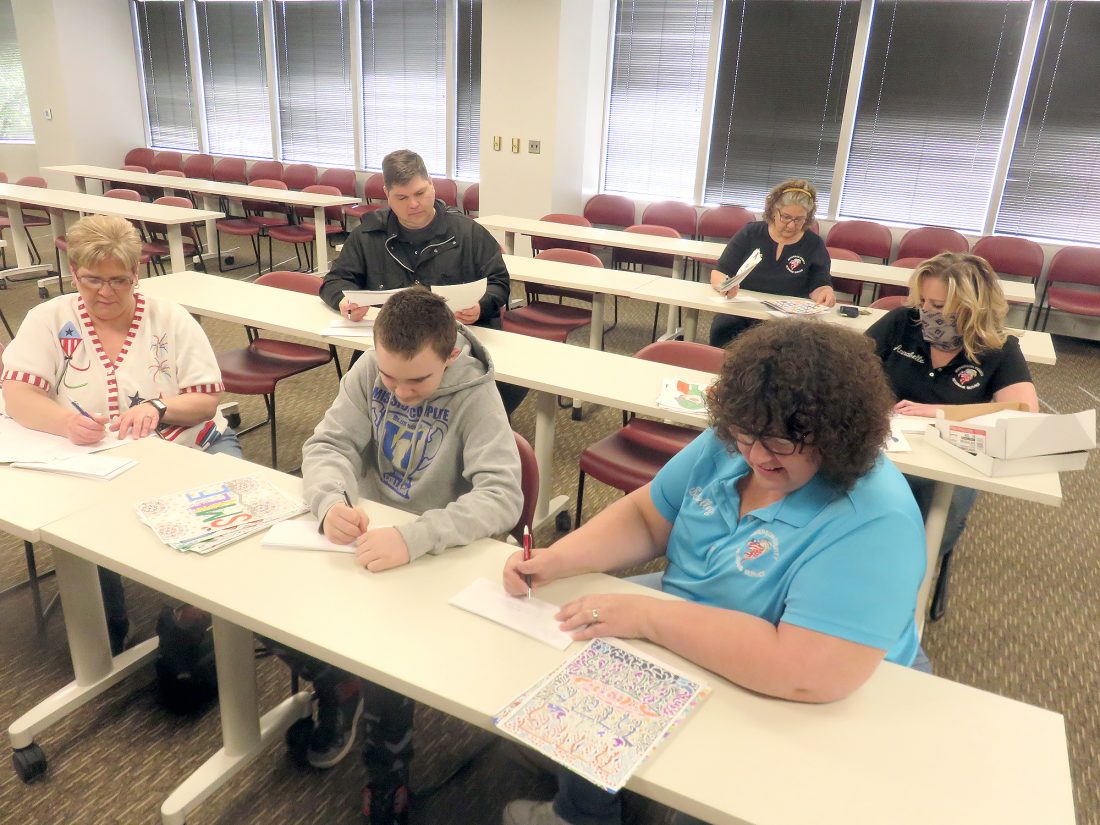 THANK YOU — As a Memorial Day project, 11 members of the Weirton-based Tri-State Young Marines wrote 183 letters and cards of appreciation to be given to veterans at nursing homes throughout Jefferson County, asking the Jefferson County Veterans Service Commission for assistance in getting the cards to veterans. Looking over some of the cards are, front, from left, Wendy Barr, the Young Marines’ assistant adjutant, and her son, Richard Barr Jr., one of the participants; and Schelley Brooks, commission executive director and service officer; and back, commission representatives Shawn Glasure, Jo Ann Giralico and Annabelle Clutter. -- Janice Kiaski

The precautionary response to the coronavirus pandemic has extended into what’s embraced as the official kickoff to the summer season.

And as such it’s impacting the day set aside to remember and revere the men and women who died while serving in the U.S. military.

But it doesn’t have to.

Even though there’s a diminished presence of ceremonies for area residents to attend Monday, there are still ways to observe the day and honor veterans.

“Memorial Day 2020 will be different, but honoring our veterans who have made the supreme sacrifice shouldn’t suffer,” points out Dan Wilson, commander of local AMVETS Post 275. AMVETS is an abbreviation for American veterans. Its members are active duty and honorably discharged veterans from all branches of service.

Wilson offered several suggestions on how to mark the holiday, including:

¯ “First and foremost, if you have a flag, make sure you fly it on Memorial Day, half staff in the morning, then bring it to full staff after noon;

¯ “Take a family walk through a local cemetery, reflect on the flags that have been carefully placed on the graves. Give thanks, it is real.

¯ “Think of those veterans you may have known who made the supreme sacrifice, give thanks for their courage and say a prayer for their family. It matters!

¯ “Think of those in your family who served and have passed, honor them by telling their story to the next generation — ‘They are not dead who live in the hearts they leave behind.’ Tuscarora Native American Proverb #Truth.”

For those who can’t get out, Wilson provided some alternatives that include:

¯ Join the National Veterans Memorial and Museum on Facebook Monday at 10 a.m.;

¯ “Honor a veteran in your life who has passed by telling their story to the National Veterans Memorial and Museum now through May 31 at https://pages.wordfly.com/nvmm/pages/Memorial-Day-Remembrance/” and

¯ “This Memorial Day, remember to ‘Honor the Fallen Go Silent this Memorial Day’ at 3 p.m. local time with Iraq and Afghanistan Veterans of America https://iava.org/memorial-day/.”

Another alternative is writing a note of gratitude to families of veterans who were killed while serving. They are known as Gold Star Families. “We do have several Gold Star mothers and wives in the area,” Wilson added.

The suggestions are but a sampling of ways to say thank-you, according to Wilson.

“There are endless ways, and I would urge citizens to do that ‘thing’ that helps them personally remember those men and women and the freedoms their sacrifice guaranteed for all of us today,” he said.

“Yes, we may not be able to safely conduct our traditional programs of remembrance in groups; however, we as Americans living on Memorial Day 2020 owe them and U.S. history to do our part and honor our nation’s heroes who made the ultimate sacrifice, even if it means at a distance,” Wilson added.

Eleven members of the Weirton-based Tri-State Young Marines, meanwhile, participated in a letter-to-veterans campaign, working from their homes to design cards and write notes of appreciation that will be sent to veterans who are residents of nursing homes throughout Jefferson County.

The Tri-State Young Marines, a national youth program for boys and girls, ages 8 through high school, focuses on leadership, citizenship through community service, self-discipline and living a healthy, drug-free lifestyle.

“It’s a very important part of the Young Marines program to honor our veterans, and with everything being canceled, we thought that this would be a good avenue,” Wendy Barr, the group’s assistant adjutant, said of the project that was not a mandatory undertaking.

“There are hundreds of other Young Marines units all over the country, and everybody’s doing all different kinds of things to honor the veterans or to show good citizenship, and we just thought that this was the best thing to do,” Barr said. “I mean I like receiving cards and letters — I’m not a veteran — but how meaningful would that be to them, especially when some of them are in a nursing home, and they have no contact with outside family.”

“In March, after realizing that we would not be meeting in person anytime soon, we decided to begin having virtual meetings to keep our Young Marines engaged,” explained Barr, noting the first virtual drill was held March 13.

“We typically are busy at this time of year focusing on Memorial Day, Armed Forces Day and Flag Day events,” Barr said. “These events are an opportunity for our Young Marines to pay tribute to our nation’s fallen and our veterans. With so many events being canceled, we found this as an opportunity to continue that focus while abiding by the COVID-19 restrictions. What better way to do that than by honoring our veterans? We rolled this letter campaign out on April 28 and gave the Young Marines two weeks to write as many letters as they wished.”

Barr explained the Tri-State Young Marines contacted the Jefferson County Veterans Service Commission, asking if they wrote letters, would the veterans commission ensure that local veterans would receive them.

“They said that they would be honored to help,” Barr said, noting that “honoring our veterans, good citizenship and community service are all very important parts of the Young Marines program.”

The letters will be sent to them, according to Clutter, and any additional ones will be made available by request through an e-mail to jcvets@jeffersoncountyoh.com or by visiting the Facebook page JCVETSC.

Under normal circumstances, Brooks said she attends the Motorcyclist Memorial Annual Rededication Ceremony held in Hopedale during the Memorial Day weekend. “My father and brother, both veterans, are memorialized on the wall. This year the rededication ceremony has been postponed and will now be held over Labor Day weekend with the ceremony on Sept. 5,” she said.

On Memorial Day, she attends one of the local ceremonies. “This year, I will be traveling out of town to visit the graves of family members,” she said.

Ways to observe the day could include a visit to veteran memorials, suggested Brooks.

“Visit the veteran sections of the cemeteries, say a prayer to show your respect and acknowledge their sacrifice. Fly a flag, recite the Pledge of Allegiance, sing the ‘Star-Spangled Banner’ and ‘God Bless America,’ because bottom line — we are truly blessed to live in a country where men and women are willing to sacrifice their lives for us,” she said.

The Wintersville American Legion Stevens-Christian Post 557 organized a flag planting Saturday at Fort Steuben Burial Estates in Wintersville in an effort to place flags on the graves of more than 1,800 veterans buried there.

Memorial Day services will be held there on Monday, beginning at noon, according to Holly Lewis, adjutant. The post commander is Ken Ware.

“We will be broadcasting this event live on the Fort Steuben Burial Estates Facebook page,” explained Lewis, who will be the speaker. “The cemetery has asked that if anyone comes in person, that they please stay in their cars to observe the ceremony and maintain social distancing recommendations.

“We felt that it was important to honor those who gave the ultimate sacrifice regardless of the circumstances around us,” Lewis commented. “We had to get creative to make this happen.”

Asked for suggestions on other ways people could observe Memorial Day, Lewis responded, “A moment of silence for the fallen, reflection on the sacrifice they made and how that ensured our freedom and remembering the family members who lost a precious loved one are all ways to honor the memory of our fallen.

“The public also is being asked to light a candle of remembrance at dusk on Memorial Day,” Lewis added.

There will not be a Miss Poppy this year, a tradition that will be renewed next year, according to Lewis.

“We read about them every day,” she said.

“In the village of Richmond, our special event is the Memorial Day parade,” Grimm explained of the holiday that begins with an eggs, sausage and pancakes breakfast at the Richmond United Methodist Church, followed by the parade and then a service and speaker’s message given at Richmond Union Cemetery.

But those public holiday staples aren’t happening, and neither is something else.

“This was always the day when the American Legion Auxiliary sold the poppies made by the men at the veterans home in Sandusky,” Grimm noted. “Last year, $531 was collected from the people at the breakfast and the parade,” she noted.

A different approach is being taken this year, according to Grimm.

“We are asking those who would like to contribute to send donations to the American Legion Auxiliary, P.O. Box 137 Richmond, OH 43944. Poppies will be in Jax’s Pizza and the outer lobby of the Richmond post office, for those wanting to wear one, but we ask folks to mail their contributions,” Grimm added.

Things will be quite different in Unionport on Monday, as well.

Village resident Mary Catherine Mull has historically been involved in the village’s Memorial Day celebrations that include a parade, service and a breakfast and lunch.

“Celebrating Memorial Day won’t be the same this year,” Mull said. “To just think a year ago we here at Unionport and our surrounding areas were all getting excited and ready for the parade and decorating and displaying our flags and looking forward to the band and watching it perform and other activities.

“Hopefully and prayerfully, 2021 will be much better for all of us,” Mull noted, anticipating that she will sit on her front porch on Memorial Day, “remembering how we honor this day and just thinking of different memories.

“It will be a very quiet one.”

Follansbee American Legion Post 45 Commander Tom Mirabella said he and other local, district and state American Legion officials will conduct a Memorial Day service at 11 a.m. Monday at the Weirton Honor Roll veterans monument near Wal-Mart. Everyone is welcome to attend while practicing social distancing.

Because of public health officials’ recommendations during the pandemic, Memorial Day services won’t be held at Brooke Hills Park. But area residents are welcome to honor local veterans at the Brooke County Veterans Memorial Park there during the Memorial Day weekend.