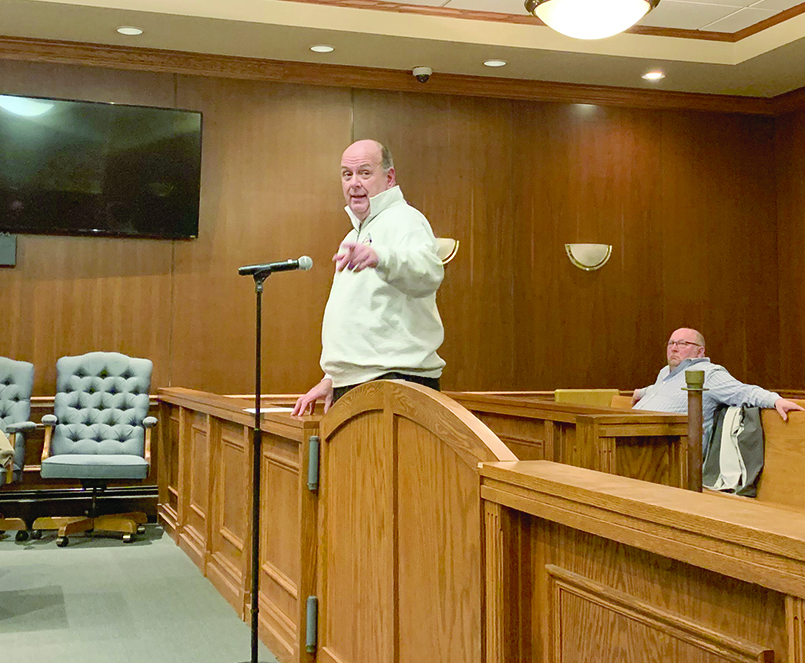 STEUBENVILLE — After a two-week hiatus, City Council is poised to resume public meetings Tuesday — though the public’s participation will be extremely limited.

In accordance with state and federal “social distancing” mandates and coronavirus safety recommendations, only three city officials — Mayor Jerry Barilla, City Manager Jim Mavromatis, and Clerk of Counci Karly Haley — will be in council chambers, along with media representatives. That means no more than four or five private citizens will be permitted in council chambers.

For now, the council members themselves will participate through a conference call.

“There isn’t a member of council who doesn’t want to be back,” Mavromatis said. “We just have to put safety first, (practice) social distancing. We’re all in an age bracket that makes us vulnerable “

Admittedly, there’s not much on this week’s agenda — an ordinance authorizing purchases of more than $3,000 without a purchase order, pursuant to Ohio Revised Code — though since it’s been three weeks since their last meeting, council members are sure to have questions to ask and items to report.

“I’m glad we’re getting back to running the city, to meeting — even though it won’t be in person — to give the city and citizens some sense of normalcy again,” 6th Ward Councilman Bob Villamagna said. “But even though the last two weeks we haven’t had meetings, we’ve all been available for calls and have been (following up) on things. Service requests have been addressed.”

Fourth Ward Councilman Scott Dressel said break or not, he’s been responding to questions from his constituency.

“We haven’t been gone, at least for me,” he said. “I’ve been addressing peoples’ questions daily, just like always. (And) I stay updated with Jim Mavromatis and (City Finance Director) Dave Lewis.”

Dressel said meeting by conference call “will work fine, and is a safer way to meet right now until this COVID-19 pandemic is over,” adding one of the most pressing issues they’ll have to face in coming weeks will be finances.

“At this point the largest issue the city is facing is a drop in tax revenue due to some businesses being closed down,” he said. “We will have a better handle on the financials over the next few weeks, there could (be) significant negative impact.”

Mavromatis said it will be 60-90 days before they’ll know how city finances will be impacted by the pandemic.

“We just finished the first quarter, then we’ll see where the shortfalls are going to be,” he said. “Until we get through it, we won’t know where we’ll be financially.”

Fifth Ward Councilman Willie Paul agreed, saying there are “a lot of issues for us to deal with — for one, the lack of financing that will be coming in from taxes, water bills that will be outstanding.”

He said all they can do is “take one bite of the apple at a time.”

“We can’t solve all the problems we’re going to have, we’re just going to have to categorize which is most important, start working on that and then go on to the next major item,” Paul said. “But it’s not going to be all at one meeting, at one time. It’s probably going to take us six or seven months to figure out where we are financially.”

“I’m concerned about our finances, I really am,” he said. “This is impacting the whole country — for a small town like ours, we were just starting to turn the corner on financies … it’s going to have a bearing on the city. It could impact city employees or some of the projects going on that might have to be put on hold. Everyone’s going to have to watching spending, tighten their bels. You don’t know how long it’s going to go on.”

Even so, 3rd Ward Councilman Eric Timmons said it’s “good to be back.”

“The city still has to function, this pandemic is not going to last forever,” he said. “We have to be ready to get going as soon as everything returns to normal, I hope sooner rather than later.”

Councilwoman at large Kimberly Hahn said there’s no disputing council has a lot on its plate.

“Just because we haven’t been meeting doesn’t mean we haven’t been thinking about issues,” she said. “We’ve been thinking and preparing. But it is critical that we get together — we do not act alone, we act in concert. It’s going to feel different, there’s going to be an adjustment. We pray and we work, that’s what we can do. We need to focus on what is most pressing.”