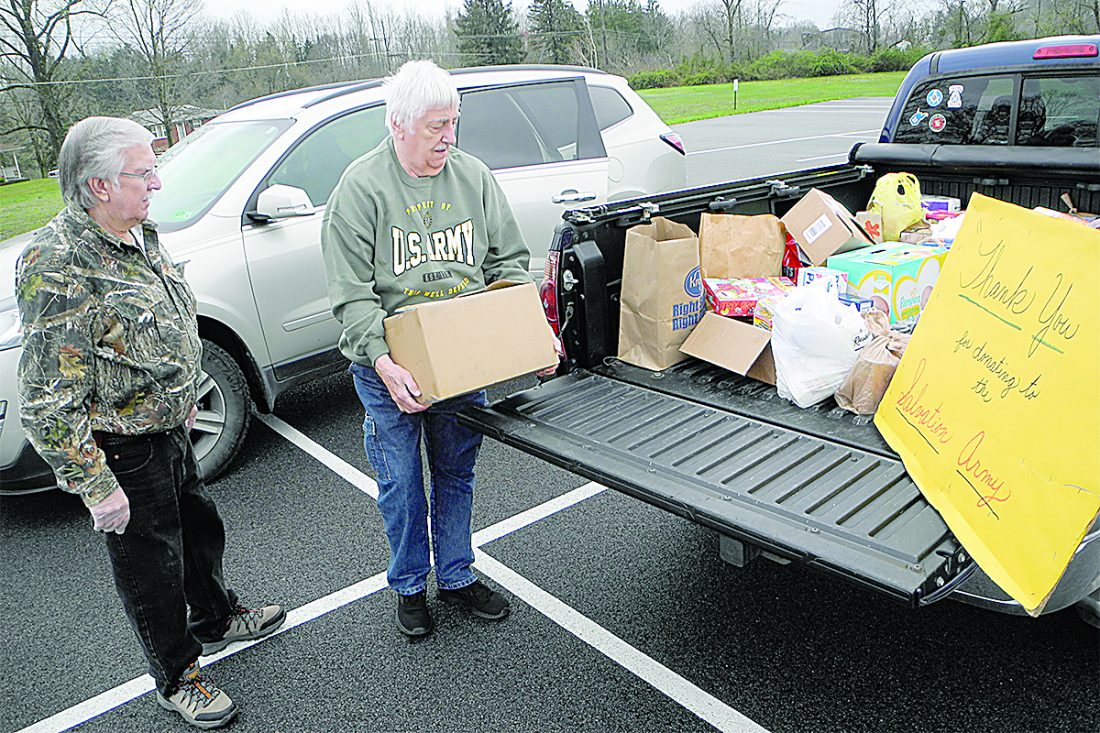 DOING THEIR PART — Kenneth Dight, a volunteer with Wellsburg Church of the Nazarene, assists Frank Ferrari of Wellsburg with a donation of food for the Brooke-Hancock Salvation Army during a food drive held by the church on Wednesday. Salvation Army Lt. Gene Hunt said the church is among many that have stepped up to help the organization to replenish its food pantry. -- Warren Scott

WELLSBURG — The commander of the Brooke-Hancock Salvation Army said people whose jobs have been affected by the COVID-19 coronavirus have approached the organization for help.

Hunt said the good news is many local churches, groups and individuals have stepped up, holding food drives and making donations to help re-stock food pantries at both locations.

“We give God the credit first, but the community has really stepped up recently. We’re filling up the food pantry now,” he said on Thursday.

Among the Salvation Army’s recent donors were members of Wellsburg Church of the Nazarene, which held a food drive at its parking lot off state Route 27 on Wednesday.

Kenneth Dight, a volunteer with the church, said nearly $1,000 in monetary donations was received as well as many non-perishable food items.

He said the church regularly collects donations for the charity, often focusing on a specific item its food pantries may be short of.

As he manned a pickup truck outside the church, his brother, Michael Dight, stopped by to chat.

Michael said he is a member of Brooke Hills Free Methodist Church, which donated food it would have used for an onsite program for the mentally impaired that has been temporarily suspended by the coronavirus.

Hunt said the thrift stores at both locations have been closed because they are deemed non-essential but the Salvation Army continues to accept donations of clothing for distribution to residents in need.

With the stores closed, other items aren’t needed.

He noted proceeds from the stores’ sales go to such services as assistance to residents in paying utilities, which has increased greatly in the last six months due to the area’s economic difficulties more than the recent pandemic.

Hunt said monetary donations can be used to help residents with that need or to purchase meat, bread and other perishable food and other items the food pantries may be lacking.

He said donors can earmark checks in the area they prefer.

Otherwise, the Salvation Army will use the money to serve local residents wherever there is the greatest need.

He added the Weirton headquarters at 794 Cove Road and the Wellsburg Service Center at 401 Commerce St. (state Route 2) are open from 9 a.m. to 4 p.m. Monday through Friday, except for Good Friday.