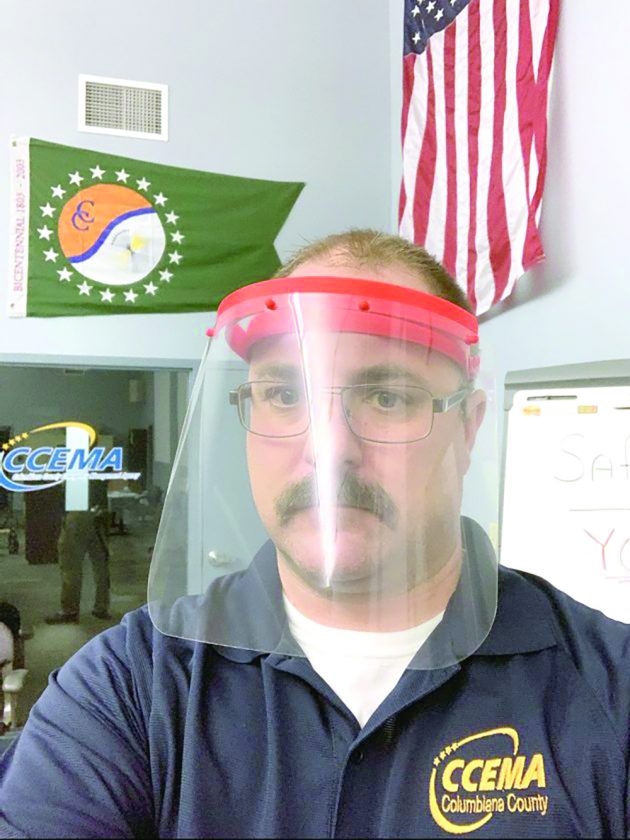 LISBON — Plastic face shields being made at the Columbiana County Career and Technical Center are among the personal protective equipment donated to the county Emergency Management Agency.

EMA Deputy Director Brian Rutledge said the county Educational Service Center’s Jeff Gill is making the shields on 3-D printers and other equipment at the CTC. He said Gill has produced 30 so far, with another 45 expected Thursday.

As production lab instructor at the ESC, Gill works closely with 10 local school districts, including the CTC, in implementing their science, technology, engineering and mathematics (STEM) curriculum, which includes the use of 3-D printers.

When the EMA issued the call several weeks ago for personal protective devices in response to the coronavirus crisis, Gill began investigating how they could use existing 3-D printers at the CTC and other equipment to produce face shields.

After doing some research with the help of his fellow instructors, he determined the 3-D printers could produce the plastic head bands to hold the shields in place. Gill wanted to make the shields from plexiglas but he did not have any, nor was he confident he could obtain any.

Instead, Gill turned to transparencies, those clear paper-size sheets of thin plastic that are turned into visual overlays by teachers on overhead projectors. He was able to turn them into face shields using the CTC’s laser engraver.

“If transparencies worked, I already had a lot and I knew I could get a lot more,” Gill said. He contacted his fellow educators and they began sending him boxes of their unused transparencies.

Rutledge said the first group of shields are being made available to ambulance crews since they never know what to expect when responding to a call.

“I sure hope they’re useful. They’re clear enough you can read through them and will prevent stuff from getting on your face,” Gill said.z

He will be able to produce 45 shield masks per day until his supplies run out in another week or two. If the EMA needs more, he will try to procure more materials.

Rutledge said some of the school districts have also donated unused masks and gloves that were left over from the swine flu outbreak in 2009. “Whatever they had they gave to the EMA,” he said.

Rutledge said everything they have received so far has been either given to ambulance crews or people who work in nursing and assisted living facilities because they were in the most immediate need. Supplies will also be made to first responders, like police and fire.

He said the local hospitals are already receiving supplies directly from other sources and from the state via the health departments.