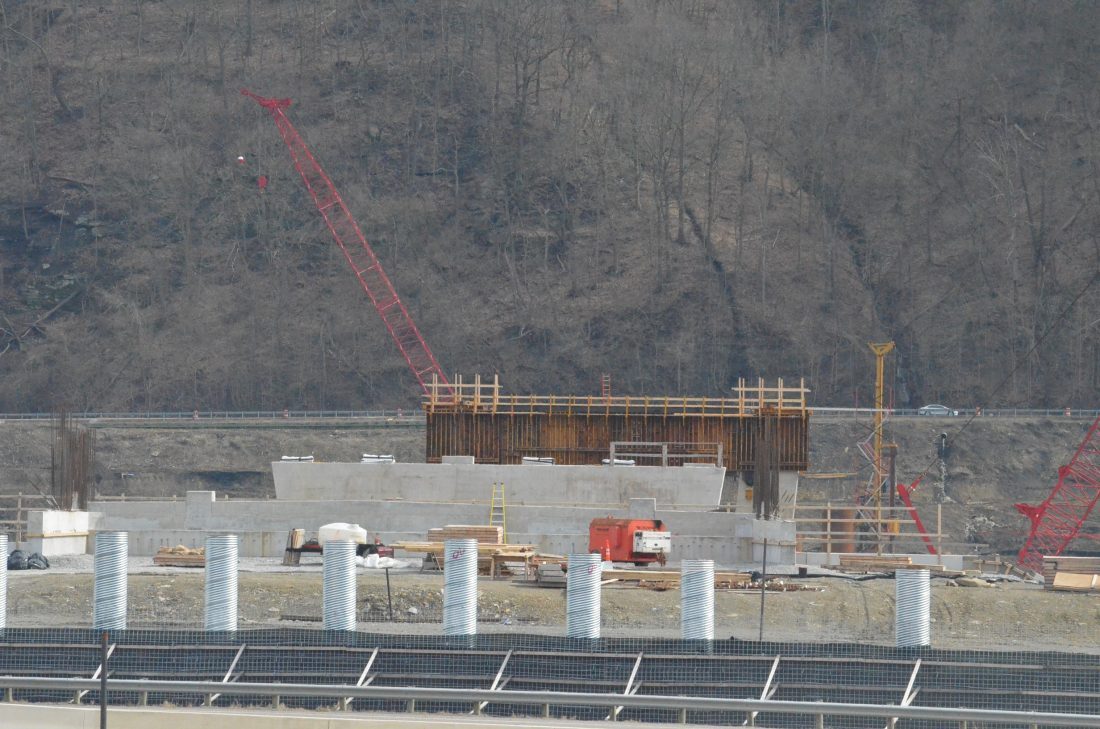 CONSTRUCTION CONTINUES — Work on a new bridge over the Ohio River between Wellsburg and Brilliant is ongoing despite the shutdown of some construction sites around the Ohio Valley. (Photo by Kim North)

WELLSBURG — Despite the shutdown of numerous construction sites — locally, regionally and nationally — due to the coronavirus pandemic, workers continue to construct what is being referred to as the “Wellsburg Bridge” by the West Virginia Division of Highway officials.

When finished, the structure will span the Ohio River from about a mile south of Wellsburg on W.Va. State Route 2 to the intersection of Third and Clever streets near Ohio State Route 7 in Brilliant.

John Witherow of the West Virginia Division of Highways said during a telephone interview Tuesday afternoon that the Flatiron Corp. of Broomfield, Colo., has continued to work on the $131 million project that will include 830-foot tied-arch span. The project is now set for completion in early 2022.

“The work is ongoing,” he offered when asked if work on the project had been delayed by any of the stay-at-home orders issued this week by West Virginia Gov. Jim Justice or Ohio Gov. Mike DeWine.

Construction crews began building segments of the main tied-arch section of the bridge several months ago in an area along the river near Wellsburg. One of what will eventually be five bridge piers has been visible on land on the Ohio-side of the river for some time. One of the remaining four piers in the water also is visible; the other three will be constructed in the near future.

Workers with Flatiron are erecting the largest part of the span near the bridge site. It will then be lowered onto piers from 80 feet in the air using jacks positioned on barges. With an estimated weight of 4,000 tons, the tied-arch span is believed to be the heaviest structure to be lifted in such a way in the United States.

Officials have said it should make for quite a sight when the tied-arch section of the bridge is hoisted high above the Ohio River and set into place.

According to officials, Flatiron will have a 72-hour window in which to complete the placement. All river traffic will be shut down for that period, they added.

Justice was on hand with Brooke County officials when ground was broken for the span in July 2018. He said the bridge is a collaboration of the West Virginia and Ohio departments of transportation. Both have drawn on federal highway money to finance the project. The states have signed an agreement in which West Virginia, which owns the river, will pay 65 percent of the cost. Ohio will pay the remaining 35 percent.

For years residents on both sides of the river have pleaded their cases for such a structure. Local studies have shown the need for the new bridge, citing the advancing age of the Market Street Bridge in Steubenville and the distance between the newer Veterans Memorial Bridge connecting Steubenville and Weirton and bridges in the Wheeling area. Officials have suggested the span would encourage economic development in the southern ends of Brooke and Jefferson counties, while offering another transportation artery in areas that have been plagued by rock slides.