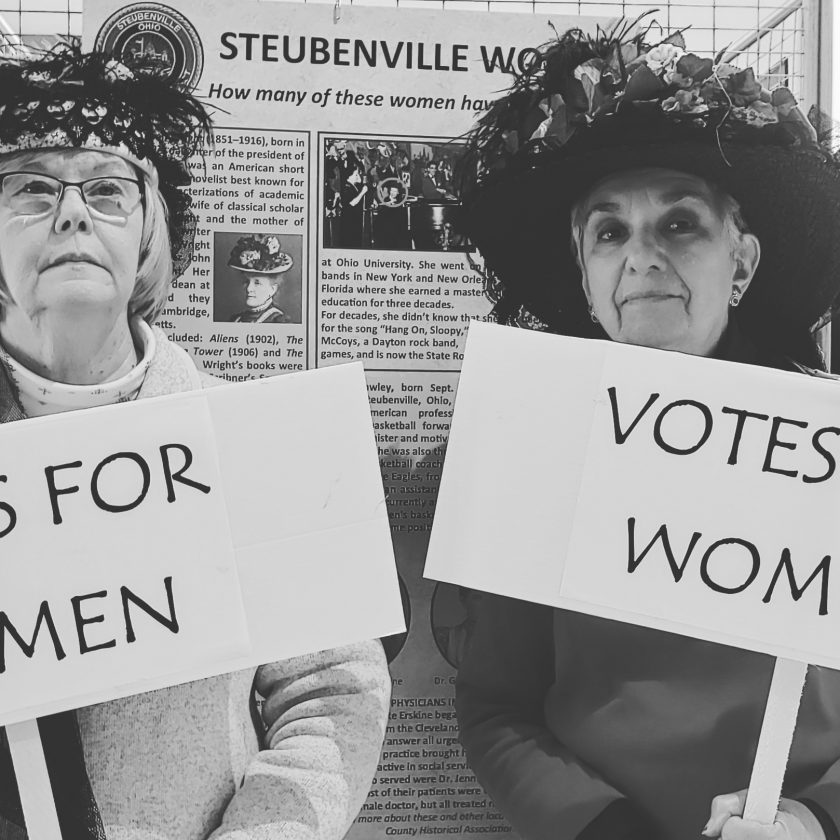 REMEMBERING THE PAST — Judy Barilla, left, and Judy Bratten of the Steubenville Visitors Center dressed as suffragettes to promote part of the women’s history exhibit at Historic Fort Steuben. (Contributed photo)

STEUBENVILLE — Historic Fort Steuben is adding a twist to its celebration of Women’s History Month, which this year also commemorates the 100th anniversary of the passage of the 19th Amendment giving women the right to vote.

Speakers of all ages are invited to give a two- to three-minute “soap box speech” for or against the cause, just as it might have been presented in the early 1900s.

Participants can get on their soap box at any time, but the Fort’s Paul Zuros and Judy Bratten “particularly invite speakers to present their speech” on March 7. Those wishing to speak can schedule a specific time and invite friends and family to attend.

Although dressing for the part is not required, it would add to the event. The fort will have signs and period hats as well as an appropriate backdrop for photos.

A lesson plan that teachers can use to prepare students to participate also is available.

The fort, meantime, will be hosting an exhibit in the Steubenville Visitors Center entitled Ohio Women Vote: 100 Years of Change, from Monday until March 9. The exhibit, from Ohio History Connection, will be open Monday through Friday from 10 a.m. to 4 p.m., or by appointment. It tells the story of the development and effects of the 19th Amendment. It was developed so the centennial could be celebrated in all corners of the state and to give a platform for the diverse women of Ohio history to speak.

A companion exhibit, Women of Steubenville and Ohio, will also be on display in the Visitor’s Center, 120 S. Third St., from March 2-13.

“This exhibit produced by the Ohio History Connections and Ohio Humanities Council brings the movement up to date,” explained Zuros, director of operations at Historic Fort Steuben. “It not only celebrates the efforts of the women who worked for the right to vote, but also highlights the century of women’s activism that followed.

“To bring the exhibit to life, we are inviting girls and women to get their pictures taken carrying Women’s Suffrage signs before a panorama of 1910 Steubenville. We also encourage students to develop a three-minute ‘soap box speech’ to be presented when they visit.”

The Ohio History Connection exhibit consists of twelve panels and poses thoughtful questions, such as “What does it mean to be a woman?” and “What does voting give you the power to do?” to historic and contemporary Ohio women in activism, Bratten said. Their answers help the viewer learn that the 19th Amendment was not the end of women’s activism; it was the beginning. Voting enabled women to further their education, pursue careers, change laws, create social service and cultural organizations, and run for office themselves.

“Our right to vote is something we take for granted today,” said Judy Bratten, assistant director. “But when our national government was first formed, women did not have that right. It took over 130 years for the dream of equal voting rights for women to become a reality but not without real struggles. In the days before automobiles, airplanes, telephones and computers, women traveled the country giving lectures, printing leaflets, organizing protests and parades. The efforts and dedication were incredible.”

Bratten noted that many of the suffragettes, as they were called, were also active in the movement to end slavery which was finally achieved with the 13th Amendment in 1865. Many of the methods used to promote abolition were then applied to the equal voting rights efforts.

“We must remember that voting was only part of the issue,” she said. “Women could not own property in their own name if they were married. They could not leave an abusive husband who had all the property in his name. Women were often considered property rather than equal human beings.”

The Nineteenth Amendment was passed by Congress in 1919. Ohio was the fifth state to ratify the amendment on June 16, 1919.

For information, to schedule a soap box speech or visit, contact the Fort Steuben Visitor Center at (740) 283-1787 or email info@oldfortsteuben.com.