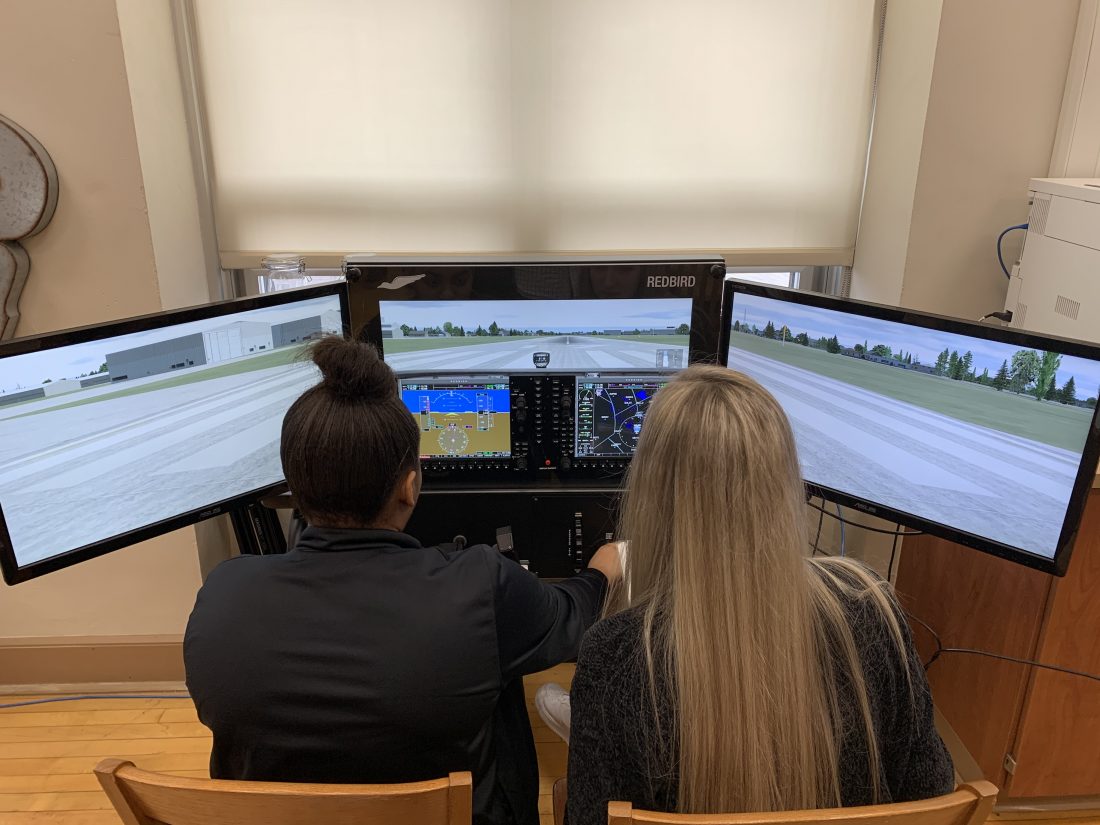 STEUBENVILLE — At 16, Elexis Martin already has figured out exactly where she wants to be, career-wise, a decade or two from now.

Martin has had her sights set on aviation since she was in the seventh grade at Harding. Now a sophomore at Steubenville High School, she said she’s studying for her knowledge test. If she passes, she’ll start logging flight hours so she can take her FAA Checkride, a prerequisite to getting her pilot’s license.

“I’m still studying for it,” she said, adding, “I was very lucky, very blessed to get the opportunity, for God to place the thought for me to be in aviation in the seventh grade. It was just an after school program, I thought, ‘Yeah, that sounds good, I’ll give it a try. Then I got really interested in it.”

The aeronautics program is part of Big Red’s vaunted career pathways program that allows kids to explore opportunities in fields like Innovations in Science and Technology, Health Infomatics and Aerospace Engineering and Aviation. “We offer real world scenarios and projects, opportunities for students to find out if it’s for them,” Instructor Natalia Campana said. “And if they don’t, then they didn’t waste four years.”

Campana, a Steubenville graduate, was recruited by the school district to found the aeronautics program in partnership with the district and STEM Director Shayna Wydra.

“Anyone who is part of our advanced career classes, we have them go to the middle school and talk,” Principal Ted Gorman said. “(Natalia) got them so excited, they were ready to go up in the air and fly that day. It made some parents a little nervous at first, it was so out-of-the-ordinary. She’s a very dynamic teacher.”

Whatever Campana said, it worked: Students loved the after school program and by the following year Harding had worked aviation into its school-day curriculum. Campana said she’s not teaching it anymore because of her high school workload, “but there’s another teacher, and they’re doing great.” She said the program also “collaborates” with the Wells fourth grade and regularly invites other grade schoolers to visit.

“It’s important for kids to want to come to school,” Gorman said. “We have to find ways t o get them excited every day. This program is a wonderful opportunity for them to do that. I don’t know how many aviation programs there are throughout this state, but I know locally no one else has anything like we have. (We get) to see their excitement, to see them looking forward to coming to class every day.”

Campana said they take a cross-curriculum approach at Big Red, so what the kids learn in one class — say math or English or Science — is reinforced in the next.

“Whether you call it a blessing or God’s path, whatever, it’s been amazing,” Campana said. “You have kids seeing the reason academics make sense. Trig makes sense, science makes sense, engineering makes sense…it all works. And it’s getting everybody excited: It’s not like it’s just us over here, it’s not an island. Everybody is working together.”

The lab also has an 80 mile per hour wind tunnel that allows students to build wings to test in it so they can calculate aerodynamics, and a laser printer so they can fabricate their own air coils, airplane pieces or drone prototypes airplanes.

“There’s all kinds of stuff they can do for four years, along with training for their private pilot license,” Campana said. “We have a lot of students who have a passion for it. Steubenville High School offers students an opportunity to discover (that) passion.”

Elizabeth Swingle, an Aviation Safety Inspector with Flight Standards District Office for the Great Lakes Region in Columbus, said there’s a multitude of career opportunities extending even beyond flying planes, helicopters and drones to possibilities like IT specialists, radar systems and air traffic controllers to medical transportation,

Best of all, Gorman said, is that it doesn’t cost parents anything.

“We get grants and things like that,” he said. “So it opens up doors and opportunities for our students — a lot of them had never been in a plane before they started this class.”

Skyler Pfouts, a junior, wanted to be a fighter pilot when he joined the program two years ago. That still may be in the cards, but he’s also thinking about using his mad pilot skills for air law enforcement.

“This (program) gives you a first-hand look at what you’re going to be dealing with, things like learning to run a navigation system,” he said. “I feel more schools should have this, every students should take a look.”

Kiera O’Brien, a sophomore, said she’s not looking to make flying her life’s work. What she really wants to be is a lawyer, and she figures being able to fly herself will be an asset.

“When you’re in the air, you can see everything,” O’Brien said. “It’s just really peaceful, it helps me clear my mind.”

Senior Eric Robb announced his arrival in the simulator lab by flying the tiny “quad-copter” he built in engineering into the room and landing it in a visiting FAA Aviation Inspectors’ hand.

“Quad-copter is the technical term for drone,” said Robb, who built his in Big Red’s engineering class. “It wasn’t terribly difficult. A little intricate, but you get there.”

Robb said he’s also “built a lot of (model) airplanes out of foam board and stuff” that he flies, and said he’s working toward his private pilot’s and drone licenses, with an eye toward “some kind of commercial or private flying.”

“My mom is very excited, she’s keeping me on the straight and narrow, making me stay focused and look for scholarships. It’s going to be a lot of money, but she’s helping me find ways I can do I,” she said.

“I think it’s really cool and I really wanted to try something different. I think there’s going to be bumps down the road — you have to take tests, and you’re not always going to pass them. But I’ve just got to keep focused.”

And she said the first time Campana took her up in her plane, “I knew it was what I wanted to do. It was important.”

“Sometimes I do get nervous,” Martin adds. “But for the most part, I’m really interested in it so I don’t think about being scared. And I’m way calmer flying. It sounds weird to say, but I’m calmer in the air than I am in a car. I just think that’s where my happy place is — in the air.”