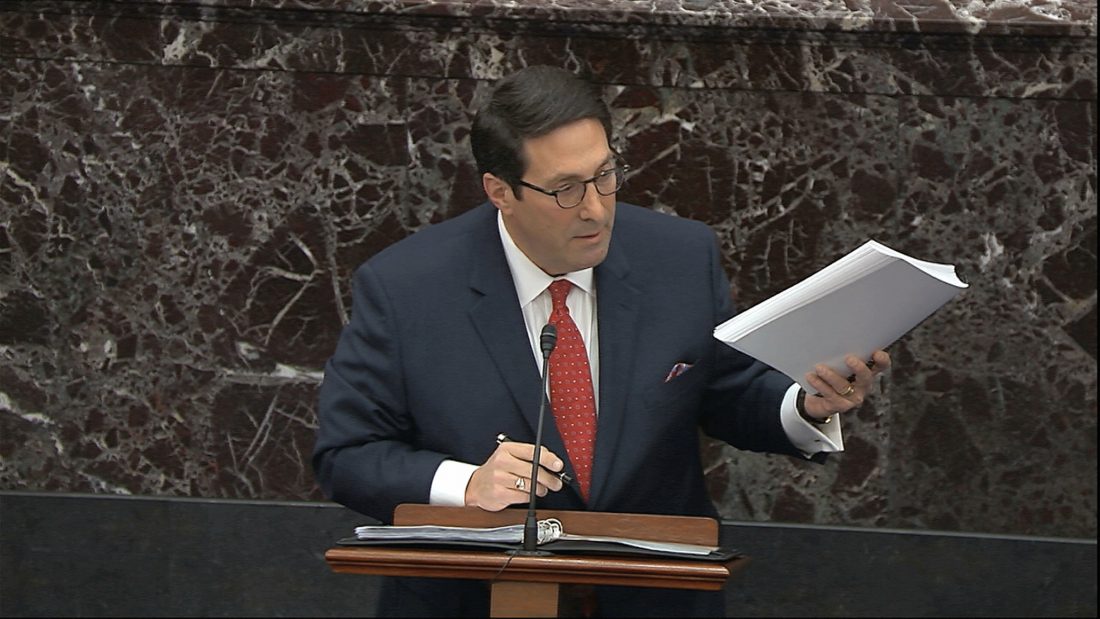 In this image from video, personal attorney to President Donald Trump, Jay Sekulow, hold a copy of the Mueller Report as speaks during the impeachment trial against Trump in the Senate at the U.S. Capitol in Washington, Saturday, Jan. 25, 2020. (Senate Television via AP)

WASHINGTON — President Donald Trump’s lawyers plunged into his impeachment trial defense Saturday by accusing Democrats of striving to overturn the 2016 election, arguing that investigations of Trump’s dealings with Ukraine have not been a fact-finding mission but a politically motivated effort to drive him from the White House.

“They’re here to perpetrate the most massive interference in an election in American history,” White House Counsel Pat Cipollone told senators. “And we can’t allow that to happen.”

The Trump legal team’s arguments were aimed at rebutting allegations that the president abused his power when he asked Ukraine to investigate political rival Joe Biden and then obstructed Congress as it tried to investigate. The lawyers are mounting a wide-ranging, aggressive defense asserting an expansive view of presidential powers and portraying Trump as besieged by political opponents determined to ensure he won’t be re-elected.

“They’re asking you to tear up all the ballots across this country on your own initiative, take that decision away from the American people,” Cipollone said.

Though Trump is the one on trial, the defense team made clear that it intends to paint the impeachment case as a mere continuation of the investigations that have shadowed the president since before he took office — including one into allegations of Russian election interference on his behalf.

Trump attorney Jay Sekulow suggested Democrats were investigating the president over Ukraine simply because they couldn’t bring him down for Russia.

“That — for this,” said Sekulow, holding up a copy of special counsel Robert Mueller’s report, which he accused Democrats of attempting to “relitigate.” That report detailed ties between the 2016 Trump campaign and Russia but did not allege a criminal conspiracy to tip the election.

From the White House, Trump tweeted his response: “Any fair minded person watching the Senate trial today would be able to see how unfairly I have been treated and that this is indeed the totally partisan Impeachment Hoax that EVERYBODY, including the Democrats, truly knows it is.”

His team presented for only two hours Saturday, reserving the heart of its case for Monday.

Acquittal appears likely, given that Republicans hold a 53-47 majority in the Senate, and a two-thirds vote would be required for conviction and removal from office. Republican senators already eager to clear Trump said Saturday that the White House presentation had shredded the Democratic case.

Several of the senators shook hands with Trump’s lawyers after their presentation. The visitors galleries were filled, onlookers watching for the historic proceedings and the rare weekend session of the Senate.

The Trump attorneys are responding to two articles of impeachment approved last month by the House — one that accuses him of encouraging Ukraine to investigate Biden at the same time the administration withheld military aid from the country, and the other that accuses him of obstructing Congress by directing aides not to testify or produce documents.

Trump’s defense team took center stage following three days of methodical and passionate arguments from Democrats, who wrapped up Friday by warning that Trump will persist in abusing his power and endangering American democracy unless Congress intervenes to remove him before the 2020 election. They also implored Republicans to allow new testimony to be heard before senators render a final verdict.

In making their case that Trump invited Ukraine to interfere in the 2020 election, the seven Democratic prosecutors peppered their arguments with video clips, email correspondence and lessons in American history. At stake, they said, was the security of U.S. elections, America’s place in the world and checks on presidential power.

On Saturday morning, House managers made the procession across the Capitol at 9:30 to deliver the 28,578-page record of their case to the Senate.

Republicans accused Democrats of cherrypicking evidence and omitting information favorable to the president, casting in a nefarious light actions that Trump was legitimately empowered to take. They focused particular scorn on Schiff, trying to undercut his credibility.

The Trump team had teased the idea that it would draw attention on Biden and his son, Hunter, who served on the board of a Ukraine gas company Burisma, while his father was vice president. But neither Biden was a focus of Saturday arguments.

Instead, Republicans argued that there was no evidence that Trump made the security aid contingent on Ukraine announcing an investigation into the Bidens and that Ukraine didn’t even know that the money had been paused until shortly before it was released.

Trump had reason to be concerned about corruption in Ukraine and the aid was ultimately released, they said.

“Most of the Democratic witnesses have never spoken to the president at all, let alone about Ukraine security assistance,” said deputy White House Counsel Michael Purpura.

Purpura told the senators the July 25 call in which Trump asked Ukraine President Volodymyr Zelenskiy for the Biden investigation was consistent with the president’s concerns about corruption, though Trump never mentioned that word, according to the rough transcript released by the White House.

Purpura said everyone knows that when Trump asked Zelenskiy to “do us a favor,” he meant the U.S., not himself.

“This entire impeachment process is about the house managers’ insistence that they are able to read everybody’s thoughts,” Sekulow said. “They can read everybody’s intention. Even when the principal speakers, the witnesses themselves, insist that those interpretations are wrong.”

Defense lawyers say Trump was a victim not only of Democratic rage but also of overzealous agents and prosecutors. Sekulow cited mistakes made by the FBI in its surveillance of a former Trump campaign aide in the now-concluded Trump-Russia election investigation, and referred to the multi-million-dollar cost of that probe.

“You cannot simply decide this case in a vacuum,” he said.

One of the president’s lawyers, Alan Dershowitz, is expected to argue next week that an impeachable offense requires criminal-like conduct, even though many legal scholars say that’s not true. Sekulow also said the Bidens would be discussed in the days ahead.

The Senate is heading next week toward a pivotal vote on Democratic demands for testimony from top Trump aides, including acting chief of staff Mick Mulvaney and former national security adviser John Bolton, who refused to appear before the House. It would take four Republican senators to join the Democratic minority to seek witnesses, and so far the numbers appear lacking.

Sen. Lindsey Graham, a Republican ally of Trump’s, said he thought the legal team had successfully poked holes in the Democrats’ case and that the Democrats had “told a story probably beyond what the market would bear.”

He said he had spoken to Trump two days ago, when he was leaving Davos, Switzerland.

Asked if Trump had any observations on the trial, Graham replied: “Yeah, he hates it.”