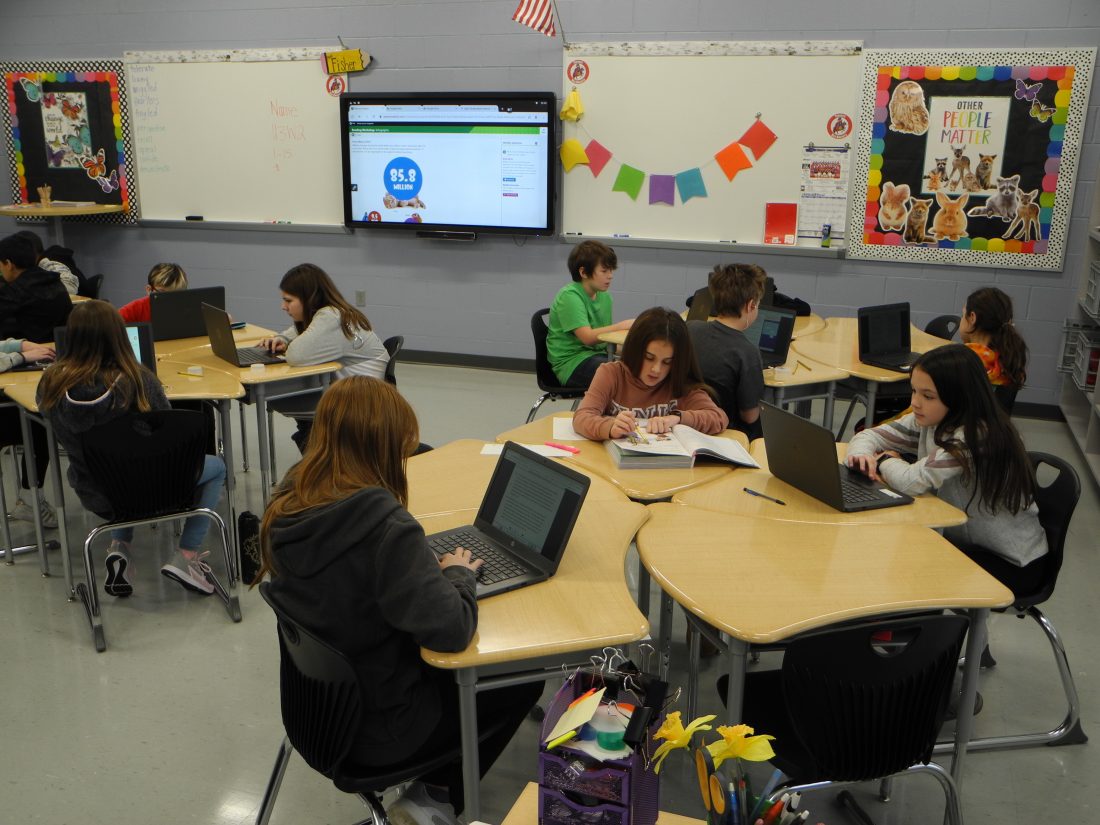 NEW TECHNOLOGY — Jill Fisher’s fifth-grade class is among many at the new Toronto Elementary School benefiting from the use of laptop computers and an interactive whiteboard she and other teachers use to access information and images from the internet. (Photo by Warren Scott)

TORONTO — The new year brought a new school and much excitement for about 375 Toronto students of primary school age as they entered their new classrooms, cafeteria and gym for the first time.

Ann Silverthorn, the school’s principal, said the new school has generated enthusiasm from students and staff.

“It feels like everybody is excited to come to work,” she said, adding, “The kids said they couldn’t wait to try breakfast there.”

A more spacious cafeteria, which has boosted consumption of school breakfasts and lunches, is just one of the features students have applauded, she said.

A dedication will be held at the school at 10 a.m. Saturday, with an open house to follow until noon.

The 42,281-square-foot addition to Toronto Junior-Senior High School was built in three months by Hammond Construction of Canton using about $6 million from the Ohio School Facilities Commission and about $4 million in local funds set aside for the project.

It includes 22 classrooms, a cafeteria, a health center run by C.H.A.N.G.E. Inc. and a gym to be shared by primary and junior high school students.

Superintendent Maureen Taggart said the addition was part of the original designs for the junior-senior high school by the Cleveland architectural firm of Lesko and Associates. The school was completed in 2013 through a bond issue supported by voters.

Taggart said she’s pleased no new tax dollars were needed to build the addition, but economic factors did prompt its development.

She said in recent years the board realized the district needed to consolidate its facilities to remain fiscally sound on a long-term basis.

But construction of the new elementary school has enabled the district to better accommodate the needs of younger students and create a more energy-efficient facility, said Taggart.

Taggart noted the Karaffa school originally was a middle school and was designed for that age group.

For example, at the new school the students’ lockers are in their classrooms, not the halls, so they have easy access to their belongings and there are fewer interruptions to instruction, Silverthorn said.

Taggart said the basketball hoops in the gym also can be lowered to accommodate the younger children.

She added that unlike classrooms at the old school, each room in the addition has windows and the school benefits from natural lighting as well as more economical LED and motion-activated lighting.

The classrooms include interactive whiteboards with which teachers can access images and information from the Internet, desktop computers for the students to do work and research and sound systems which teachers and students may use to be better heard.

Silverthorn said students are looking forward to using an enclosed courtyard that can be seen through wall-length windows in the corridor.

Taggart envisions teachers planning outdoor lessons around the space, where picnic tables and benches will be added in the near future.

She noted the yard includes two trees planted in memory of Marine Sgt. Nate Rock, a 1997 Toronto High School graduate who was killed in action in Iraq in 2005, and Noah Long, a Toronto pupil who lost a courageous battle against leukemia at age 8 in 2014.

Taggart said the trees replace ones that had been planted at the former S.C. Dennis School and the new elementary school’s present grounds.

She said when warmer weather arrives, crews also will be adding playground equipment, a half basketball court and staff parking lot to the site.

Taggart noted the school board has agreed to transfer ownership of the former school, which was built in 1982, to the city for $1.

Mayor John Parker said there are plans to move to the school the city’s senior services and youth recreation programs offered at the Roosevelt Center as well as some city offices.

Parker said the move means more space for the programs and greater handicap accessibility for their participants.

Taggart said the school board has kept some offices and will continue to have its pre-school classes there, with plans to add more, pending community interest.

In return, the board will pay 30 percent of the building’s utility costs but not the cost to insure it.

“I see it as a win-win situation. We are grateful we were able to work with city officials to make that happen,” said Taggart.

She said the transfer has been delayed by the discovery that the school buildings all sit on the same parcel so space occupied by the old school must be surveyed and legally divided from it first.

Students, meanwhile, had very positive things to say about their new school.

Five-year-old Isabella Mamula, a kindergartener, is happy the table she used at the old school has been replaced with a desk with space to store her stuff. She also likes using a speaker while playing Last Man Standing with her classmates.

Third-grader Matix Clapham, who is 9, said he likes the colors of the classroom walls and “how the bleachers in the gym come out on their own.”

Eleven-year-old Tyrese Alexander, a fifth-grader, said, “I like the new school because the water fountains are electric and the classrooms are a lot nicer. There also are lot more windows so I can look out them.”

The building’s newer technology was a big hit with Dana Reiner, a 10-year-old fourth-grader.

“I like the whiteboard. My teacher uses it to teach us and during recess, she puts on a game for us to play. And we have automatic flushing toilets,” he said.