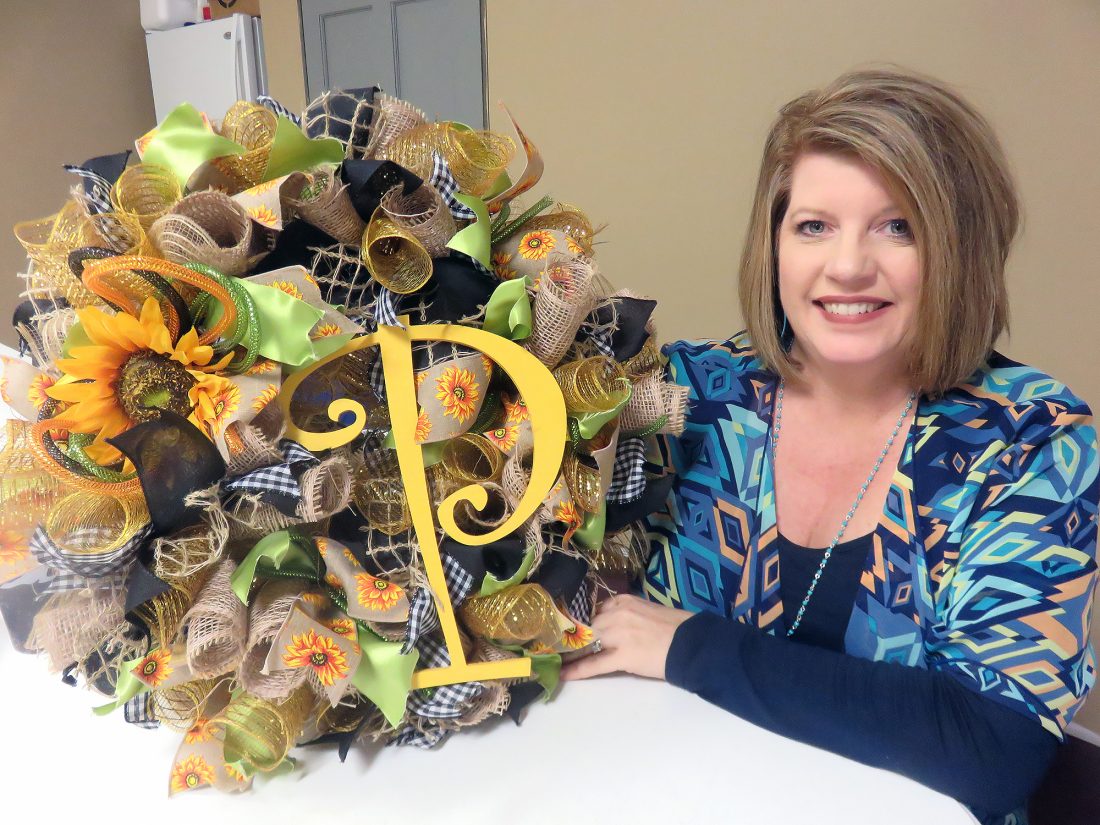 MAKE A WREATH, SUPPORT A CAUSE — Theresa Golden, city director of Refuge for Women Ohio Valley, holds a wreath that participants can make at a “Soup & Sip” fundraiser that will be held from noon to 2 p.m. on Feb. 16 at Leonardo’s Coffee House, located at 159 N. Fourth St., Steubenville. It will feature lunch, desserts and crafting with Joyce and Taylor Young of Bee Creative Crafts guiding participants on how to make a personalized wreath. Tickets are $40 available in advance at Hauser Furniture, 3905 Sunset Blvd., Steubenville. For information call (740) 264-1615. -- Janice Kiaski

STEUBENVILLE — It’s been a busy start to the new year for Refuge for Women Ohio Valley, a nonprofit, faith-based organization providing specialized long-term care for women who have escaped human trafficking or sexual exploitation.

On Jan. 11, three of its residents graduated during a ceremony held at the Sycamore Youth Center, bringing to four the number of women who have successfully embarked on a healing process and a new life offering dignity and hope, according to Theresa Golden, city director.

The first came in December, a monumental moment, Golden agreed.

“It’s a hard program, so it’s really in depth,” Golden said. “They spend a lot of time working and having to go through all the trauma they’ve had to experience and how to deal with that successfully. They put a lot of work into it and do a lot of volunteering, and they do several parts of the program through that nine months so it’s hard. They do sometimes want to run,” she said.

“It’s not always comfortable to relive (that) to even heal. They know the process is to make them heal, but it’s still hard work.”

Refuge for Women Ohio Valley is part of a network of homes around the United States that offer up to 12 months of safe housing at no charge to the residents with around-the-clock care “as clients progress through evidence-based, trauma-informed programming.”

The Jefferson County location is undisclosed for safety precautions and is one of five Refuge for Women safe houses in operation. It can accommodate six women. Two more are to open this year, according to Golden.

“We have houses in Kentucky, Nevada, Illinois, two in Texas and ours in Ohio and then we have another opening in southern California,” she said.

“Refuge for Women has had more than 200 women come through their program nationally since its formation in 2009,” Golden said. “Locally we’ve been operating for nine months, and we’ve had, as of Jan. 11, four graduates from our program.”

Graduating means “they’ve completed the first nine months of the program so that is where they really delve into the healing process and start working through all the things they’ve had to overcome, whether it’s addiction or just the different levels of trauma they’ve gone through,” Golden explained. “Then they start moving forward to what they want to do following the program — job skills, life skills, a couple of them want to go to college, so we get that process started, and at the end of that nine months, they’re considered graduated,” she said. “They’ve completed all the curriculum, all that part of it and from nine to 12 months, they start working on a daily basis but still have some accountability at the house, so it’s kind of like easing them back into living independently.”

She added, “Once they complete all those pieces that’s considered graduation, they are free to move on. Some go to other programs for a little bit of extra support and some feel they are ready to live independently so we help them get set up in an apartment or back to where family is that can help them get established or wherever there desire is to go.

“Some of them want some accountability at our house so they can have the option of staying an additional three months after graduation while they are getting back on their feet and applying for jobs or starting school or whatever their vision for their future is,” she said.

The women in the Refuge for Women Ohio Valley program are not local.

“The great thing about being part of a national organization is we don’t only have our six beds locally, we have a network of 30 to 42 beds that we can use to help women in our area, because they’re not going to get the help they need if they’re in the area where they’re being trafficked or where their drug supply comes from or they know everyone,” Golden said.

“We want to get them out of their environment to focus on their healing and not be worried about safety issues or concerns or distractions. We really want them to focus on themselves. If there is someone here in the area being trafficked we can get them to a safe place,” she said.

The national human trafficking hotline is (888) 373-7888. Locally, Golden can be reached by phone at (740) 792-4374 or by e-mail at theresa.golden@refugeforwomen.org. The website is www.rfwohiovalley.org. The Facebook page is Refuge for Women Ohio Valley.

“Our program is a voluntary program so there is an admission process that takes sometimes up to a week to do so if they’re looking for emergency housing, they can call us,” Golden said. “We can still help them somewhere while we work on the admission process or if they’re looking to apply to be part of a long-term program, we’ll start the process with them and help them get where they need to be.”

Refuge for Women needs local support, Golden said of the ministry that is completely free for the women but costs $100 a day per resident to run the program.

“It’s all private funding for the most part — churches that sponsor us as a mission, individuals who donate monthly or in an annual lump sum, corporate sponsors, we have a few grants we apply for and usually each individual location has their local foundations and organizations that will sponsor nonprofits,” Golden said.

One of those coming up a “Soup & Sip” that will be held from noon to 2 p.m. on Feb. 16 at Leonardo’s Coffee House, located at 159 N. Fourth St., Steubenville. It will feature lunch, desserts and crafting with Joyce and Taylor Young of Bee Creative Crafts guiding participants on how to make a personalized wreath. Tickets are $40 available in advance at Hauser Furniture, 3905 Sunset Blvd., Steubenville. For information call (740) 264-1615.

Some other fundraisers in the works with dates to be announced are a basketball tournament, a craft show fundraiser and the third-annual Night of Hope gala, which is in October.

While outright financial donations are appreciated, there are others ways to offer help to the nonprofit, including through volunteering; providing resources such as food and clothing and other necessities; offering jobs; or providing transportation for the residents to attend church, for example, or self-help programs such as Alcoholics Anonymous.

“Each location has a local board who is their advisory board for running the individual locations, and we have a national board that oversees all sites,” she explained. “We do have some positions on our board available. We will be voting in new members in a month or two, and if anyone interested they can reach out to me.”

She added, “We also could use volunteers to do different activities at the house, volunteering on the administrative side, helping with fundraisers and events and communications or it could be actual volunteers doing things in the home with the residents and the staff there in the home. They help us do deep cleaning in the home, in the summer there’s yard work and maybe construction projects and with the residents just anything that helps them lead normal lives.”

Volunteers who would be in contact with the residents must go through a screening process that involves a background check.

Refuge for Women Ohio Valley is becoming less of a secret as more people hear about it.

On Jan. 30, a sex trafficking question and answer community awareness event will be held at the main branch of the Public Library of Steubenville and Jefferson County at 407 S. Fourth St., Steubenville, beginning at 6 p.m. The panel discussion will focus on sex trafficking in the Ohio Valley.

“It’s a panel of different organizations who are a piece of the puzzle from law enforcement to a judge from a therapist to a survivor,” Golden said. “We just really want to get the word out about what it looks like in this area and how to prevent it.”

A Refuge for Women brochure lists a number of statistics, including that the sex industry is a $100 billion dollar industry worldwide. It notes that more than 31,000 human trafficking cases were reported in the United States in the last eight years and “if that’s the number reported, what is the actual number of occurrences?”

Golden said she is available to speak to area groups, organizations and churches and anyone interested.

“We also have a new prevention curriculum called Raise the Standard, where we’ll start going into the schools and teaching about healthy relationships and what that looks like and prevention from being manipulated or coerced into something,” she said.

The recent graduations have been a blessing to experience, according to Golden.

“I actually go to the house once or twice a week and interact with the ladies frequently, and they do attend a church where I attend so I see and talk to them,” she said. “It is amazing to see when they first came to our house at the beginning and to see the ones who graduated recently, the change in their demeanor and personality, they’re open, they’re free, even coming to a place of healing and restoration you don’t trust a lot, so being able to see light in their eyes again and realize we’re not here to hurt them we just want to help them live their life to the fullest and help rebuild them emotionally, mentally, physically and spiritually.”

She added, “I see their true identity is not their past. My goal is to let them see that and get through the process of restarting.”