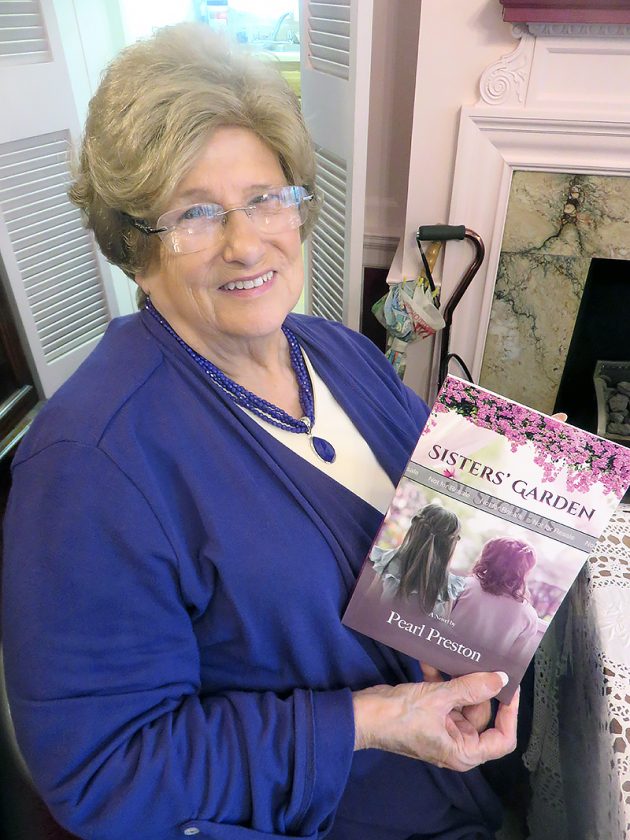 STEUBENVILLE — Kathy Mills said it took her several years to write “Sisters’ Garden of Secrets,” a first-time effort for the local businesswoman who emphasizes the book is about hope despite dark twists and turns in the story.

“Set in an era where childhood abuse was often overlooked, ‘Sisters’ Garden of Secrets’ will take the reader on two young girls’ journeys of self-discovery as they battle to keep hope alive even in the midst of despair,” reads the back cover, in part, of her self-published book released in September and available on Amazon.com.

“When Isabella and Johanna are taken from a loving foster home and placed back into the cruel care of their mother, they must cling to each other for survival. With the odds stacked against their future, they discover that even in a garden of family secrets, the bond of sisterhood can sprout seeds of strength,” the cover message notes.

Mills has dedicated the book to “my beautiful sister and all sisters everywhere who are bonded together by a lifetime of secrets, laughter and tears.”

Written under the pen name Pearl Preston, the novel is fiction but draws on childhood memories Mills said run parallel to her and her older sister’s upbringing experiences.

“In 2005 I thought I needed to write a book,” Mills said, “because no matter what the situation is, through prayer and faith you can succeed. Nobody can tell you you can’t.”

She believes that to have been her experience, as Mills would come to own and run Heritage Home Care Inc., a family business of 28 years. She was a nursing home administrator for 12 years prior to that.

Mills said her story is testimony to the fact that “God lifted me out. You have to remember this is what it’s about — God looks out for us, and I feel this way. He let me and my sister go through the trials and tribulations, and at the end, he lifted us out of poverty, and we did so with love and not hate toward anybody, so therefore, I feel that God lifted me out.” Mills said she became a Christian at the age of 8, “and I still am to this day and always will be.”

Writing a book was never really something she envisioned doing, “but when my sister was diagnosed with terminal cancer, I said we need to do this, so we would sit and reminisce, and she is as much a part of the book as I was,” Mills said of her sister, Bess, who died in recent years.

There were times during the writing process that Mills said she had to abandon the effort “because it was so emotional.”

She added that this was not a one-time thing and that she hopes to write a children’s book.

Asked what she hopes readers will embrace after having read the book, Mills responded, “There’s always a way to overcome any problem that you have through prayer. Just ask God, and when you ask, listen to what he has to say, because sometimes, he says no, so you have to accept that and go on, and do whatever you’re inspired to do, but if you get to a point where you feel there’s no hope, there’s always hope. There’s always hope. Embrace the hope and lean on God, and he’ll show you the way.”