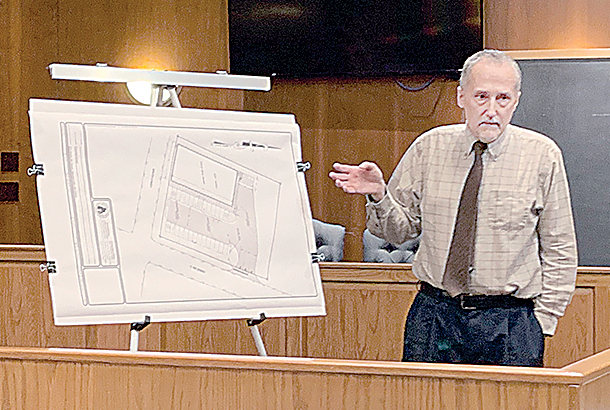 PUBLIC HEARING — Steubenville Urban Projects Director Chris Petrossi said a conceptual drawing submitted by a developer who has expressed interest in the old Grant School property on South Fourth Street shows what the site would look like with a 9,100-square-foot retail store. -- Linda Harris

STEUBENVILLE — The proposed rezoning of the old Grant School property on South Fourth Street is now in City Council’s hands.

The city’s Planning and Zoning Commission held a public hearing Monday on an unidentified developer’s request that the 0.94-acre parcel be reclassified from public/semi-public to B-1 Central Business District, with only two residents — Mayor Jerry Barilla and local entrepreneur Mark Nelson — offering input.

Normally, the panel would have voted immediately after the hearing to accept or reject Urban Projects Director Chris Petrossi’s recommendation, but because the board lacked a quorum, no vote could be taken. By code, that no-vote is interpreted as a positive recommendation, Petrossi explained.

“We still have to go through the public hearing,” he said at the start of the hearing. “We’ll be providing information as well as receiving input from (those in attendance) but we will not be able to make a recommendation to city council.

“This will be forward to City Council with a positive recommendation because the planning commission can’t act on it,” Petrossi said.

A conceptual drawing of the developer’s ideas depicts a 130-foot-by-70-foot building, with about 26 parking spaces and an entrance off Fourth Street. It would have about 9,100 square feet of retail space.

“But the developer has only expressed interest,” Petrossi stressed. “There’s no contract, no agreement. The dealer is waiting until after the rezoning takes place before proceeding any further.”

Petrossi told Barilla if the deal were to fall through there’s always the possibility “somebody else could acquire the property.”

“It would be more valuable to have it rezoned than not rezoned, then,” Barilla said.

After looking at the conceptual drawing, Barilla also questioned whether the project under consideration would impact the alley behind the old Grant School site and possibly affect nearby business owners.

“The conceptual drawing doesn’t mean they will access the alley,” Petrossi replied. “But (they) indicate they are not sure if they will use the alley or not.”

Nelson, meanwhile, said he wanted to remind the panel of concerns he’d raised several years earlier when he’d questioned what they intended to do with the site, “whether we’d settle for the first thing that came along.”

He urged the commission to think about “what fits best in that part of town.”

“It’s an historic part,” Nelson added. “It hasn’t been designated historic yet, but you’ve got the library, the Greek Church, St. Pauls Church and a lot of (period) buildings” that make the neighborhood suitable for historic preservation.

“What it lacks is design standards that fit that area” that would ensure projects adhere to the look and feel of existing properties, he said, adding, “The city plan actually calls for that to be addressed … so parts of our community remain unique.”

In his recommendation, which Petrossi read into the record even though the commission couldn’t vote on it, stated that Steubenville’s land use plan “identifies proposed future land use at this location as downtown commercial, with similar land uses to the east, west, north and south of the site.”

Petrossi noted the site already has water and sewage and rezoning wouldn’t create any hazardous conditions or an isolated zoning district unrelated to neighboring properties.