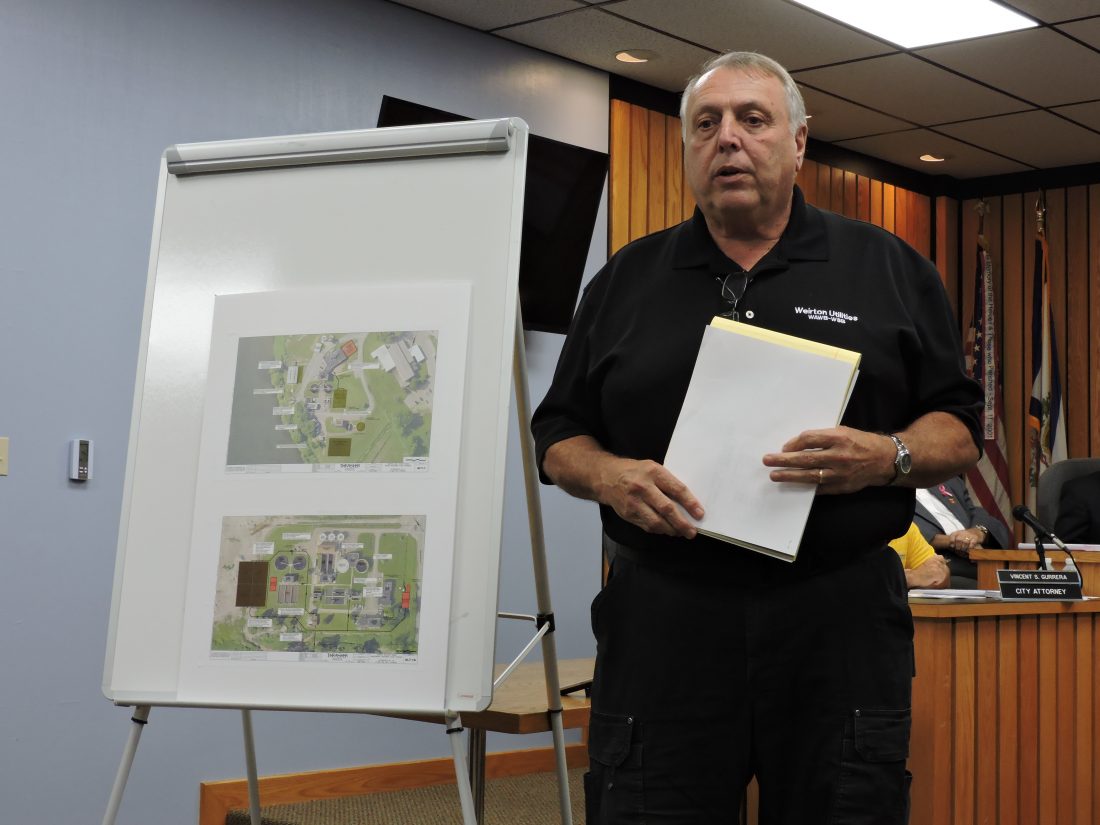 Craig Howell PLANS TO EXPAND MADE — Utilities Director A.D. “Butch” Mastrantoni discusses the plans involved in proposed expansions to Weirton’s utility plants during a public hearing held prior to Monday’s meeting of Weirton Council. Council also approved the third reading of a pair of ordinances authorizing the application for a loan to assist with the design costs for the proposed expansions.

WEIRTON — Weirton Council moved forward Monday with a plan to apply for funding to assist with the design costs for proposed expansions to the city’s water treatment plant and wastewater treatment facility.

No comments were offered from members of council leading up to the vote.

Prior to Monday’s meeting, council held a public hearing to accept comment from residents on this stage of the proposed expansion.

Utilities Director A.D. “Butch” Mastrantoni explained the ordinances were to authorize the application for loan funding from the West Virginia Water Development Authority.

“Council is not taking any step toward the project,” Mastrantoni said, noting the process is similar to anyone going to a bank to apply for a loan.

“These loans are designed to address engineering costs,” Mastrantoni said.

Several residents spoke during the public hearing, with most expressing uncertainty and saying they would like to hear more information on the proposal.

“There just seems to be limited information that’s been out in the papers,” Tom Zielinsky said, adding he feels with a population of just over 18,000, Weirton might not need such a capacity increase as has been proposed.

Blaise Hogan said he has conducted his own survey of residents, and also doesn’t feel the population is high enough to support such an increase.

“We should have plenty of water,” Hogan said. “I don’t know where it goes.”

Some also questioned what kind of industry could look to locate to Weirton which would necessitate at least doubling the service capacity.

Karen Gould, however, said she feels any investment which could put Weirton in a better position for growth would be a good decision.